This time around, the "S" seems to stand for "subtle." That's not the way Apple is positioning it, of course, but as a user who has owned every iPhone but the first, the 6s model appears to be such an incremental upgrade, most customers may never realize the difference. This review assumes that you have some familiarity with iPhones, and cuts to the chase with real-life examples instead of benchmarks

This time around, the "S" seems to stand for "subtle."

That’s not the way Apple is position it, of course, but as a user who has owned every iPhone but the first, the 6s model appears to be such an incremental upgrade, most customers may never realize the difference.

Of course, that’s what happens when a tech company pushes the envelope for so long. With a "midcycle refresh," the big improvements will be most noticeable only to that small segment of the population that pushes its products to the limit.

So, of course, the new iPhone will mature with new software updates this year, and eventually, I’ll wonder how I lived out these changes. One day in, I’m already getting used to the "3-D Touch feature," and wondering why major app players like Facebook haven’t upgraded to take advantage of it.

But again, it’s only been 24 hours, so here are my initial reactions to the new iPhone. Note: this review assumes that you have some familiarity with iPhones, and cuts to the chase with real-life examples instead of benchmarks. Remember, this model looks and feels identical to the outgoing iPhone 6 (but is supposedly less bendy if you’re silly enough to sit on it). I’m only talking about the changes that apply to the newest 6s.

What else does the "S" stand for? Read on:

The S is slightly speedier

According to Apple, yes, some 70-90 percent over the previous model. In the real world, it’s hard to say. I noticed that iPhone 9 slowed down my iPhone 6, so in many ways, the iPhone 6s now is running like it "should." Specs don’t lie, of course. Some of its features are processor intensive and will only work properly on a top of line device this this: if you want smooth 4K video, you need horsepower. And calls sound great on Verizon’s 4G network, especially if you’re calling another iPhone user with LTE data turned on. Speaking of data, the iPhone 6s operates significantly faster on Verizon’s 4G network than the wifi inside my own house.

On a day-to-day level, though, you may not feel like the 6s is opening or closing apps faster (see above for the short video I shot). I didn’t notice a tangible difference in any of the apps I use. As with all computers – and don’t forget the iPhone is more a computer than a phone – developers will find ways to eat up the processing power and memory. Note that the new phone’s battery is actually a hair smaller than the outgoing one. Unless iOS9 and hardware improvements change something under the hood, I’m seeing the same battery life on the 6s as I did with the 6 when it had a new battery, although let’s all remember just how much we’re tethered to these things.

The S is for shutter 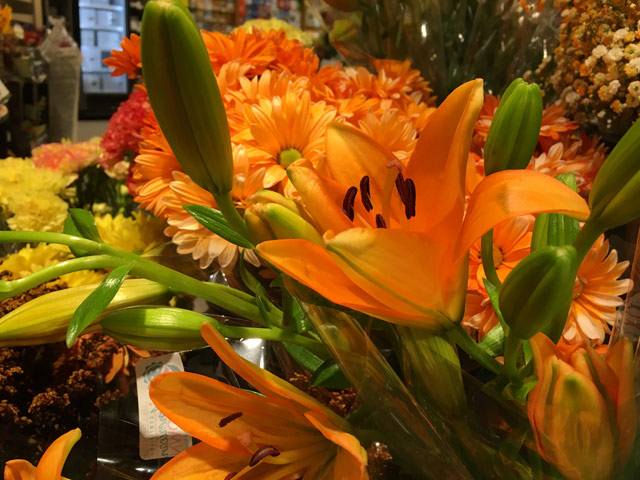 Really, the camera was what I was most excited for on this new model. Not just the megapixel bump, although that helps with crops, but the better low-light performance and smarter imaging processor. I continue to dispute that the iPhone 6s takes pictures on par with a DSLR … my micro 4/3 camera with its Leica lens doesn’t even do that, but these photos are very, very good. 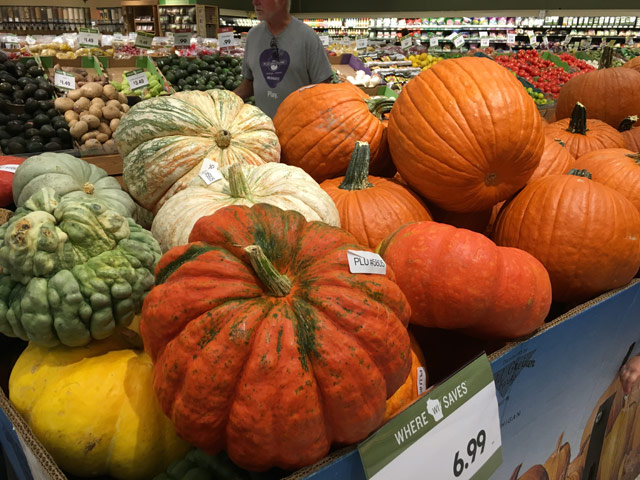 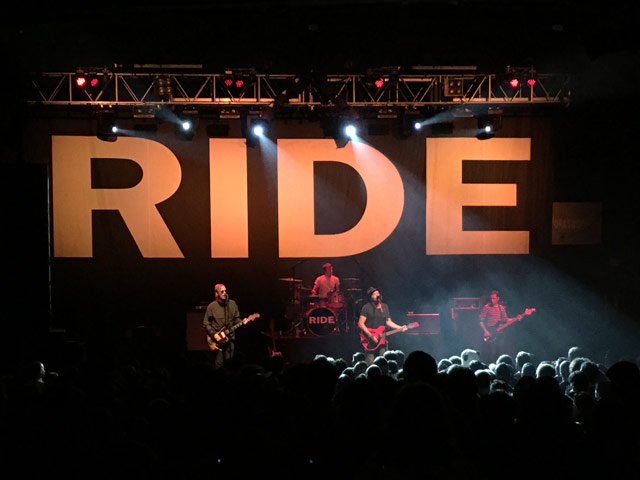 The front facing camera, with its "Retina flash," is an obvious real-world upgrade, too. Selfies no longer look terrible, but photos I took (and cropped) at a concert last night in challenging light conditions still looked sub par. Photos taken in good lighting look very sharp. But not DSLR good.

Unsurprisingly, the "Live Photos" feature is underwhelming. In the Apple demos, you see a rippling lake or a winking eye. In practicality, you’re more likely to get a mumble or some motion blur. I’m not sure this will catch on, but I’ll have to keep playing with it. Nothing I’ve shot so far made we want to keep that function on.

So what about 4K video? Well, like everyone else I know, I don’t have a 4K TV or computer monitor capable of playing such high-res video. In other words, on the phone, it looks the same, but rest assured, it is not. But, as I explain in my conclusion below, I like to future-proof my video projects. When I’m old and want to look back at my life, I want to know that I used the highest quality format available to me. (Thinking back to our VHS family video from the ‘80s, I know that this really matters.) And, it won’t be long until 4K displays are commonplace. I saw them at CES a few years ago; the future will be very, very clear. I’ve included a demo clip I shot in 4K, uploaded to YouTube, but I’m pretty sure it’s been compressed and isn’t really so high-res.

The S is for sensitive 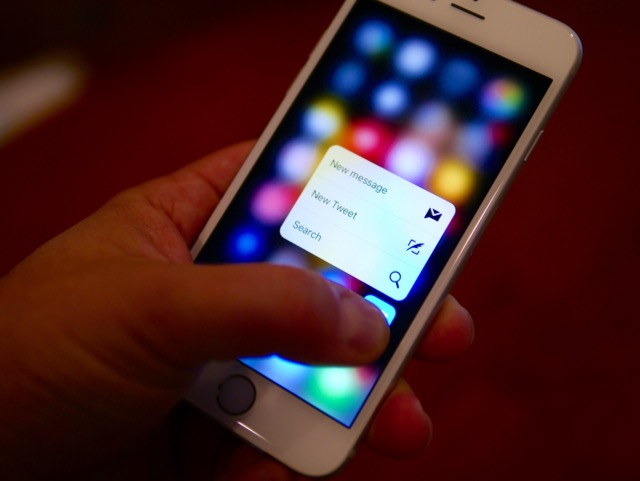 Apple’s big sell is on its haptic feedback display, which it calls 3-D Touch. It’s pretty neat. If you push a little harder on certain icons, you get previews or additional options, sort of like a right-click on a mouse. You also get a subtle vibrate that feels different than the regular vibrate, but in iOS 9.1 it’s not yet implemented everywhere. I was hoping it would kick in while typing (it doesn’t), and the new technology in the screen accounts for a minimal increase in phone thickness and weight, but it’s virtually imperceptible and my case still fits fine.

I like this feature; you can send a tweet without opening Twitter, or preview an email without opening it. I’m looking forward to seeing how Apple expands its functionality. 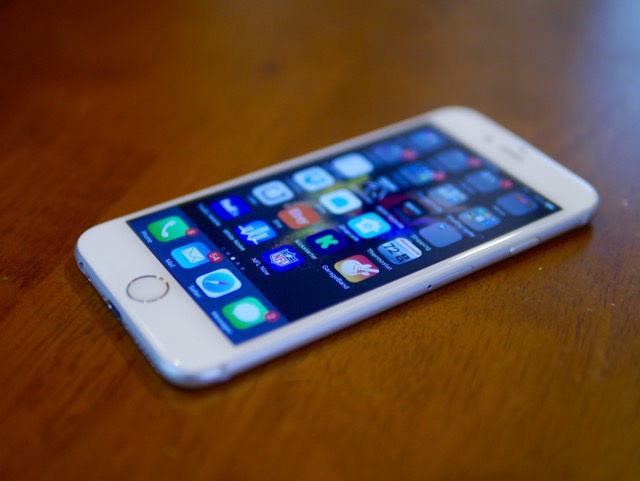 Like with most brand-new iPhones, the question of whether or not to buy comes down to what you’re using now. Let’s get this out of the way, if you have an iPhone 6, there are only two reasons to upgrade: a better camera and a fresh battery. Beyond that, you might as well wait for the iPhone 7.

Consider this: the reasons your existing phone won’t hold a charge all day anymore is because you’re wearing it down. All cell phone batteries only have a finite number of available cycles, and you’re running out. Since you can get well over $400 on the used market with a site like Gazelle, you might consider cutting your losses and starting over with a fresh battery. That’s the main reason I swap out phones every year: I use mine for work and for play, and amortized over the cost of a year, even with off-contract upgrades, it’s still a monthly expense I need in my life.

Same goes for photography. I look at baby pictures taken with my old iPhone 3G in 2008, and the quality is sorely lacking in retrospect. Personally, I like to future-proof my technology as much as possible. I want the best available video and camera I can keep in my pocket, because eventually I’ll be able to appreciate why it’s the best.

If you’re wondering whether to upgrade from an older iPhone, that’s a much easier value proposition. Not just for the reasons above, but you’ll find the 6s faster and more durable than what you currently have. Obviously, I can’t speak to Android devices. If you like what you have, you should keep it.

The other thing going on here is iOS9, which is also an extremely subtle upgrade from the last operating system – my favorite enhancement is "low power mode," that keeps iPhones alive for seemingly forever. Keep in mind that while Apple allows it to work on older phones, I’ve seen that it doesn’t run especially smoothly. If you plan on saying in the iPhone/iPad/Mac ecosystem, then you have to be comfortable running the newest software on the newest devices. If you just want a phone that works with a web browser, you have plenty of cheaper, less connected options.

Is the iPhone 6s a great phone? Absolutely. Is it Earth-shatteringly chocked with amazing new features. Not really. But something tells me that Apple will have very little trouble selling a gazillion of these, even if this phone is just a bridge to the next big thing, still a year away.

A conversation with N.W.A. founding member and technologist Arabian Prince