Five years ago, we first told you about Izzy Jaecks, the now full-time shoeshiner at Stag Barbershop, 3064 S. Delaware Ave. In 2011, it was a once-a-week gig for the former Miss International Bootblack, but now Jaecks is as part of the shop as are its barbers.

Five years ago, we first told you about Izzy Jaecks, the now full-time shoeshiner at Stag Barbershop, 3064 S. Delaware Ave. In 2011, it was a once-a-week gig for the former International Ms Bootblack (yes, that’s a thing), but now Jaecks is as part of the shop as its barbers.

"I opened Stag Barbershop with the idea to offer traditional barber services tailored to suit the unique character of every man," says Stag owner Jess Stern. "Haircuts and shaves were essential but something was missing. When Izzy approached me with the idea to bring the shoe shine back to the barbershop, it was a no-brainer."

Says Stern, "She is a master of her craft."

As Stag readies for its "Shave The Date" event on Nov. 1 to raise money for the Movember Foundation, we caught up with Jaecks to see how this job has grown and evolved, and if being a professional bootblack is a life-long journey.

OnMilwaukee: Bringing in a bootblack was an experiment for Stag. How did it grow into a full-time job?

Izzy Jaecks: I was here one day a week for a little over three years. Everything was going well enough that I was able to give it a shot going full-time. I've been full-time since Oct. 1, two years ago.

There aren't a lot of upscale men's barber shops that have a full time shoe-shiner right?

The only other barber shop that I know of at all with a shoe shiner is in Indianapolis. There might be others, but I don't know.

Why do you guys make it work?

I mean, to a great extent, Stag is crafted to be an experience. There's so much emphasis on customer appreciation and customer satisfaction.

You're doing other leather stuff, as well?

Is that different than the guy at the airport who shines shoes?

Absolutely, yeah. Also, a guy at the airport, you're probably only going to see that one guy once or twice a year. Because I see the same people over and over again, I know what I did the last time with their shoes. If maybe something different needs to be done again. I've actually crafted a game plan based on the type of leather. 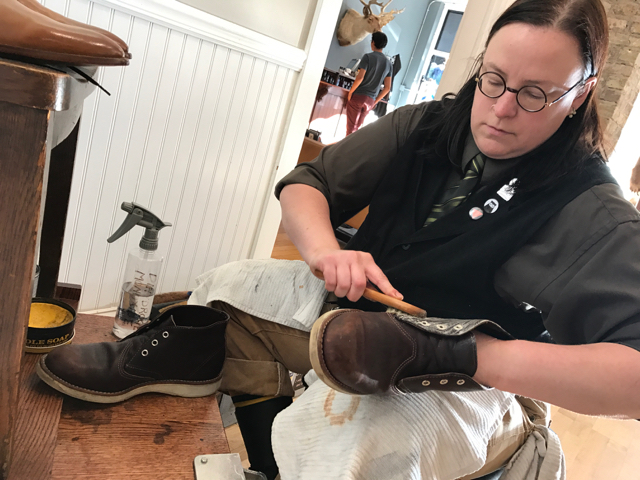 So it’s a relationship?

Are you still doing leather events outside Milwaukee?

This past weekend I was in Indianapolis for Great Lakes Leather Alliance, where I was judging the bootblack competition.

I live in Bay View. I work in Bay View. We are a part of the Bay View community very specifically, so that's important to me.This is close to home. I'm part of a larger community experience.

Are you still learning, or are you at the top of your game?