Third grader James Reimer has lived in the Riverwest neighborhood his entire life, and now, because so many people are suffering, he wants to do something to help his community.

Third grader James Reimer has lived in the Riverwest neighborhood his entire life, and now, because so many people are suffering, he wants to do something to help his community.

On Saturday, June 6, James will attempt to ride his bike for six hours straight up and down Fratney, a Milwaukee Active Street, under the supervision of his parents, Matthew and Hannah.

He is calling his ride the "Riverwest Ride For Charity" and plans to raise money for the Riverwest Co-op and the River Revitalization Fund.

James, who attends the University School of Milwaukee, created the ride for a school project and after learning about Captain Tom Moore, the 99-year-old army veteran who raised $40 million for Britain’s National Health Service charities after pledging to walk 100 lengths of his garden in celebration of his 100th birthday.

"James would really love for his project to 'go viral.' He doesn't know exactly what that means, but he knows that's good," says family friend, Laurie Walczak Schleicher.

For more information, go to jamesridesforcharity.org 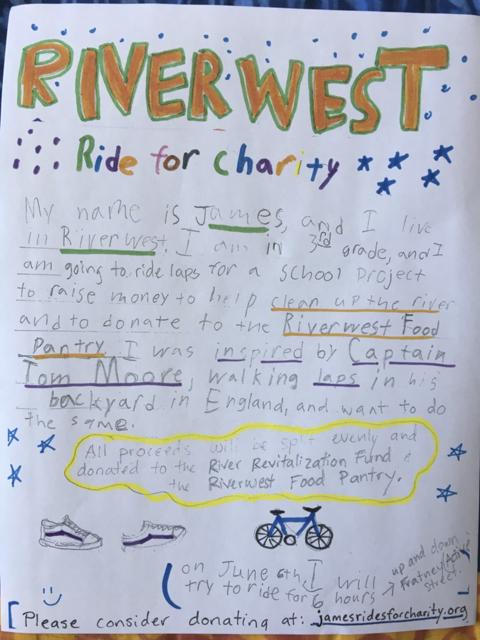