On Monday, the City of Milwaukee's Historic Preservation Commission considered a resolution to create the Jefferson Street Historic District on the west side of Jefferson Street between Mason and Wells Streets in East Town.

On Monday, the City of Milwaukee’s Historic Preservation Commission consideref a resolution to create the Jefferson Street Historic District on the west side of Jefferson Street between Mason and Wells Streets in East Town.

The district would include all the buildings on that side of the block, with the exception of the one on the corner, which is home to Taylor’s.

Because of a technicality in the slide presentation, a vote on the measure was held until next month’s meeting.

If it passes the HPC, the full Common Council must also approve the district for it to become official.

Although the stretch of properties is part of the East Side Commercial District that was added to the National Register of Historic Places in 1986, this new designation would require permission from the HPC in order to make exterior alterations to the buildings on the street.

"With changes in ownership, properties for sale, and tenants ‘picking away’ at historic features," said Carlen Hatala, of the City of Milwaukee’s historic preservation office, "it seemed time to move a local designation forward so that the street can be preserved."

The district was proposed by Ald. Robert Bauman, in whose Aldermanic District the properties are located.

And there are some beautiful and certainly historic properties on that block, beginning at the south end with the former George Watts & Son, a terra cotta-laced gem designed by Martin Tullgren, and including, among others, the 1860 Keenan House designed by Edward Townsend Mix and two 1850s properties built as houses by William A. Webber.

Here are some details on each of the properties included: 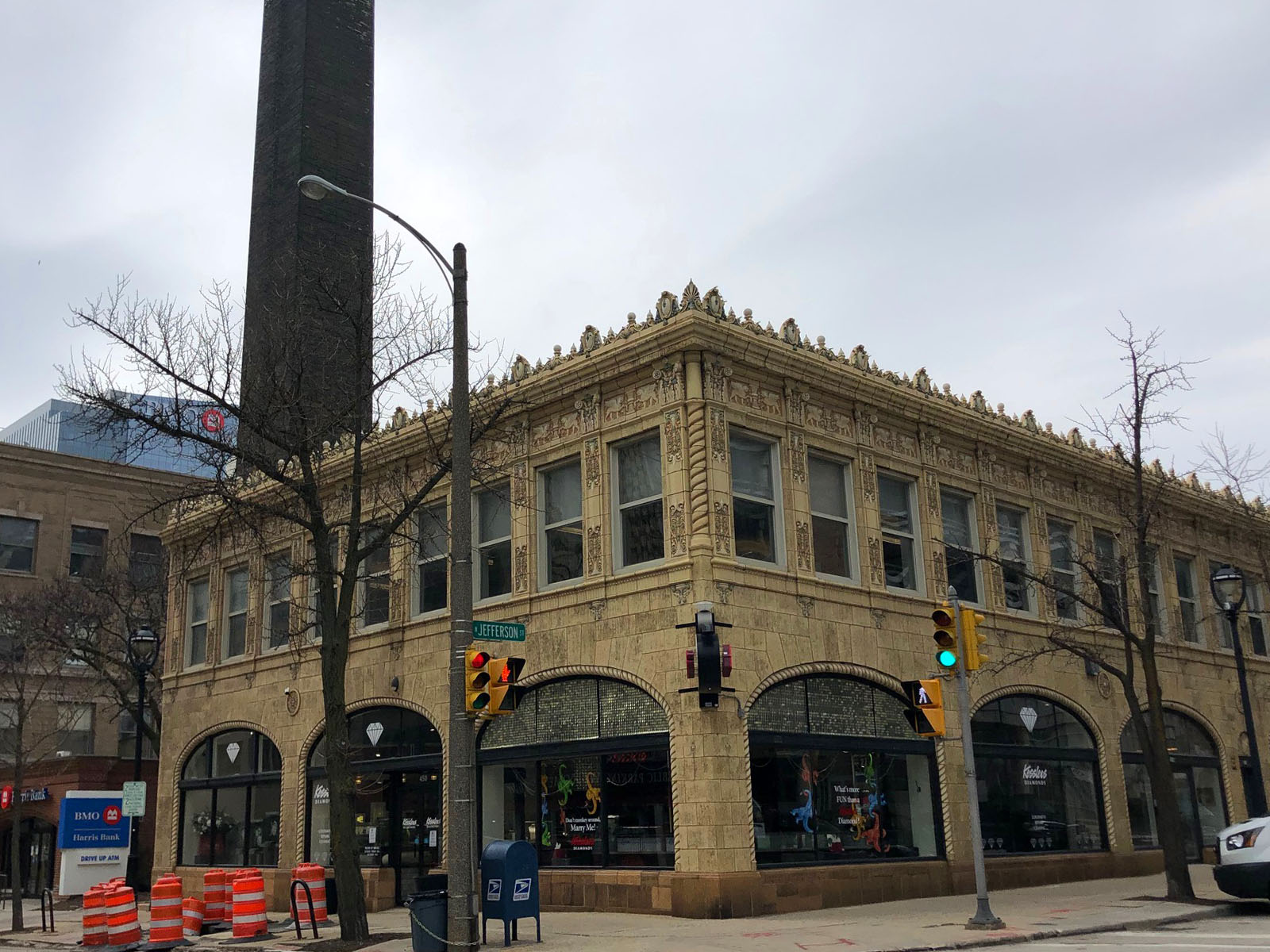 This is one of Tullgren’s terra cotta masterworks, along with the Bertelson Building, 2101-11 N. Prospect Ave. (1927), and the architect’s own building (1925) on the southeast corner of 60th and North (though his Milwaukee Western Fuel Building, 2150 N. Prospect Ave., is a also a gem), with decoration created by Illinois’ American Terra Cotta and Ceramic Co. Crockery and glassware dealer Watts spent a whopping $120,000 to build the unique mix of Italian Renaissance structure with Spanish elements and what terra cotta expert Ben Tyjeski called a, "jewelbox storefront," that was home to the company until its demise in 2016. Now it is home to Continuum Architects and Kesslers Diamonds. 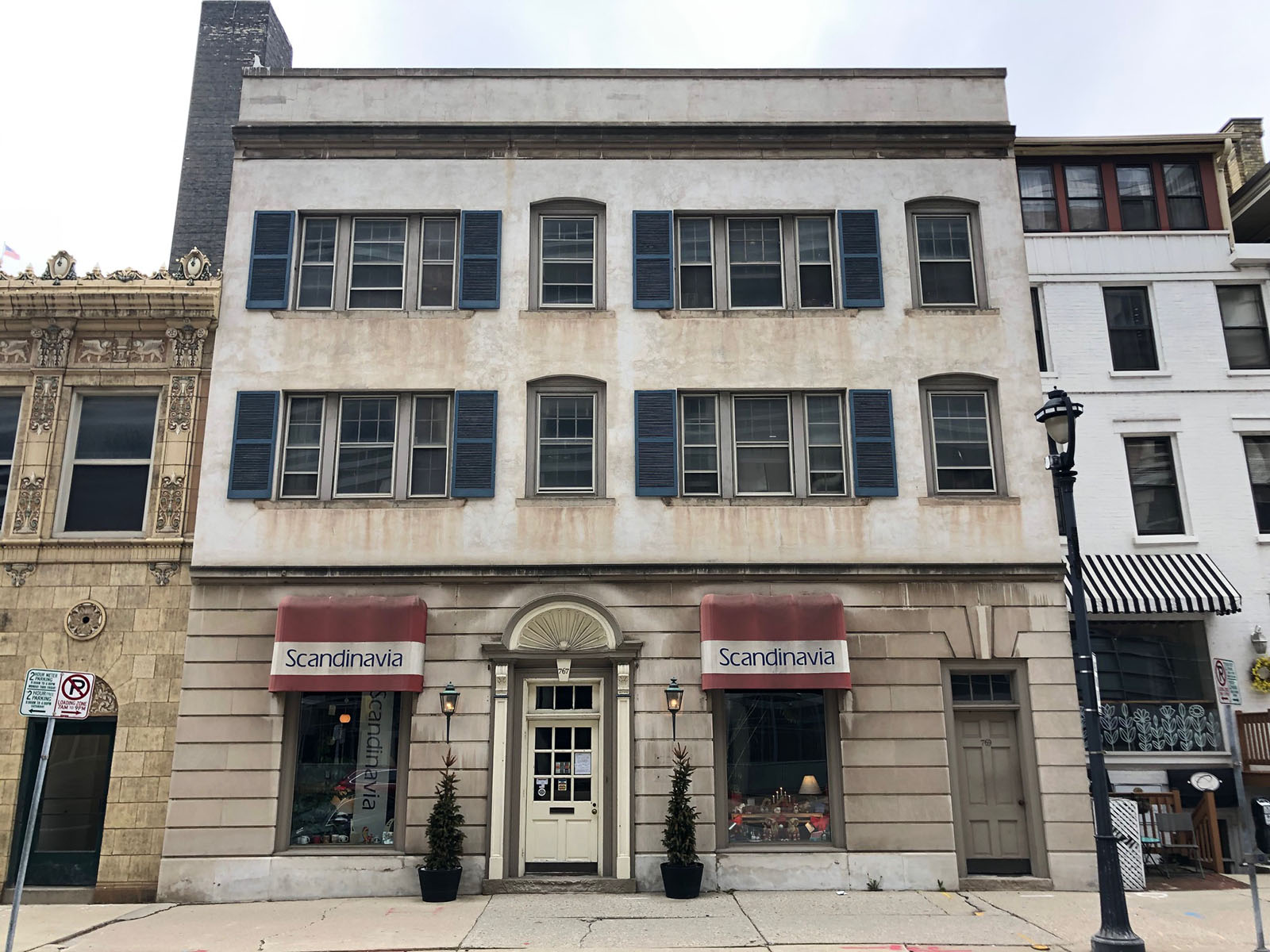 Built as two parts of a three-unit rowhouse in 1852, the third unit survives to the north. It was built by one of the Home brothers, who owned the eponymous grocery store on the site now occupied by the Watts building. Interestingly, the building was occupied or a time by George Mann Niedecken, the renowned interior architect and painter who is perhaps best known for his work with Frank Lloyd Wright (and for his design of the lobby of the Milwaukee Athletic Club, a block west). There’s also a three-story building, occupied for a while by Niedecken, behind the one you can see on Jefferson Street. This property has been home to Scandinavia Fine Furniture for many years. 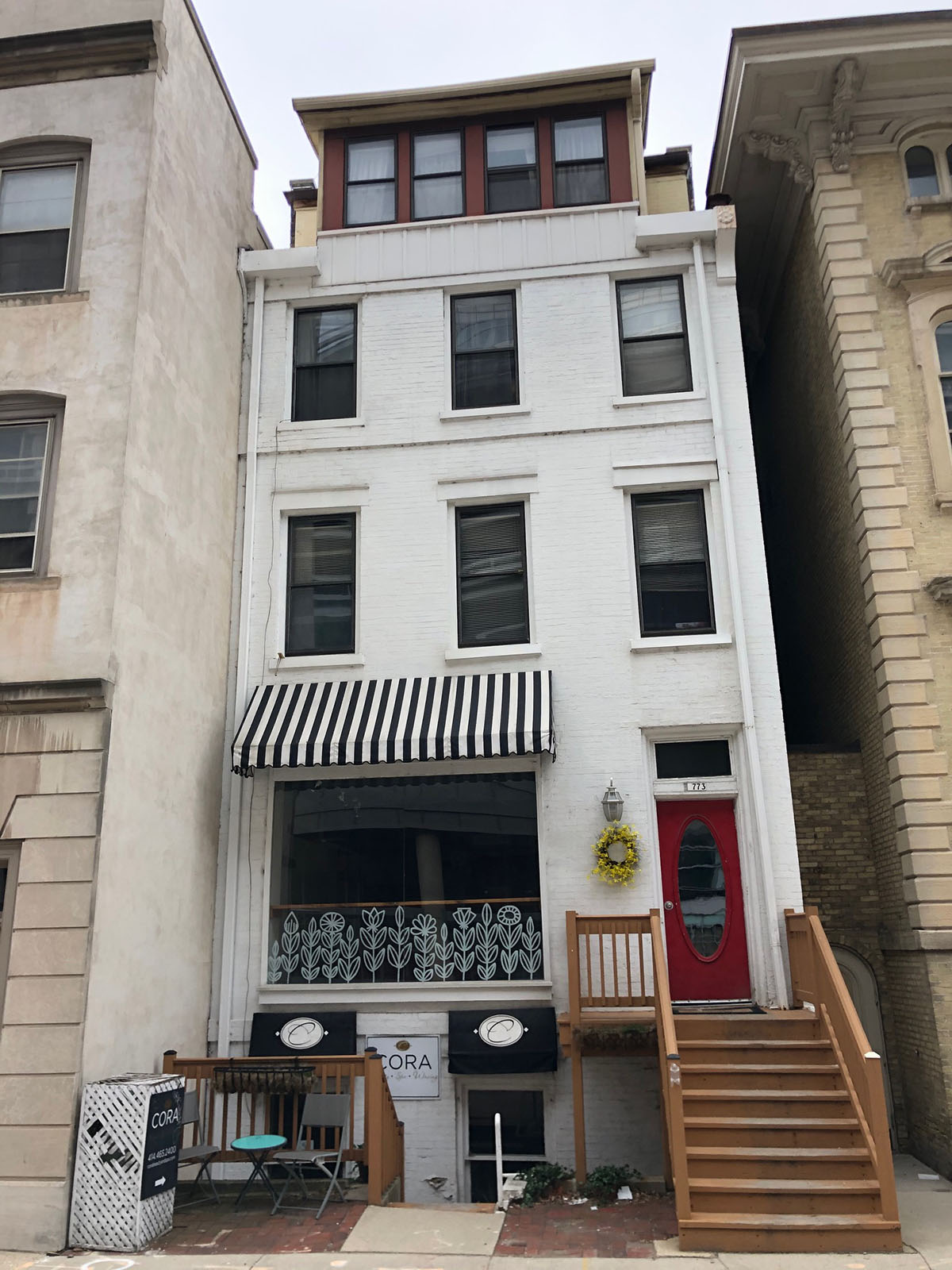 The third part of the Federal Style row house mentioned above is this building, which was separated as part of a 1916-17 renovation of the other two into commercial properties. This is the oldest building on the block and generally maintains its original feel – despite some changes, including the addition of an extra floor and a gabled roof – with dormer, staircase up to the first floor and raised basement with an areaway in front. This one, too, has a building in the rear. Now home to Cora Beauty and Spa. 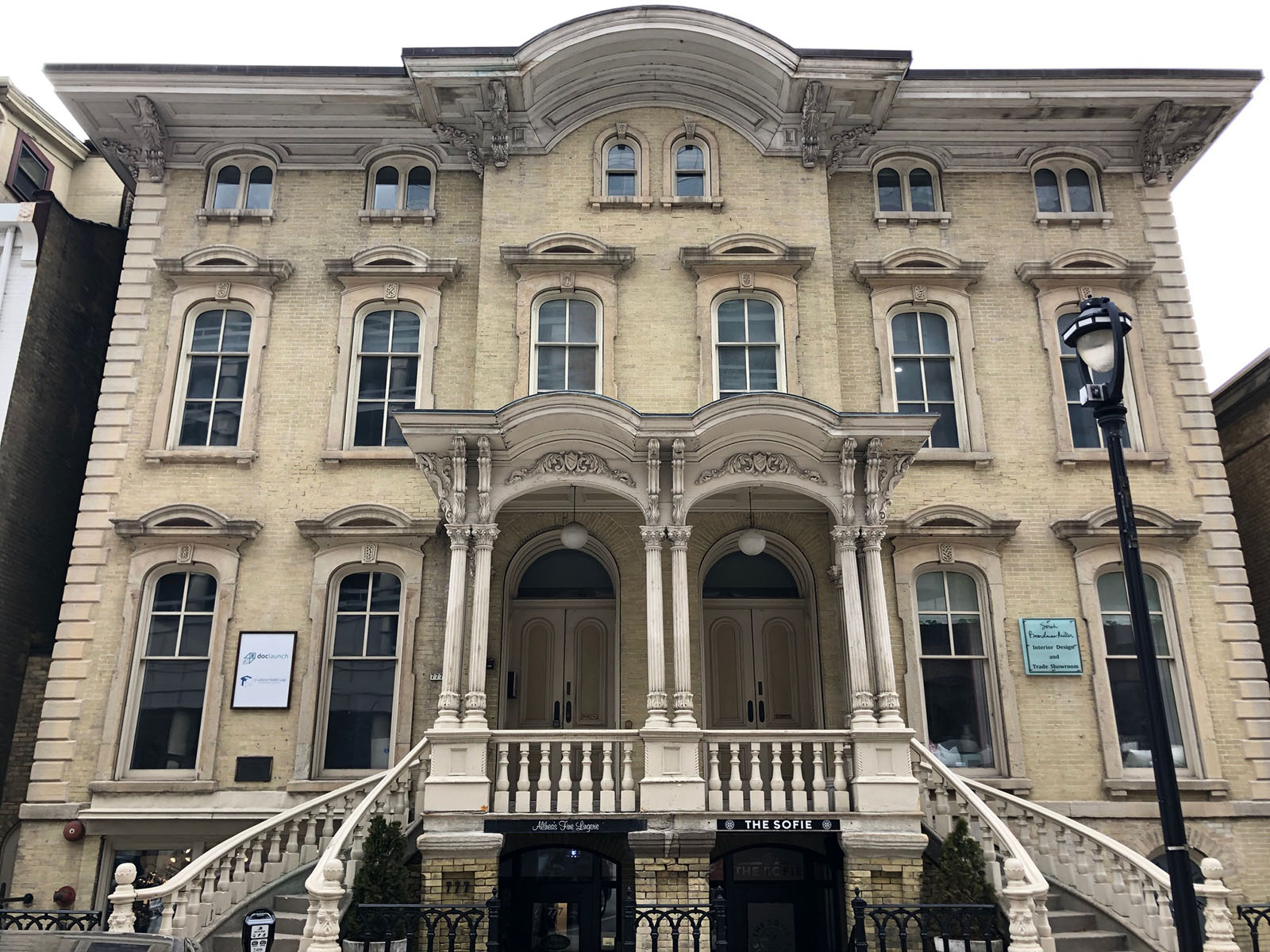 The Italianate cream city brick building was designed by influential Milwaukee architect Edward Townsend Mix for politician and Northwestern Mutual veep Matthew Keenan and dates to 1860. The row suffered a massive fire in 1984 that led to a complete remodeling of the interior and the construction of a large addition at the back. Fortunately the beautiful balustrade out front has been restored. The building now houses offices, the Sophie cocktail lounge, Althea Fine Lingerie and Sarah Boardman-Miller Interior Design and Trade Showroom 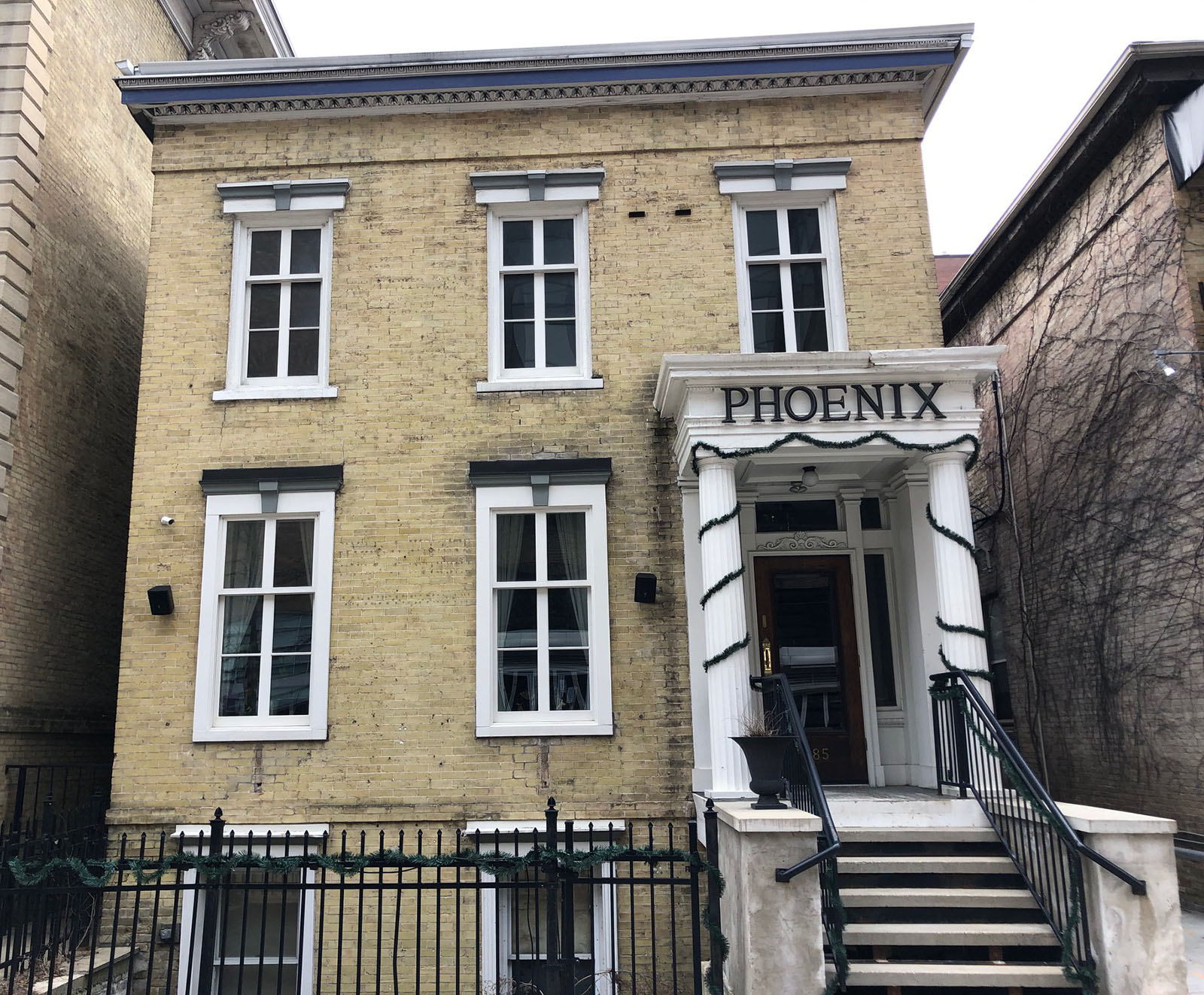 One of the last Greek revival houses left in Milwaukee, it is also surely among the oldest buildings in the city. Batavia, New York native Webber built this house and the one to the north on land purchased from Solomon Juneau in 1835. There were renovations made in 2016, according to the city’s Historic Designation report, including, "the columns were replaced and the wing walls were rebuilt, and the bow-front windows were removed and replaced with facsimiles of the originals." Now home to the Phoenix Cocktail Club. 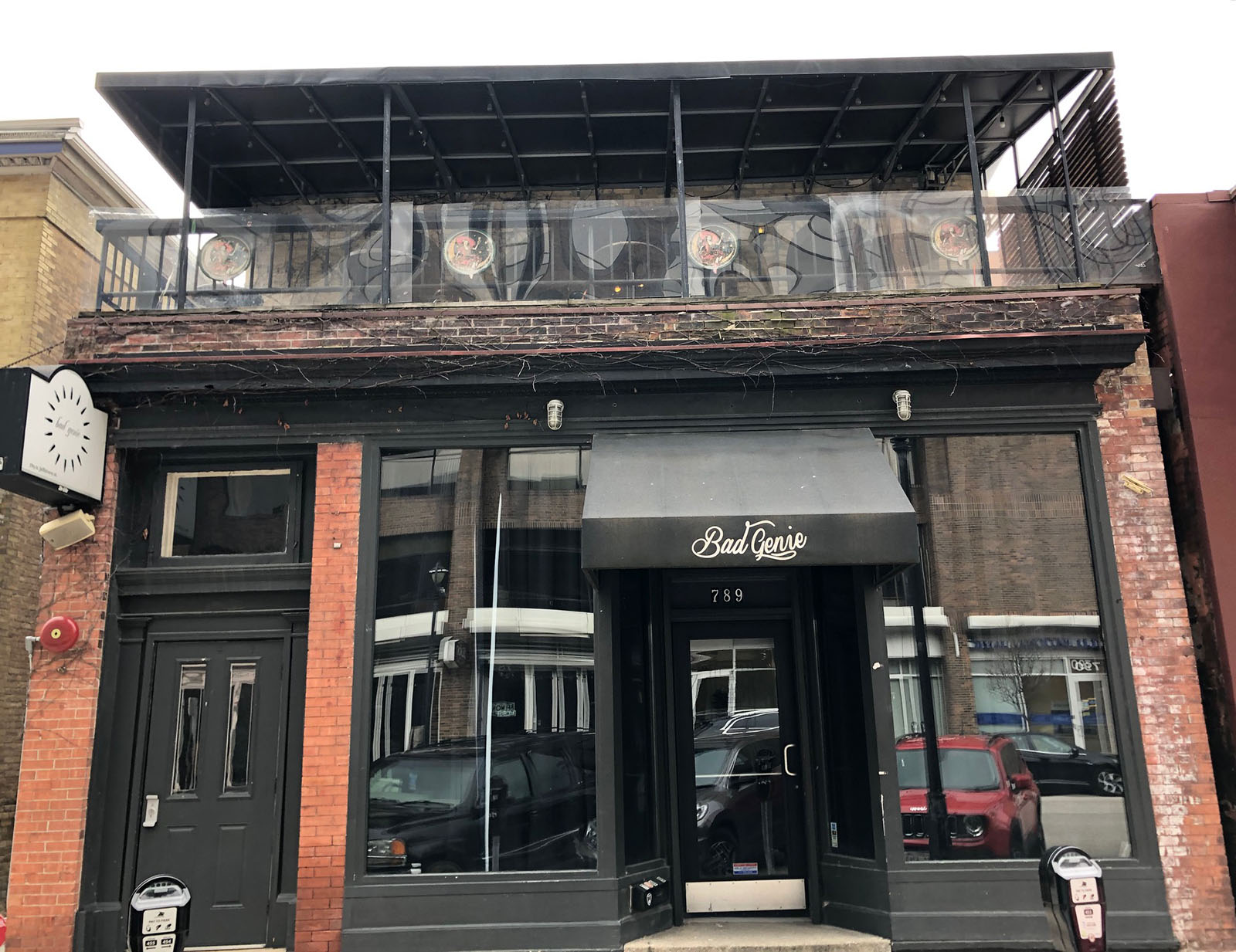 Webber built this matching house, too, and like its neighbor, it has been altered over the years to accommodate retail uses. This one got its storefront in 1909. The report notes that it, "still features the cubic massing and hip roof but the tall chimney on the north roof slope, still extant in the 1984 Central Business District survey photo, has been removed. Up until recently, the upper story windows were intact and featured three rectangular openings with one over one sash and prominent lintels. Of note is the same foliated ornament under the eaves as the Webber house next door." It is currently home to Bad Genie.

The block full of gems is surely among the most eye-catching and architecturally important and captures the flavor of 19th century Milwaukee. Considering the beautiful structures demolished directly across the street – including the Layton Art Gallery and the Phoenix Club – for more recent development, it makes sense to protect what remains as best as possible. 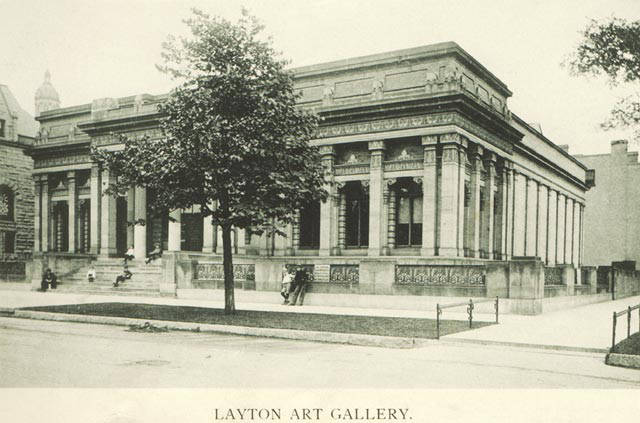 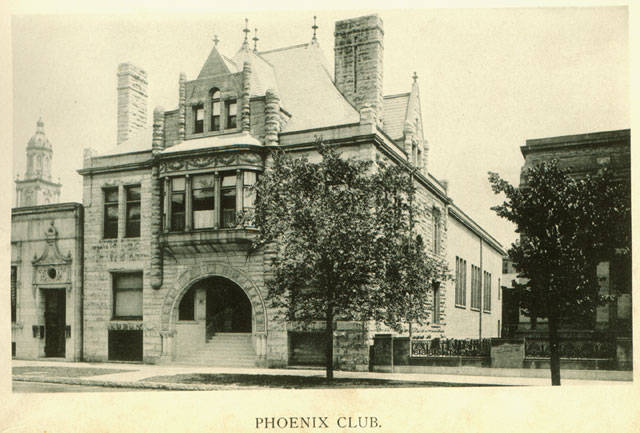 "The Jefferson Street Historic District contains an architecturally and historically significant collection of residential and commercial buildings constructed between 1852 and 1926," notes the commission’s report. "It is the city’s oldest surviving streetscape of first settlement period residences in the city. Within the district are outstanding examples of Greek Revival, Italianate, Federal, and period revival. They show how the styles evolved from the simple to the elaborate over the course of time.

"The works of locally important architects are represented such as Edward Townsend Mix and Herbert Tullgren. Historically the district represents significant contributions to the development of Milwaukee in pioneer residential settlement as well as transitioning into what was known as a fashionable arts and women’s oriented retail district. That owners still consider this an important street is shown by the fact that the fire-devastated Keenan house was rebuilt rather than razed."