Who says you can't go home again? Violent Femmes drummer John Sparrow is finding his way back to his alma mater, South Milwaukee High School, as part of the band's five-city Viva Wisconsin tour this month. We went back to the school recently to find his old locker.

Violent Femmes drummer John Sparrow is finding his way back to his alma mater, South Milwaukee High School, as part of the band's five-city Viva Wisconsin tour this month.

The band plays at the South Milwaukee Performing Arts Center – which is attached to the high school and is the home of the school's music and theater departments – on Friday and Saturday, Oct. 20 and 21. 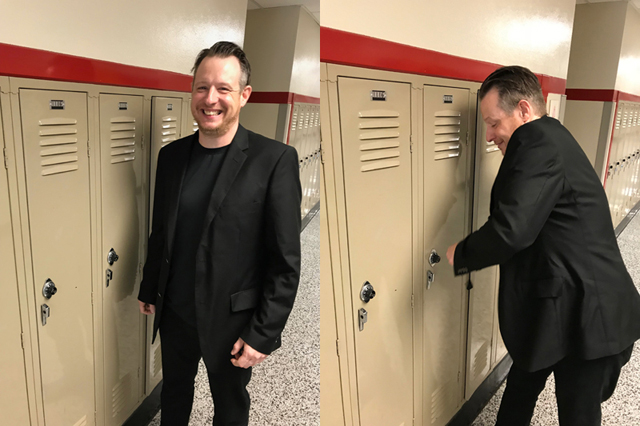 Sparrow, who has been with the Femmes for 12 years, grew up just a few blocks north of the school, which he attended from 1990 until 1994.

He assured me that his permanent record at the school was clean and that he wasn't sitting on a cache of long-overdue school library books at home, which – based on the reception he received – appears to be true.

Recently, Sparrow flew back to South Milwaukee for a full day's slate of classes, talking to different groups of students.

He took a break to chat and to find his old locker with OnMilwaukee...

Tickets for the shows are available here.