This segment of Milwaukee Talks answers all the questions you have for local, soon-to-be-famous reality TV star, Kent Knapp. What was it like filming the show? Is he rich now? The first two episodes of "Milwaukee Blacksmith" will air on the History Channel this Tuesday, Aug. 23.

Kent and Shannon Knapp have a life together that was destined to be documented. The couple, who live in Bay View, have been together for 26 years – since they were 17 years old – and lived in New Orleans for 10 years where they had four children.

The Knapps returned to Milwaukee in 2005, and Kent, who started blacksmithing at the age of 19, opened his own business, The Milwaukee Blacksmith, 518 E. Erie St. The couple later had two more daughters which brings the age range of their kids between 1 and 23.

Today, the four oldest children – Zoe Rae, Miles, Birdie and Oscar – work in the shop with Kent, heating and twisting iron, creating works of art that can be seen in places like Becker Villa and The SoHi Building, and Shannon serves as the business and social media manager when she’s not wrangling toddlers Dharma and Tashi.

A few years ago, The Bay View Compass ran a photo of the Knapp family – who refer to themselves as "Knappkins" – standing in front of a fire, and a friend mentioned they looked like they should be in a reality TV show.

"I said, ‘You’re right,’ and started doing some research," says Kent. "About seven or eight months ago, we got a call from NorthSouth Production Company, telling us that the History Channel was interested in doing a show about us."

After four surreal months of filming in secrecy – something that was difficult for Kent who enjoys conversation and is a self-proclaimed self promoter – the History Channel completed 10 30-minute episodes of "Milwaukee Blacksmith." The first two will air back-to-back on Tuesday, Aug. 23.

The Milwaukee Ale House will host a premiere party at 7 p.m. The event is open to the public and will feature the return of Milwaukee Brewing Company’s Black Iron beer, which is named after Kent’s shop and features his face on the packaging.

OnMilwaukee recently had a conversation with Kent about the process and rewards of filming a reality TV show that focuses on his work and family.

OnMilwaukee: What was the process of filming the show like?

Kent Knapp: A production crew of 15 came to Milwaukee. There were camera and sound guys, producers, directors. They were in the shop, filming, six days a week, about 10 hours a day. I also had to spend another 30 or 40 hours a week on projects that are the "big reveals" in the show.

In total, it took four months of production, January through April, and there were lots of sleepless nights and weekends. We had to shut down the shop for anything else and suspend classes at the School Of Iron.

Was it exhausting for you and your kids?

Yeah, the Knapp crew was pretty burned out by the end, but we got ‘er done. I estimate we did about a year's worth of work in four months.

Was it a good experience for you and your family?

Absolutely. Now that we’re back doing our regular work, we are more efficient than ever, and the kids have stepped up and become an integral part of the shop. I couldn’t be happier.

Is the show mostly about your work as a blacksmith, or is it also about your family?

The majority of the filming took place in the shop and some on location in Milwaukee for the "reveals." We did a few short scenes with Shannon and the babies, but mostly it’s myself and the four kids doing the work.

Is there any drama in the show?

The show is about the work it takes to run a family business and how to get through day-to-day operations, but yes, there is some interpersonal drama. Nothing was coached, which was really important to us. NorthSouth did not try to make us into something we’re not.

What kind of drama is in the show?

There’s some strife among the kids. Shannon and I expect a lot from these children being that they are junior adults now, and we push them hard. 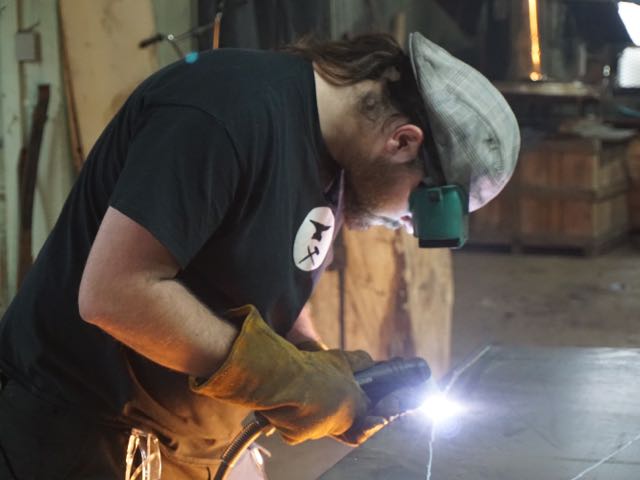 What was it like being in front of cameras so many hours a week?

We’re a high-profile family and have done a lot of spots with the media, so it was pretty natural for us. However, after your 40th or 50th hour of filming for the week, there were moments of frustration. But we got through it because we know that anything worth doing is hard. I pushed myself, and my kids, harder than I ever have. I enjoy a life of balance, but this is what we needed to do and that’s all that mattered.

Have you seen the episodes?

I have seen half of the episodes. They are still working on editing them. I get to work pretty closely with the editor, and they still stop back in Milwaukee every couple of weeks for interviews. But I've seen everything that’s complete so far, and I'm extremely happy. They did a great job portraying us, our clients and Milwaukee.

Is this all pretty surreal for you?

It is pretty surreal. It’s crazy cool. As I mentioned, we’ve done local TV before, but the quality of this show blows my mind. When I see the show or the commercials, it feels like a dream. Some days, I actually wake up and think, "Did that really happen? Are we going to be on a History Channel TV show?"

Shannon and I have had a lot of fun lately, when we can get a sitter, hanging out at a local neighborhood watering hole with 15 bar stools. They put the History Channel on when we’re there and when our commercial comes on, the whole place goes nuts for 15 or 30 seconds.

You and your family had to keep the show a secret during the entire filming process and for two months post-production. Was that difficult?

It was really, really hard to keep my mouth shut. We’re big self-promoters and always have been, so keeping my mouth shut for six months about the biggest thing I've ever done in my life was extremely difficult.

However, because I was working my butt off, I wasn’t out on the town too much, so that helped. I had to drop silent in my blacksmith Facebook groups where I am usually very vocal with blacksmiths from around the world. I got a bunch of messages from blacksmiths in the group, wondering if I was OK, if I had closed the shop, if I was dead.

It was also strange locking the door to the shop. We are usually very welcoming to the public and keep our doors open for people to stop by, watch us work, maybe buy a T-shirt. It was tough keeping people out, but we’re past that now.

Has it been a relief to return to the regular routine, more or less, this summer?

Yes, it’s been nice. While we were filming, I didn't see much of the babies. When we finished production, I gave the family a month off and then we slowly worked back into the routine.

How are people responding to your new fame so far?

Some have warned me not to get too big for my britches. But mostly, it’s us doing a lot of self-promoting right now. I went into the bank for the business recently and showed the bank manager our commercial, and he said, "Wow that’s really cool. Are you guys hiring?"

Also, we’re not rich now. We received a small amount to do the show, but when a show is in its infancy, you’re not making huge dollars per episode. We have to prove our worth, and we have our fingers crossed that it does well and life can be more comfortable for us. We certainly have the hustle, and we do everything we can to better our lives day by day and this is a part of it.

Everything I do is to create a legacy for my family and to provide for my kids long after I’m gone. I think we’re headed in the right direction.