It's common to see honorees from cities like Madison, Milwaukee and Minneapolis. But it's far more unusual for a small-town chef to hit the radar of the JBF team. That's just part of what makes Chef Luke Zahm of Driftless Cafe in Viroqua so special.

This year’s James Beard semifinals were filled with pleasant surprises. Wisconsin made a great showing, with four nominations from Milwaukee and an additional four from across the state.

Even more impressive is that one of the semi-finalists was Luke Zahm, chef and owner of Driftless Cafe in Viroqua, a town of just over 4,000 people.

Since the average population of Midwestern cities with James Beard nominated chefs is 220,000, it's common to see honorees from cities like Madison, Milwaukee and Minneapolis. But it’s far more unusual for a small-town chef to hit the radar of the JBF team. Fortunately for Zahm, there were eyes on his work. And it’s given him an opportunity to tout the unbelievably bounty that comes from the Driftless Region of Wisconsin.

"It’s something you just don’t think is possible in a town of that size," says Zahm. "I’m overwhelmed. I have such a sense of respect for all the purveyors in the area, who’ve provided the food I work with. And I have such extreme pride for our staff."

Viroqua may not be famous for its food scene, but thanks to chefs like Zahm, they’re gaining a reputation for their ingredients. And it’s about time.

The glaciers of the last ice age stopped short of the area, resulting in a landscape of winding rivers, meandering valleys and rolling hills peppered with sandstone bluffs. Thanks to an influx of "back to the landers" in the late '70s and '80s, the number of small scale, organic farms increased exponentially, assisting the driftless area in hosting the highest number of organic farms per capita in the country.

Relatedly, the Driftless Region became home base for Organic Valley, the largest organic farmer-owned cooperative in the world. It has also become home to numerous enterprising food businesses including Wisco Pop and Kickapoo Coffee Roasters. 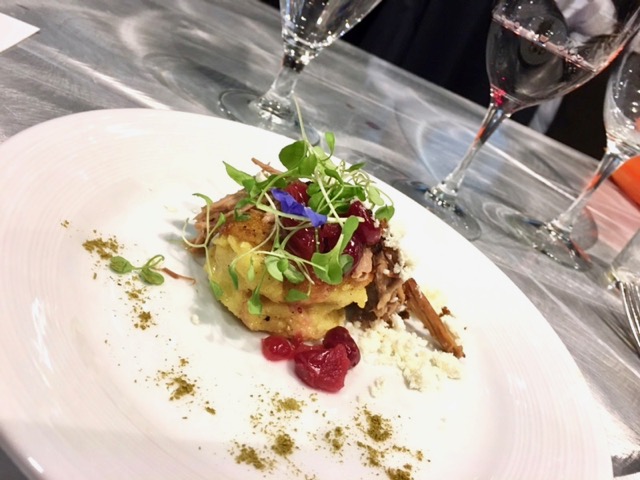 Zahm, who was born and raised in LaFarge, says he didn’t have a true appreciation for the rural community in which he grew up.

"My mom grew a lot of food, and she was part of the original team that started Organic Valley," he says. "But growing up, I felt pretty isolated. I took inspiration from guys like Butch Vig, who grew up here and went on to be the drummer for Garbage and producer of Nirvana’s 'Nevermind.' But I struggled with my own sense of the place."

Zahm found his passion for food while he was working his way through UW-Madison and working at area restaurants including Kennedy Manor and Lombardino’s, where he worked for Milwaukee native, Patrick O’Halloran, a chef he says changed his thinking in major ways.

"He is one of the most under-appreciated chefs in the entire state," says Zahm of O’Halloran. "He taught me to cook. He taught me the importance of supporting the local economy. And he taught me that I was more than a cook, that I had a responsibility to my diners as well."

Thank you to Andy Kelly from Epic and @jcarlisle22479 from @ardentmke for a successful collaboration dinner. And by successful we mean delicious. Until next time, friends.

Zahm also began spending time in the kitchen with other local chefs like Eric Rupert of L’Etoile and Milwaukee’s own Justin Carlisle who was chef at Muramoto in Madison at the time, and who Zahm says was "like cooking with a laser." He gleaned insights from his colleagues, particularly about local, regional fare.

"I remember one day Eric [Rupert] said to me: ‘You’re from the mecca of organic farming. Be true to that. Cook that food.’" And that message stuck. It began to make sense."

It made even more sense when Zahm began to recognize the true value of the food being grown in the area. In 2010, during a stint with Epic Systems software in Verona, where he recruited talent to cook at the company’s dining facilities, Zahm says he visited the American Bounty Restaurant at The Culinary Institute of America in Hyde Park, New York. When he opened the menu, he was surprised to see four ingredients listed as coming from the Driftless Region of Wisconsin.

"It hit me," he says. "That foods grown in my hometown were being recognized as some of the best in the world. And it was at that point I knew I had to go back home."

In 2013, Zahm and his wife, Ruthie, took over Viroqua’s Driftless Café, creating a small focused menu using locally grown organic products. He says the motto of the cafe, which is "Good energy equals good food," sums up his philosophy on cooking.

"That idea is behind every dish I create," he says. "There’s a noticeable difference in food that’s been created with soul, thought and intention. And this is food with a story behind it."

And when he thinks about his James Beard honors, Zahm says it’s not about him.

"It’s not about an individual," he says. "It’s about the whole shooting match, the whole state. It’s all about making this a better place to grow, to live, to eat and to farm."

Zahm will be paying a visit to Milwaukee on Sunday, June 4 for an installment of the Braise Restaurant Leaders in Local Food dinners. Tickets are $55 each. Wine pairings are an additional $15.

Or purchase tickets to the entire Leaders in Local Food Series for $150 or $195 with wine pairings. The series includes Sunday dinners with the Jennifer Blakeslee and Eric Patterson of The Cook’s House in Traverse City, Michigan (May 7); Chef Luke Zahm of Driftless Cafe (June 4); and Chef Dan Fox of Heritage Tavern in Madison, Wisconsin (July 16).