Made in Milwaukee: Harley-Davidson

Harley-Davidson motorcycles were born in Milwaukee and continue be conceptualized here, partially manufactured here and most of all, affect the culture of riders worldwide.

Made in Milwaukee is a new series about the businesses that sell to the world but call Milwaukee home. Presented by House of Harley-Davidson, Milwaukee's locally owned Harley dealer, we're shining a spotlight on these iconic companies – their histories and their futures.

At the turn of the 20th century, childhood friends William Harley and Arthur Davidson decided to motorize a bicycle mostly because they thought it would be fun to ride. They also knew that as residents of Milwaukee – an industrial city roaring with foundries and machine shops – they’d have easy access to the supplies and support needed to build a "motor-bicycle."

Little did they know at the time, but their version of this new transportation mode would not only revolutionize the vehicle industry, but also serve as a tremendous source of Milwaukee culture, pride and revenue for 114 years and counting.

Today, Milwaukee continues to serve as the home base for Harley-Davidson, with its corporate offices, Powertrains Operations facility, Product Development Center and Harley-Davidson Museum within the metro area.

Harleys are assembled in various plants in the United States – and some parts are manufactured all over the world. However, the "hearts" of most Harleys are locally made. 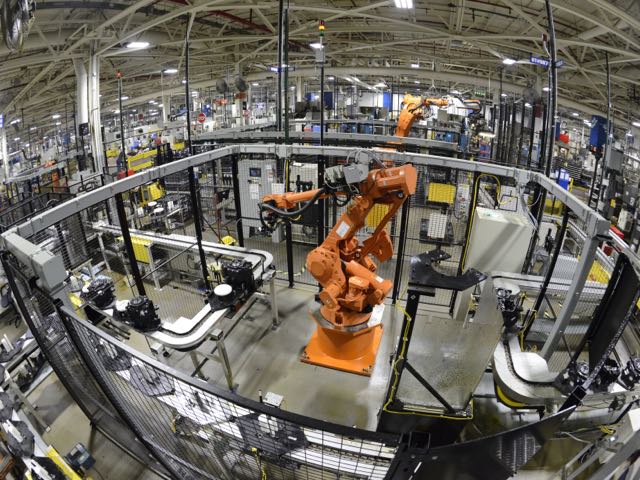 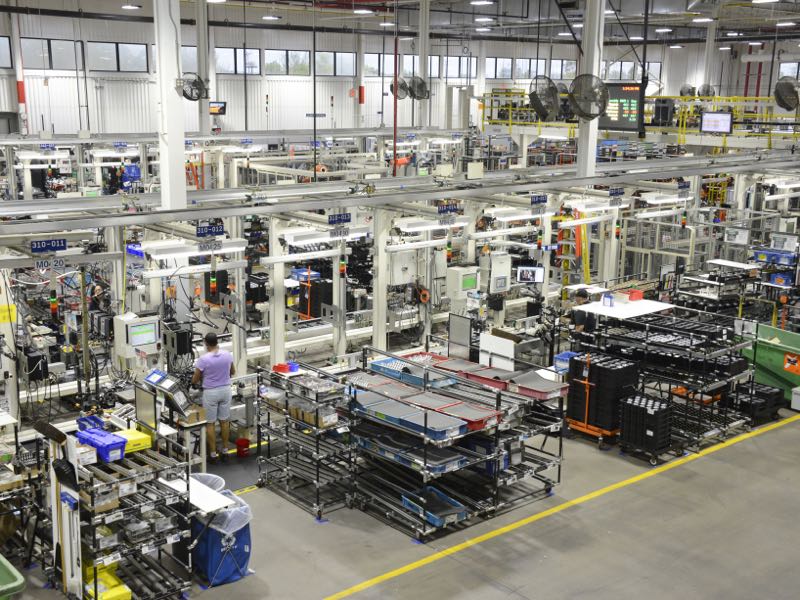 The Pilgrim Road facility in Menomonee Falls manufactures all of the powertrains – meaning the engines and the transmissions – built into Touring, Softail and Dyna models of Harley-Davidsons. The powertains are then sent to the final assembly plants in York, Pa. and Kansas City, Mo.

The importance of the engine goes beyond mechanics because they are also very visible and therefore an integral aspect of the bike’s aesthetic.

"The powertrains are a part of the artwork of the motorcycle. We call them the ‘heart of the engine’ and they’re made right here in Milwaukee," says Randy Christianson, General Manager of Powertrain Operations, Advanced Manufacturing and International Manufacturing.

The Pilgrim Road Powertrain Facility offers Steel Toe Tours which invite visitors to tour the plant and learn more about powertrain operations. Tours are currently on hiatus, but will return in September.

"Thousands of folks come to see what we’re doing every year because this is world-class, American manufacturing at its best," says Christianson. 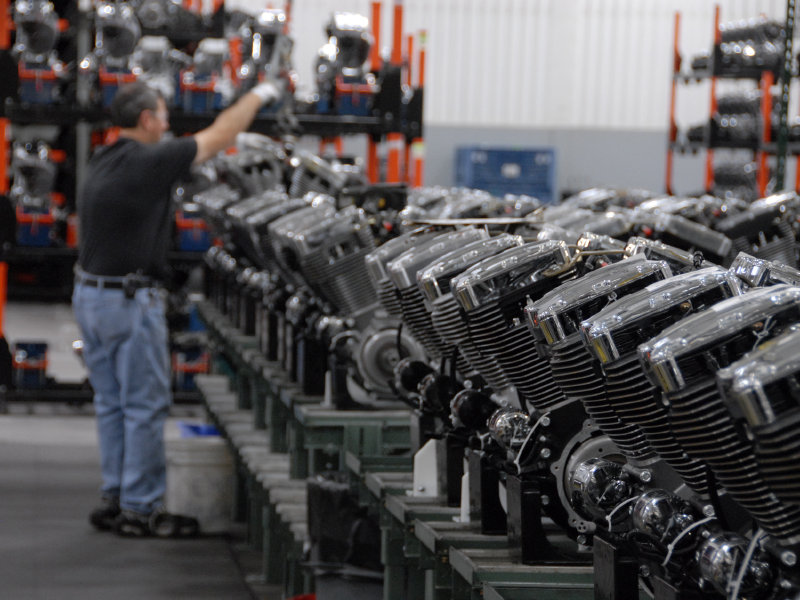 The "hearts" of Harley-Davidson motorcycles.

These products range from functional riding gear such as leather and textile jackets, helmets, gloves and rain gear to casual apparel and accessories designed for both riders and non-riders and worn primarily off the bike.

"The leather jacket is almost synonymous with Harley-Davidson because we’ve been designing and selling leather jackets since the ‘40s," says Lee. "However, some customers prefer non-leather riding jackets so we offer a range of abrasion-resistant textile jackets as well." 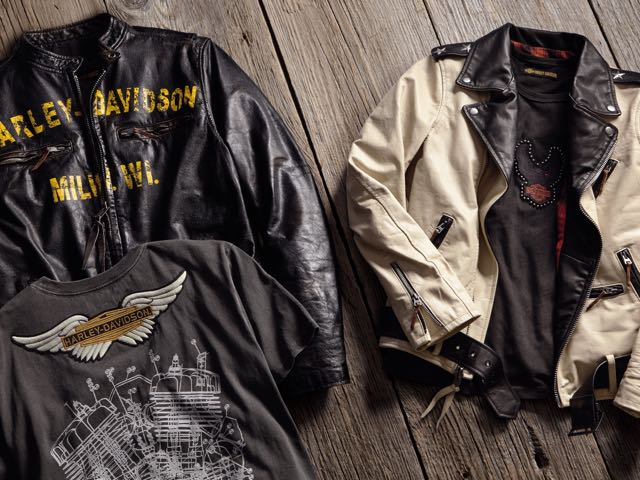 Multiple local companies contribute to the making of Harley-Davidson including the Milwaukee-based Milsco which has provided motorcycle seats since the early days of the company. Milsco’s "solo saddle" was continuously put on certain Harley models from 1925 until just a few years ago.

The Willie G. Davidson Product Development Center (PDC), a 370,000-square-foot facility in Wauwatosa, brings together the Original Equipment (OE) Engineering, Styling and Developmental Purchasing groups under one roof to improve the development process of every Harley-Davidson product.

"A lot of the real work is done here," says Jim Fricke, Curatorial Director of the Harley-Davidson Museum. "The PDC takes every concept from idea to reality." 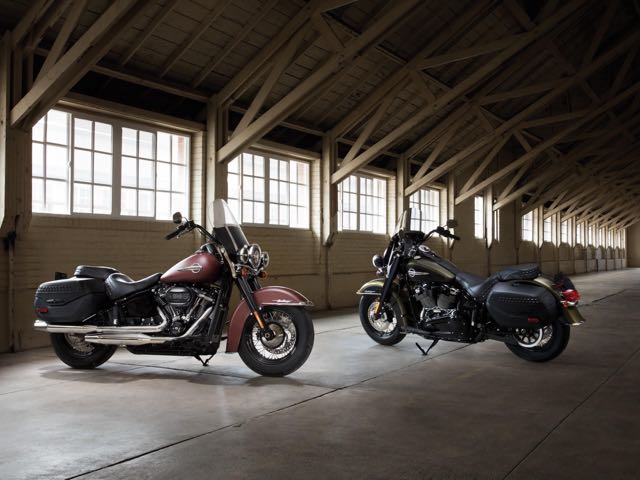 Harley-Davidson culture and appreciation are other aspects of the company that was originally "made in Milwaukee," but in a more abstract way than transmissions or designs for leather jackets. It even affects people who don’t own or ride motorcycles and the wide appeal is beneficial to many other Milwaukee businesses.

"Less than 20 percent of the museum’s visitors own a motorcycle. Whether they have thought about getting on a Harley-Davidson or not doesn't matter. It’s a famous brand that’s engaging to so many people for what it stands for," says Fricke. "There is so much mystique to our destination. Plus people come for the museum and then eat in Milwaukee restaurants and stay in Milwaukee hotels. It’s good for everyone."

There certainly isn't one type of Harley-Davidson rider, but many H-D enthusiasts ride for similar reasons – aside from basic transportation – including as a reward after hard work, for a slice of rebellion and, most importantly, for a sense of freedom.

These indirect results of Harley-Davidson are the true value of the experience, and they begin right here in Milwaukee.

Here's a video produced by Harley-Davidson about re-envisioning Softail motorcycles: