Was this opening weekend ACTUALLY boring? It's easy to say that after watching cute mid-major after cute mid-major crumble before your eyes, but compared to other seasons, were last weekend's first couple rounds a bummer? Let's look.

The NCAA basketball tournament may have started this weekend, but after four days of games upon games, only the March part of "March Madness" was accurate. The first round brought some close calls but rarely any actual upsets, and by the time the second round wrapped up, Cinderella had missed the ball.

Yes, South Carolina did the sporting world a favor and tripped up Grayson Allen and Duke late Sunday night, but while it's nice this is South Carolina's first Sweet 16 visit, are we really going to call an SEC school a Cinderella? And as much as we might love them, an under-seeded Wisconsin team that's made three previous Sweet 16 appearances in a row and sat in the Top 25 all season doesn't count either. Otherwise, you've got Michigan – a championship contender less than five years ago – and familiar tournament face Xavier.

Sure, there were some tight games, but they were all just teases, blue-balling the nation and disappointing tourney-lovers into busting out the dreaded B-word.

But was this opening weekend ACTUALLY boring? It's easy to say that in the emotion of the moment, after watching cute mid-major after cute mid-major crumble before your eyes, but compared to other seasons, were these first couple rounds really a bummer? Let's look (and dream of what might have been).

If you judge boredom by upsets, then 2017 does indeed qualify as a snooze of a start. Through two rounds of this year's March Madness, there were a total of 10 upsets based on seeding, which is tied with 2007 and 2015 for the fewest amount of surprises since the turn of the century.

However, in the case of 2015, two of those upsets involved 14-seeds: Georgia State, complete with its delightful head coach falling over, and UAB. Meanwhile, the lowest seed to move on in this year's tourney was 12-seed Middle Tennessee State – who was actually favored to win its spat with an over-ranked Minnesota squad in Milwaukee.

Plus, the 2015 tournament featured three overtime matches – as opposed to this year's, um, zero – as well as 13 games won by one possession, the most this side of the century. Compare that to just eight down-to-the-wire duels this opening weekend (and just seven if you nix the First Four). Basically, there may have been the same number of upsets two years ago, but the upsets were more fun, and the games were tighter and more competitive.

As for 2007 ... well, even by this year's standards, it was a bore. While this tournament has at least 11-seed Xavier in the Sweet 16, not a single double-digit seed made it that far a decade ago. Back then, the closest thing you had to a Cinderella was UNLV, a 7 seed. The lowest seed to make it out of the first round were two 11s – VCU and Winthrop – the first time a 12-seed or lower hadn't won a game since 2000. At least Middle Tennessee State gave us that this year.

Yes, there were four first weekend overtime games in 2007 too, but it resulted in the same amount of one-possession games, seven. So basically if you missed the 2007 NCAA tournament, all you missed was a bunch of March meh-ness. It stayed that way too; the elite eight featured all top-two seeds, save for Oregon, a 3-seed. How did we contain our excitement?!

So while this past first weekend of games certainly scores pretty low in terms of sweet surprises or legendary finishes, it wasn't the most boring start we've ever had (if we go all the way back to the beginning of the 64-team field in 1985, there were only nine upsets in 1991). It wasn't great, but then again, compared to recent years, how could it not be?

Last year, there were 16 opening-weekend surprises, with every seed number getting represented in the second round – except for a 16-seed, because obviously never a 16-seed. In 2011, one-fourth of the Sweet 16 was composed of double-digit seeds – and in the following three years, there would be at least 13 upsets and three low seeds going past the first weekend each time. And even all that can't compare to 1999, when there were 19 upsets in the first four days. Everyone's bracket died that year – and fast.

And while the results haven't looked exciting, the games over the past few days have had no shortage of thrills – from boneheaded Vanderbilt fouls to baffling ref mishaps ruining a young Northwestern fan's day and plenty of close, overall-entertaining games. Nothing happened to blow your mind, but nothing happened to make you blow off watching the tournament and, I don't know, go outside instead.

The lack of upsets so far hopefully means that these close, competitive games will continue through next weekend, as well. After all, we all remember George Mason's miracle run to the Final Four in 2006 (14 upsets) but we nicely forget the sadness of watching them get pummeled into the dirt by Florida.

We recall 15-seed FGCU dunking into the Sweet 16 in 2013, but not getting dunked out of the tourney by an obviously better ... huh, Florida again. And we were all delighted watching 11-seed Dayton shock the world by making the Elite 8 the following year, only to watch that delight turn to darkness when they got stomped by HOLY COW FLORIDA AGAIN!? Man, what is Florida's deal?

Anyways, more actual good teams in the Sweet 16 means more actually good games, rather than lopsided, 20-point beatdowns. And maybe the upsets will come more now. Maybe South Carolina or Xavier will keep its run going; Arizona, after all, did look mortal against a predictably scrappy Saint Mary's squad, and Baylor is ... Baylor. Maybe Butler, West Virginia or Purdue will send another top seed off to an early vacation with Villanova. Maybe Wisconsin will keep proving its abysmal ranking wrong with an upset win over ... Florida.

No matter what, the opening weekend of March Madness may have been low on the kind of craziness we expect, but it wasn't the worst. After all, it gave us this: 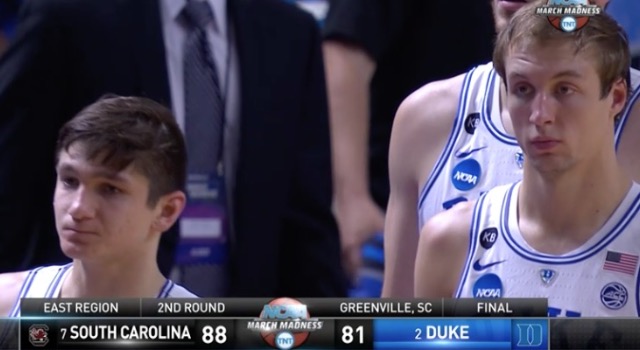