While some use pesky statistics like "wins" and "losses" to pick their champion, everyone knows the best way to win the office bracket pool is by knowing as little as possible. So here's the first round of March Madness, as chosen by mascot.

March Madness begins today, which also means nationwide gamblers, basketball addicts and co-workers are hurriedly putting together their brackets and picking who will get their "One Shining Moment" montage next month. And while some use pesky statistics like "wins" and "losses" to pick their champion, everyone knows the best way to win the office bracket pool is by knowing as little as possible.

Some go by uniforms. Some go by gut. Some throw darts, and others pick names out of a hat. We here, however, are going by mascot – whether that's just the team name or the actual student in a suit running around giving everyone high fives. Let's begin:

A wildcat would be a mighty concerning risk for a mountaineer to take on – even a mountaineer like Emmit S. Burg, Mount Saint Mary's mascot and 'roided out Larry the Cable Guy impersonator.

The badger would seem to be the obvious pick here, what with their menacing claws. But if you look at Bucky Badger, even in his grumpy 2-D drawn form, those claws have been filed down to nothing. Also, Bucky is actually short for Buckingham, which is a name you'd expect from the pompous villain in a '80s snobs vs. slobs college comedy, not a menacing opponent. Meanwhile, a Hokie is a glorified turkey, and there are a startlingly amount of videos on the Internet of people being intimidated by turkeys.

The fear in that woman's voice! SHE WILL BE THANKSGIVING DINNER THIS YEAR!

Cavaliers have swords. I'll take sword over bird – plus the Cavaliers have those big floppy hats to protect from aerial hawk attacks. That's what those hats are for, right? Why else would you put a feather on there other than to taunt your foe?

Much like a cavalier, the Buccaneers of East Tennessee State have swords. However, considering their mascot's skin tone, they also have that disease you get from eating too much silver dust - aka Argyria, aka Smurf's disease. That's going to be a problem - especially when facing something like this:

Once again, by the transitive property of swords, the Trojans and their mascot should defeat the Mustangs. Their non-cartoon mascot has even mastered a mustang and riding it into USC's football stadium.

Despite New Mexico State's attempt to make it look more like a sweet cowpoke, an Aggie – by definition – is a student at an agricultural school. Meanwhile, a bear is a freaking bear.

A bird battle at the bottom of the bracket. While Golden Eagles may never have the beloved history or sound as fierce as Warriors, at least it's not just Gold. Plus, it's still a regal, proud sounding mascot. On the other hand ... the Gamecocks.

Yes, the Trojans have swords, but what good is a sword against ACTUAL SATAN. OK, Satan Smurf – Duke is aware blue is generally considered a calming color, right?

South Dakota State may attempt to make a jackrabbit look fierce in its logo, but he kind of just looks like Bugs Bunny's cousin who also has jaundice.

I'm not sure what chance a delightful funk/soul band from the '70s has against a raging wildcat, but ... oh, Vanderbilt's mascot is actual a high-ranking Naval officer, not the singers of "Brick House"? Well, I still take the Wildcats.

Notre Dame may be fighting Irish, but a tiger is still a tiger. No matter your country of origin or how feisty you may be, tigers will ruin you.

Look at the West Virginia Mountaineer. Look at all those pelts. There's no way he didn't help usher the actual bison into almost extinction. 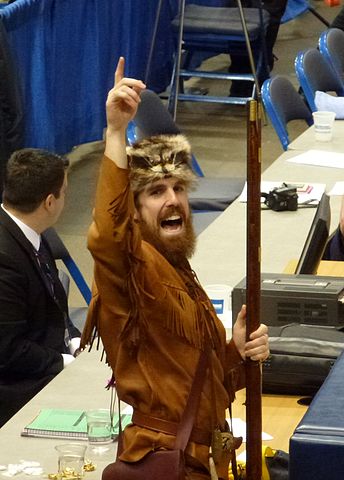 Terrapins may be adorable household pets generally speaking, but apparently their bite can hurt like hell – and even de-leg a duck. What an asshole! That being said, turtles are still as slow as ... well, turtles, and musketeers have guns (the word "musket" is right there in the name).

Fun fact: According to wise ol' Wikipedia, the Florida Seminoles are the only tribe in America to have never signed a peace treaty with the U.S. government. If they can stand up like that against a vicious, land-seizing monolith, I think they can handle a few birds.

Rams stand perilously on mountain ledges. They run into each other headfirst at full speed (have they not seen Will Smith's "Concussion!?). They've got sweet headgear. Rams are, in general, badasses. On the other hand, a gael is a storm that ... no? It's like a Gaelic person? So why does their mascot look like one of the freaking CG-reimagined Teenage Mutant Ninja Turtles? Do not like.

Wildcats are up against the Hawks, in the battle of the generic college mascot names. However, North Dakota's hawks are fighting hawks, while Arizona's wildcats are just standard issue wildcats. BORING! Should've gone with the Arizona Growling Wildcats or the Arizona Goring Wildcats.

An Aggie, once again, is an agricultural student, but the UC Davis logo tries to make its logo a mustang. CHEATING! You don't get to just change the definition of your mascot just because a logo with a dude riding a tractor doesn't strike fear into the heart of your enemies! Point goes to Kansas for committing to having a mascot and logo that looks like Toucan Sam.

Spartans were fierce fighters who were exceptionally good at fighting in slow motion, rousing fireside speeches and having awesome abs. Even their great moment of cinematic triumph, however, involved getting destroyed, and I imagine a phalanx would have a hard time standing up to an ungodly force of nature – no matter how much P90X they've done.

Once again, wolves are cool and get into fights with Liam Neeson, but a cyclone is an immense natural force – with an angry bird for a head! Gonna have to check Iowa State's grasp on science on that one, but still!

A catamount is basically just a pretentious word for a wildcat. That's nothing too special, but they're going against the Boilermakers, whose mascot looks like a suppository with the face of man who's just gotten a suppository.

As previously noted, rams are concussion-repellant gods. And while blue jays are beautiful and impressive creatures of the sky, Creighton loses points for its devastating lack of a space between "blue" and "jay."

Now that we actually know what a Gael is – aka a Gaelic person and not a windstorm – this matchup is a bit tighter. However, the edge goes to Iona because of its sweet logo. Look at that guy! Those crazy eyes! That perfectly chiseled jaw! A freaking axe! That guy defeats a duck and then eats it – RAW!

Wolverines fighting cowboys is a pretty mighty matchup. Wolverines have awesome claws and vicious teeth; cowboys have guns and somehow perfect stubble. It's a little less tight when it comes to dudes in suits, however. OK State's Pistol Pete looks like a deleted dead-eyed cowboy character from "The Polar Express," while Michigan's wolverine mascot was once an ACTUAL FREAKING WOLVERINE.

Yet another battle of the birds. Yet another team somehow named the Gamecocks. I'm not convinced this is not a frat prank gone wrong.

One of the possible origins for the term "Tar Heels" comes from a myth about soldiers threatening to stick tar on the heels of deserters. So UNC's sports teams are named after retreating cowards! I'll take the Tigers in that non-fight.

It's Arkansas, obviously! Right?! It's a pig with razors on its back! It's like a running knife, a chainsaw on four legs! (Note: the author knows nothing about nature).

Gophers would seem to be the obvious loser because gophers are more adorable than aggressive. But if it's a GOLDEN gopher, it should have an advantage with its metallic skin! Plus, these aren't just regular raiders; these are BLUE raiders. So they're showing up to this fight sad and pretty much already defeated.

Bulldogs and eagles? Not exactly a thrilling mascot battle here. But while I appreciate that the Winthrop eagle mascot looks like a character from an old racist Disney cartoon, Butler wins because it's mascot actually is a bulldog named Butler Blue. He's so adorable, all smiling and chewing on a bone on the sidelines. He's a winner. 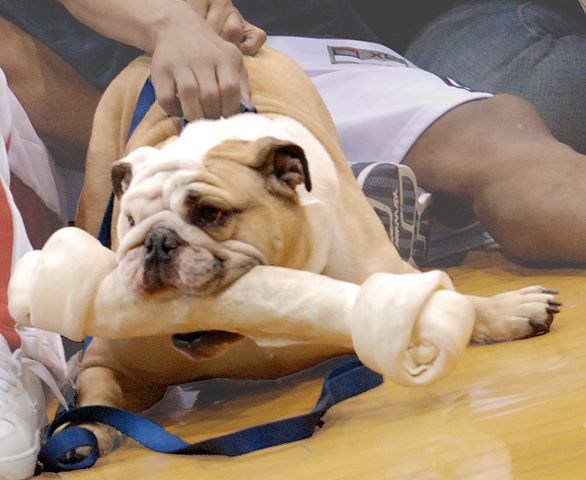 We've read Wildcats a lot here in the first round. But why settle for a wildcat when you can pick a BEARCAT! It's like a bear ... BUT ALSO A CAT! Try being the ligers next time, Kansas State.

"Golden Flashes" apparently means everything from a lightning bolt to a dog to a very nervous looking bird. I say they should've stuck with their original name, the Silver Foxes (this is true). Meanwhile, "bruin" is a more sophisticated word for bear, and as previously noted, a bear is a freaking bear. Bears beat beams of light – and even handsome grey-haired gentlemen – all day every day.

You have to choose the Shockers, right? I mean, they're just a bunch of extreme electricity! That's awesome! Hold on, why is their mascot just an angry bale of wheat in a sweater? Shockers refers to how students just used to harvest wheat to make money? Wichita State, how dare you taunt me with the prospect of a sweet mascot with lightning bolts shooting out of him?! Your mascot should be Saturday morning cartoon hero Static Shock.

I've had enough of wildcats. Meanwhile, the Norse is a completely unique team name, and its mascot looks like a delightful main character from an Nintendo 64 platforming game I completely forgot about until now.