On Monday afternoon, the City of Milwaukee Historic Preservation Commission took up the petition filed in January for the temporary historic designation of the Marcus Center for the Performing Arts, 929 N. Water St., in hopes of preserving grove of chestnut trees on the plaza between the center and Kilbourn Avenue.

On Monday afternoon, the City of Milwaukee Historic Preservation Commission took up the petition filed in January for the temporary historic designation of the Marcus Center for the Performing Arts, 929 N. Water St., in hopes of preserving, among other features, the grove of chestnut trees on the plaza between the center and Kilbourn Avenue.

The commission voted, without objection, to bestow that designation on the building and its grounds.

A master plan released late last year by the Marcus Center includes removing that oasis of shade and quiet that has existed since it was designed by renowned landscape architect Dan Kiley at the time the center was built as the Performing Arts Center in the late 1960s.

This rendering below shows the grove of 36 horse chestnut trees removed and replaced by 18 mature honey locust trees, in two parallel rows: 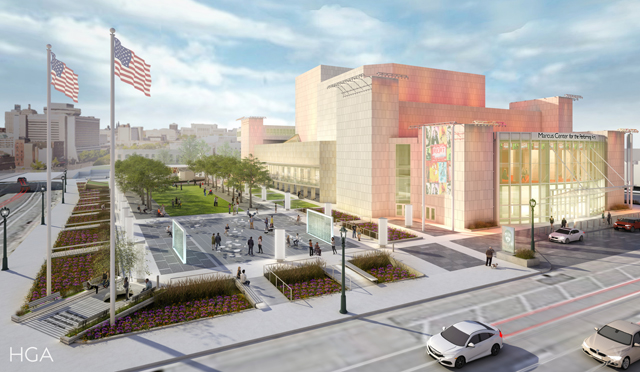 According to City Clerk Jim Owczarski, the building's owner can appeal the temporary designation – which lasts for 180 days unless otherwise stated – to Common Council.

Further hearings would be held if permanent designation is sought.

"Kiley was known for the keen architectonic sense he brought to many projects, which, in this case, was matched by the special interest that Weese took in the landscape," wrote Jennifer Current, ASLA, Landscape Architect and Mark Debrauske, AIA, architect, who filed the petition seeking temporary historic designation, in mid-January.

The petition was referred by the Common Council to the Historic Preservation Commission on Jan. 23.

"The dialogue between the two practitioners, each at the top of his respective profession, is evident in the seamless dialogue between the landscape and the architecture. The facades of Weese’s building were articulated in bold but simple planes of travertine. Kiley’s landscape was equally bold in form and simple in materiality."

The two continued, "The modernist agenda calls for good design available to all (egalitarianism) and honesty and simplicity in the use of materials. These important markers of Modernism are explicitly evident in the design of this Grove – concrete, gravel and trees. This is definitively simple materials used in elegant ways and accessible to the public.

"Kiley’s work on the Performing Arts Center is significant for many reasons. It is a masterful demonstration of the skill and vision that brought him international acclaim as a pioneer of Modernism in designed landscapes and as a recipient of the National Medal of Arts (1997), a rare achievement for a landscape architect."

As is typically the case, a study report was prepared after the petition was filed and that report recommends bestowing the designation on the property.

"The Marcus Center and the Kiley landscape stand out on their site in the heart of Milwaukee’s downtown," notes the report, prepared by Historic Preservation staff.

"They cannot be separated from one another since they were conceived together by their respective designers. The monumental, blocky Marcus Center does not resemble anything around it and is a destination building set apart on its own site and the landscape with its grove of horse chestnut trees serves as a welcoming spot to enjoy outdoor performances and provides the kind of amenity not found elsewhere downtown."

Architect Jim Shields, of HGA, who worked on the new master plan, testified to the many changes the building and grounds have undergone over the years and also pointed out that Kiley's name does not appear on an architectural drawing of the grove. It is unclear why his name is not there.

"I sat where you sat for 17 years," Shields told the commission, adding that he didn't see how the committee could give historic designation to a such an altered building and site.

"I think it is sufficiently intact ... that it still meets the qualification(s)," countered Ald. Robert Bauman, who introduced the motion to bestow temporary designation to the property.

"We are disappointed with the Commission’s decision to grant temporary historic designation to the Marcus Center," said Paul Mathews, president and CEO of the Marcus Center for the Performing Arts, in an email." The simple fact is that the Marcus Center is not a good fit for designation because the building and campus have undergone such vast alterations. In less than 50 years, the site has seen 11 major renovations implemented by six designers, including entirely new cladding on the entire building and a newly designed front entry facade.

"We respect the Commission’s work and look forward to the opportunity to present at a public hearing regarding permanent designation. We encourage the Commission to schedule the hearing as soon as is reasonable to help achieve certainty regarding how the Marcus Center will approach needed campus renovations.

"We are concerned that delay will create significant challenges as we embark on the critical campus improvements that are necessary to meet our mission to be a welcoming, open and accessible arts center, as well as to ensure our long-term financial sustainability."