After years of discussion about the future of the old McKinley Elementary School, 2001 W. Vliet St., which had been sold to a private operator by MPS nearly 40 years ago, Oregon, Wisconsin-based Gorman and Company announced in July that it had finally secured the required funding for a project in the building. Here's an update.

After years of discussion about the future of the old McKinley Elementary School, 2001 W. Vliet St., which had been sold to a private operator by MPS nearly 40 years ago, Oregon, Wisconsin-based Gorman and Company announced in July that it had finally secured the required funding for a project in the building.

In 2014, the building faced demolition after damage from a fire and then more issues created by vandalism and the ravages of weather and time. Three years later, the Gorman plan surfaced, but then faced funding challenges. You can read more about the plan here.

In the meantime, I declared the unique building a place that matters and managed to get a peek inside for these photos.

Today, I returned for another look, this time with Quorum Architects' Allyson Nemec, who is working on the project.

Gorman also partnered with Quorum for its conversion of the old 5th Street Street into senior living apartments a few years ago, so they have experience working together on this kind of project.

Before we go in, Nemec tells me that the Vliet Street edge of the vast schoolyard will get a quartet of traditional homes, which were desired by Ald. Robert Bauman.

Those homes will be loosely based on a beautiful 1890 house directly across from the former school's 21st Street entrance, at least in terms of massing. 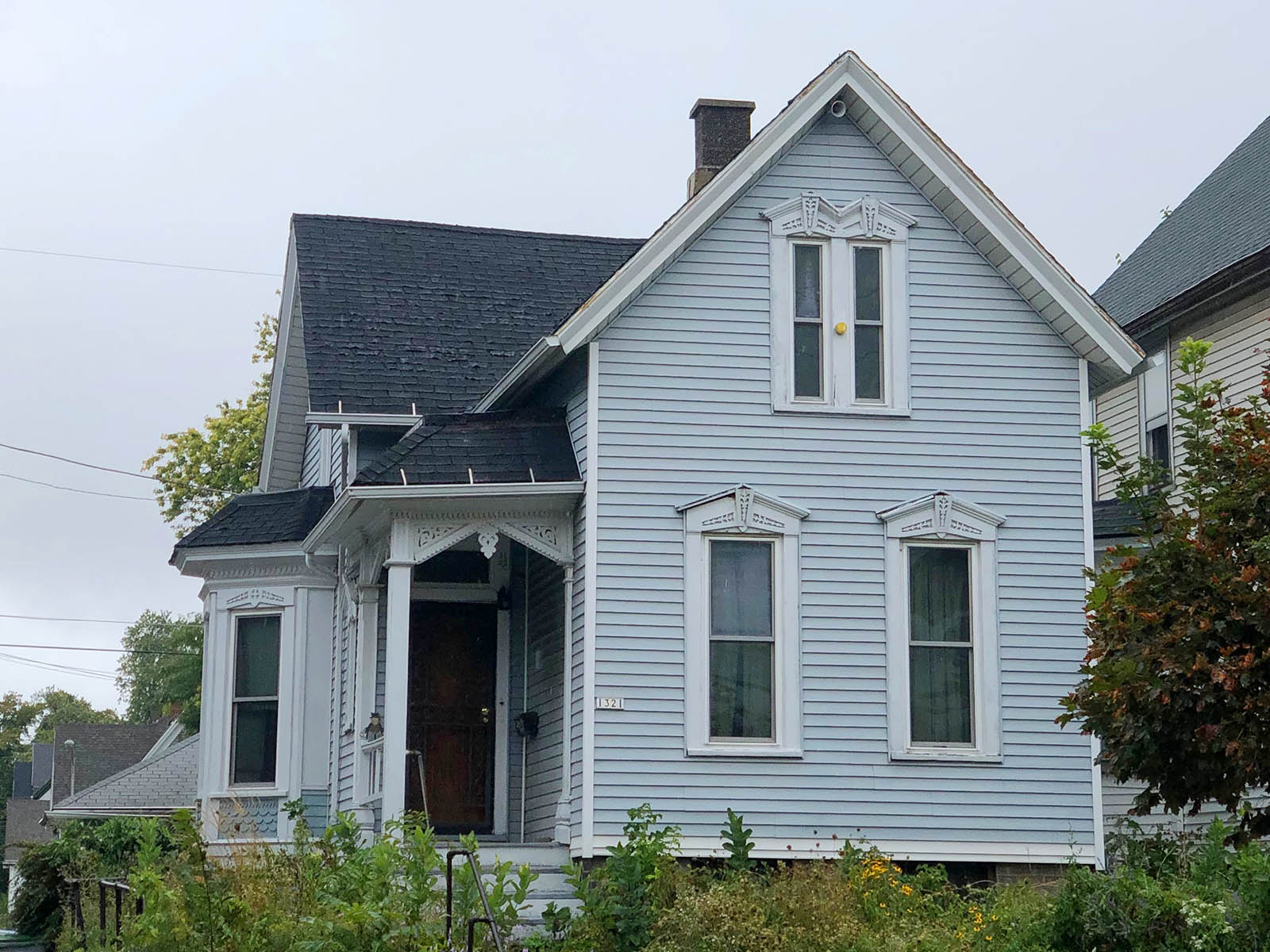 Inside the school, which was built in three large distinctive segments over the course of about 15 years, from 1885 to 1898 (plus a mid-20th century addition), there will be about 36 affordable housing units for veterans and their families.

"Pretty much each classroom represents a unit," says Nemec, who adds that the adjacent cloakrooms will be used for storage units and HVAC infrastructure for each apartment.

"Except in the basement where some that have no natural light will be used for things like fitness rooms."

The layout of each building is unique and despite the fact that the oldest two wings appear identical from outside, inside they are built on different plans. The eldest (facing 20th Street) has a corridor flanked with classrooms, while the first addition to the west has a large central area with classrooms arrayed around it, almost like a hospital pavilion.

The latest addition, facing 21st Street, is again a double-loaded corridor, and wraps around a light well that was created when it was constructed to ensure that the west-facing rooms in the middle building still got light.

That space will be restored as a light well.

The second floor gym will likely be a community room as is the case at the 5th Street School project.

There is a lot of work to be done both inside and outside to undo years of neglect and vandalism.

Every time a team arrives, there is fresh damage from tresspassers to attempt to undo.

For the remainder of this year, there is remediation and cleanup work to attend to and the building is expected to be handed over to Gorman in January. Nemec estimates the project will take about a year to complete from that point.

Here are some photos I took during today's visit. 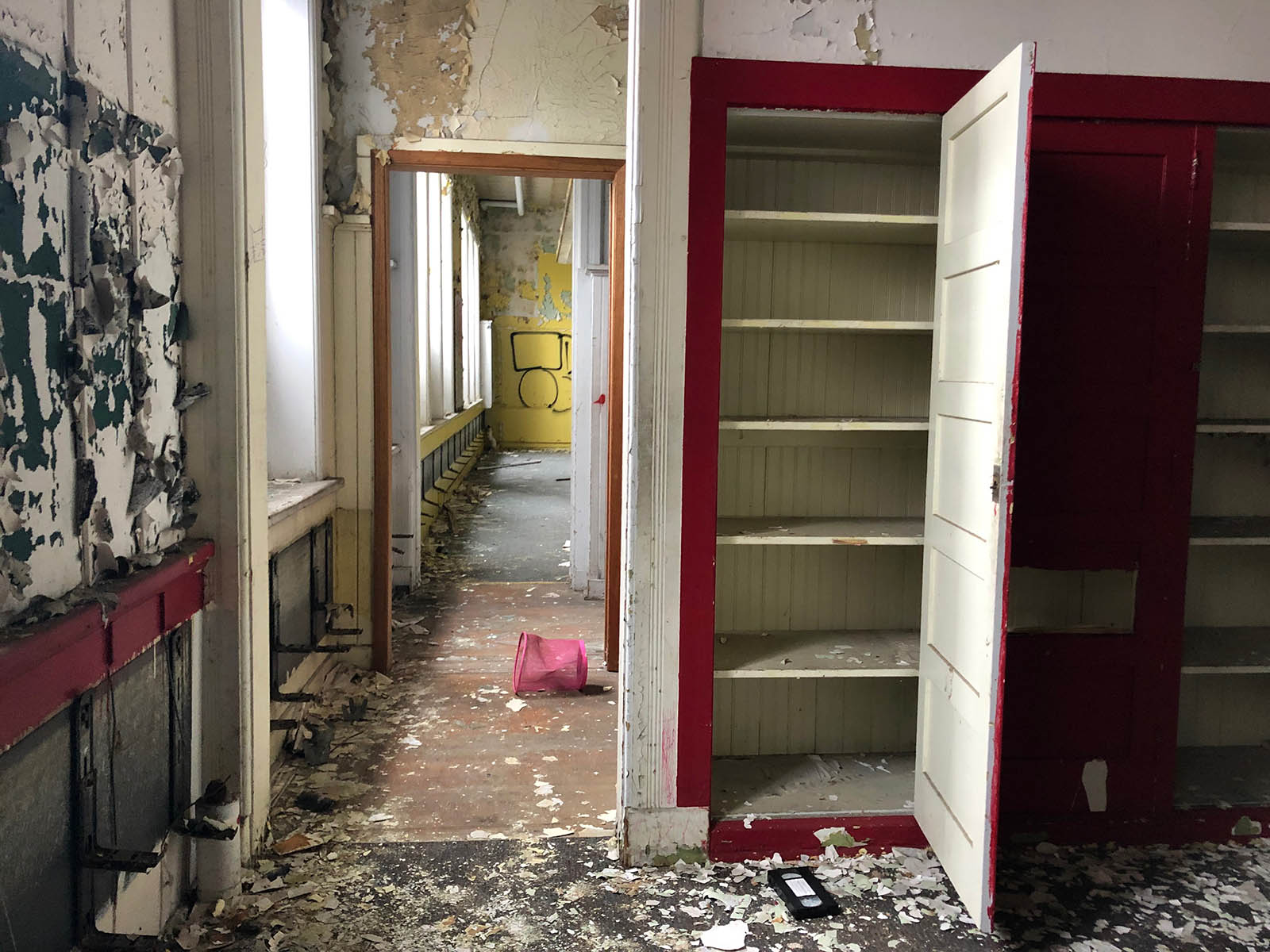 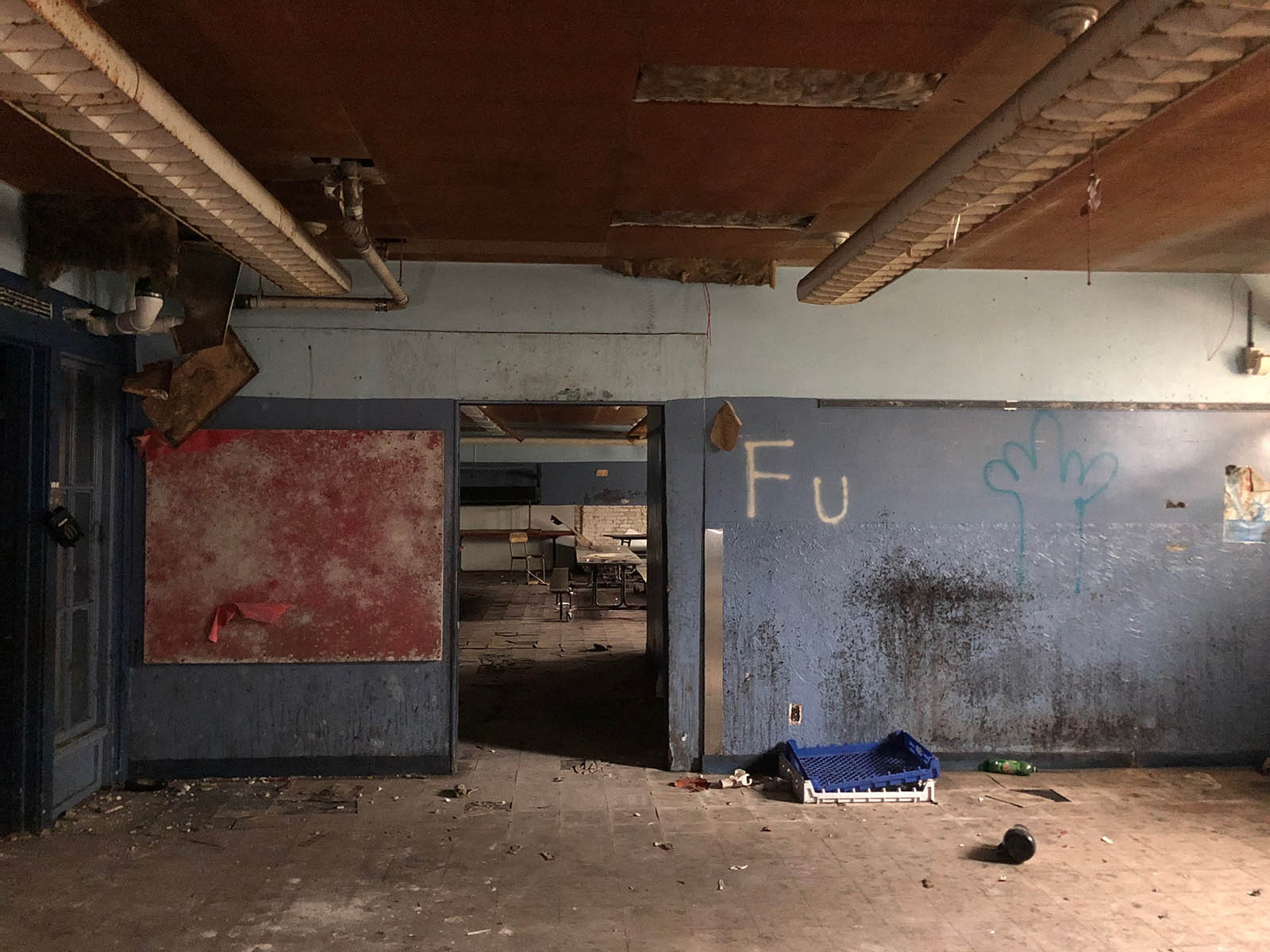 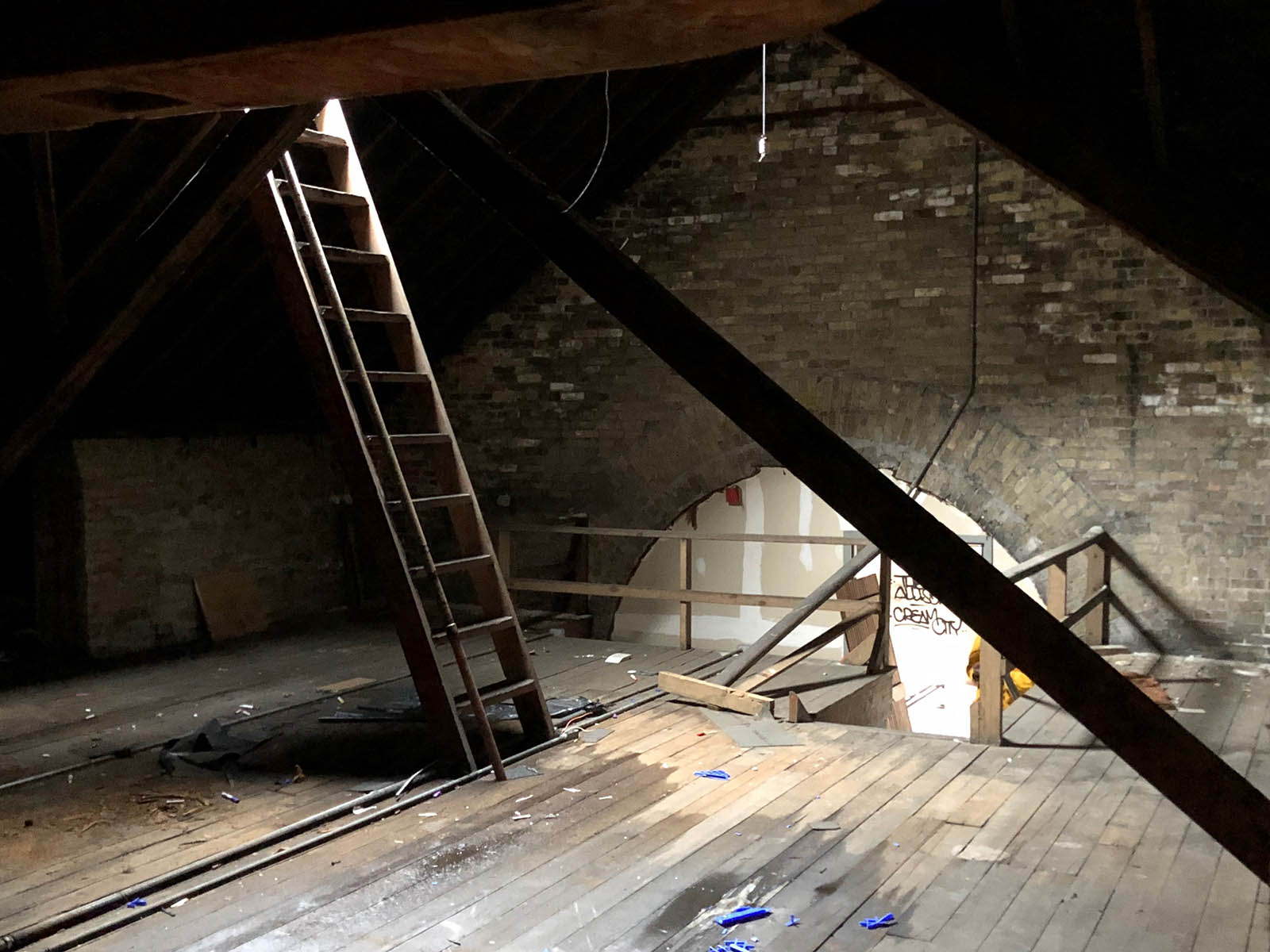 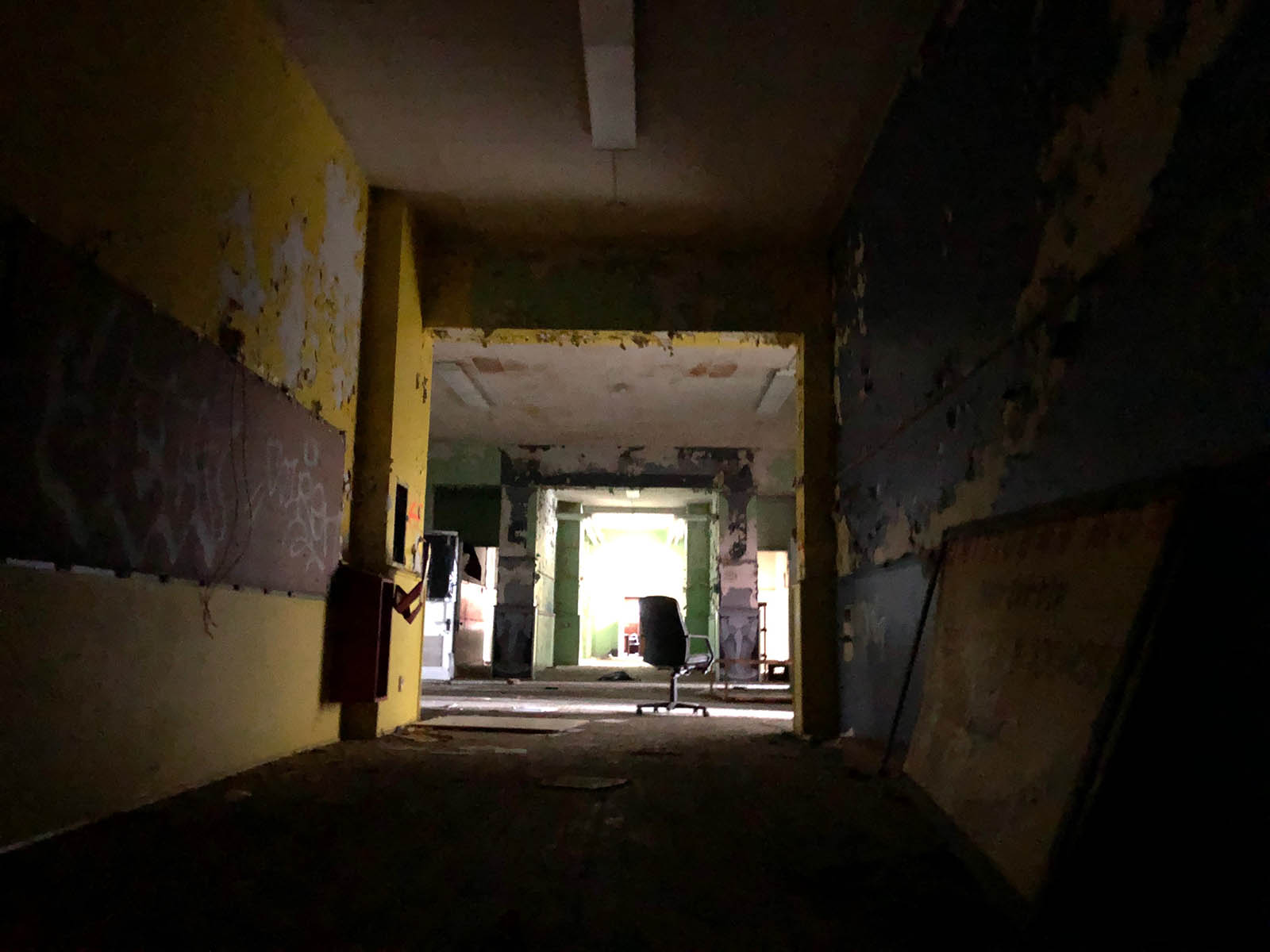 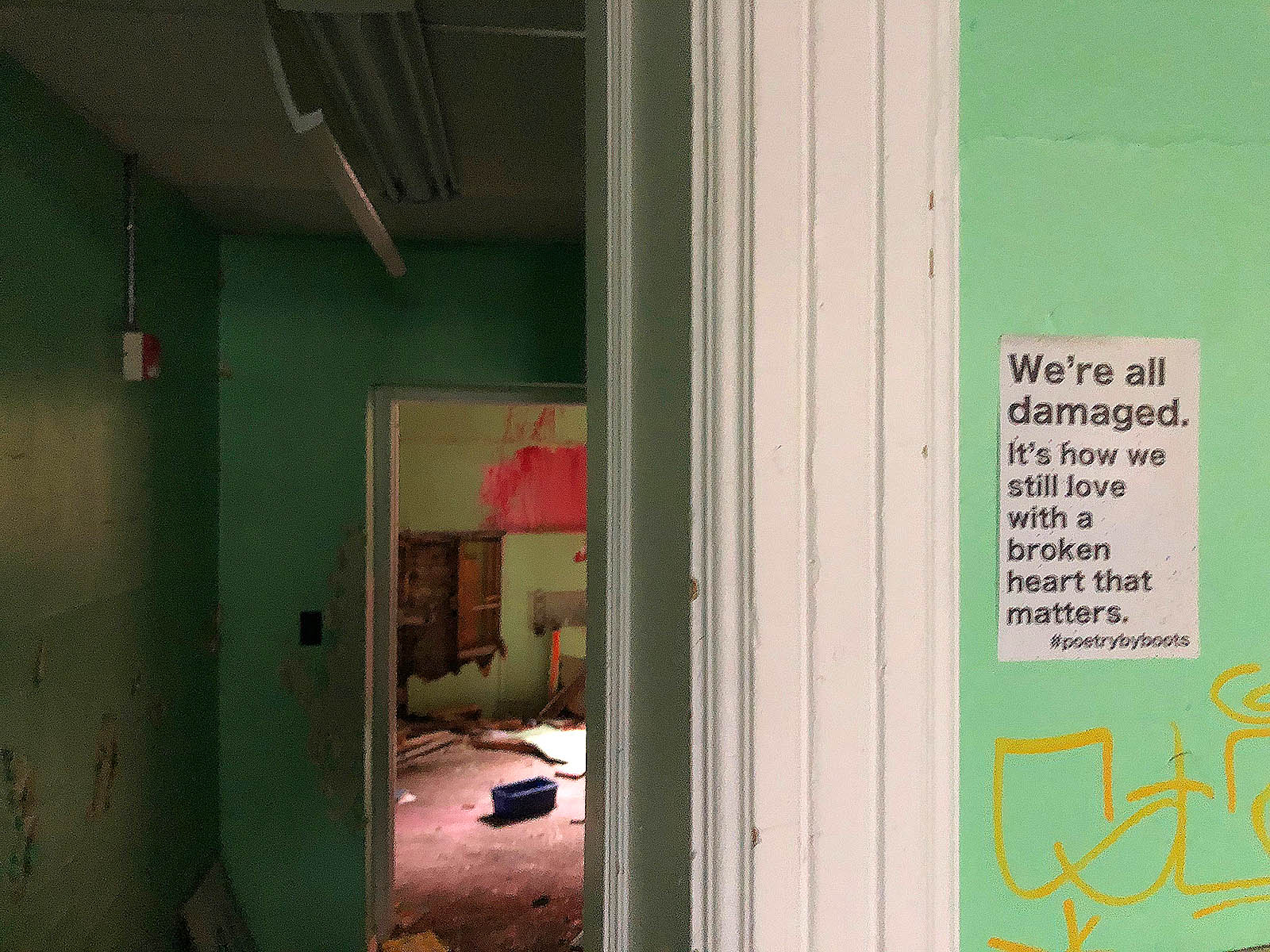 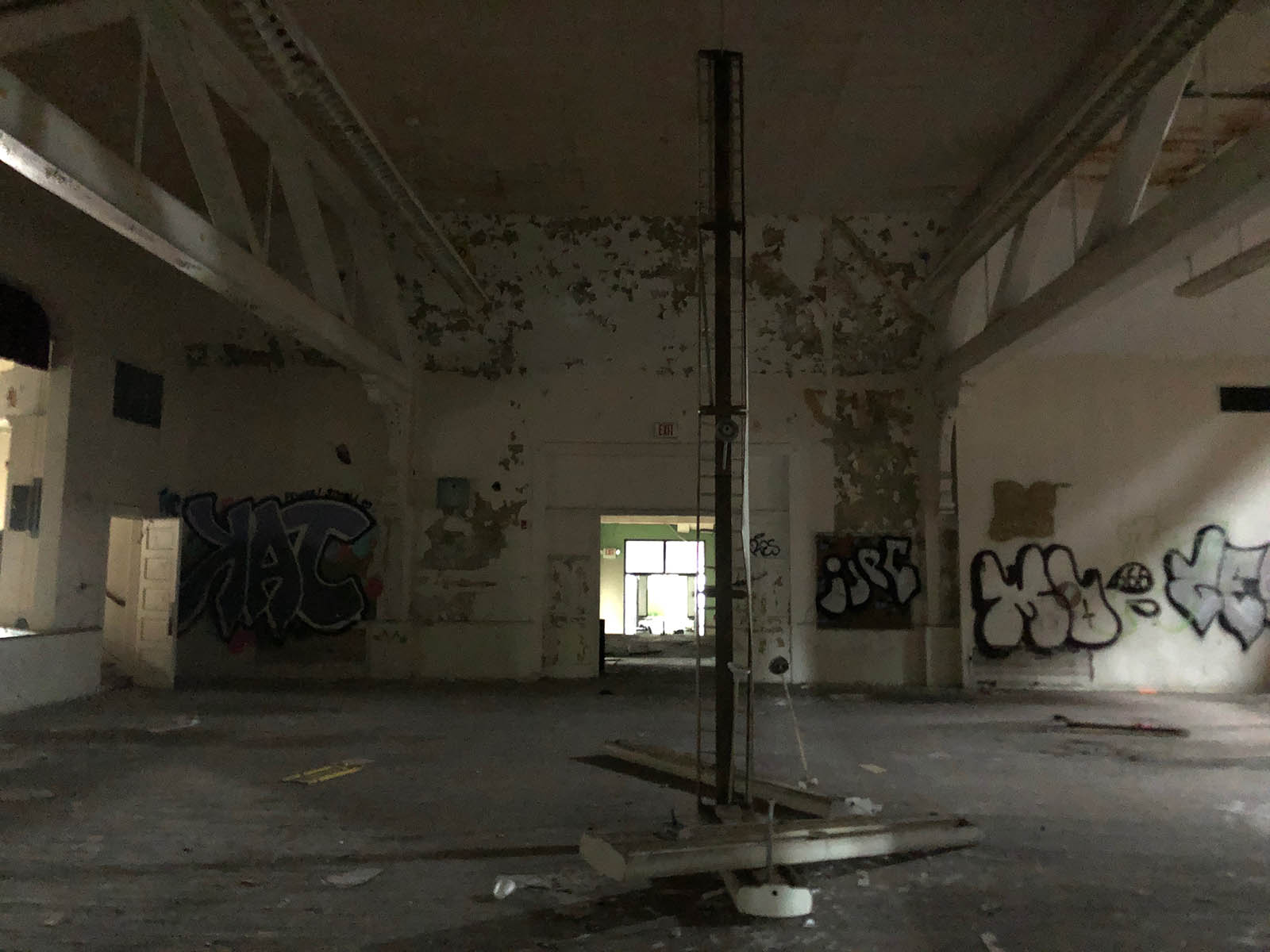 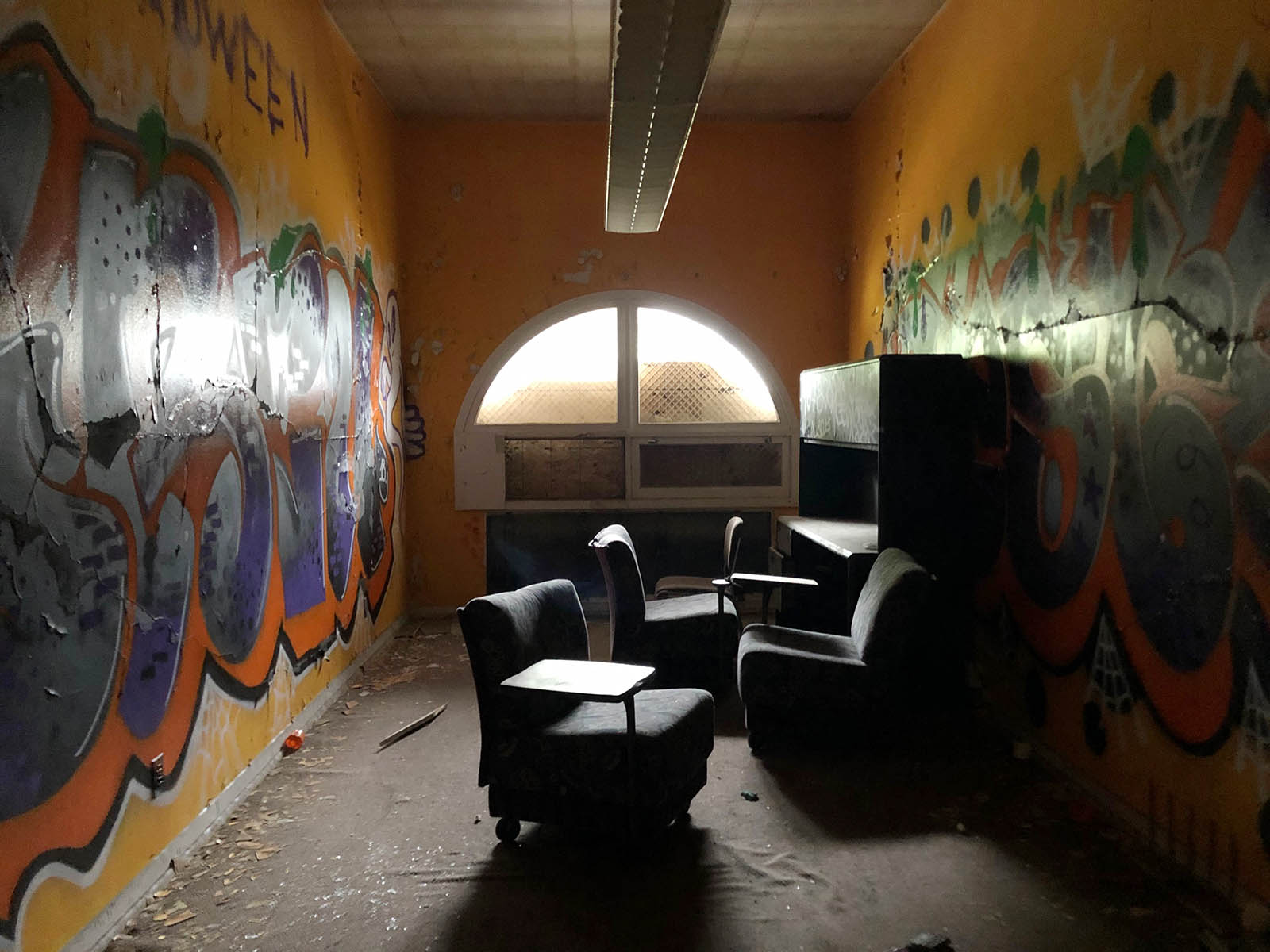 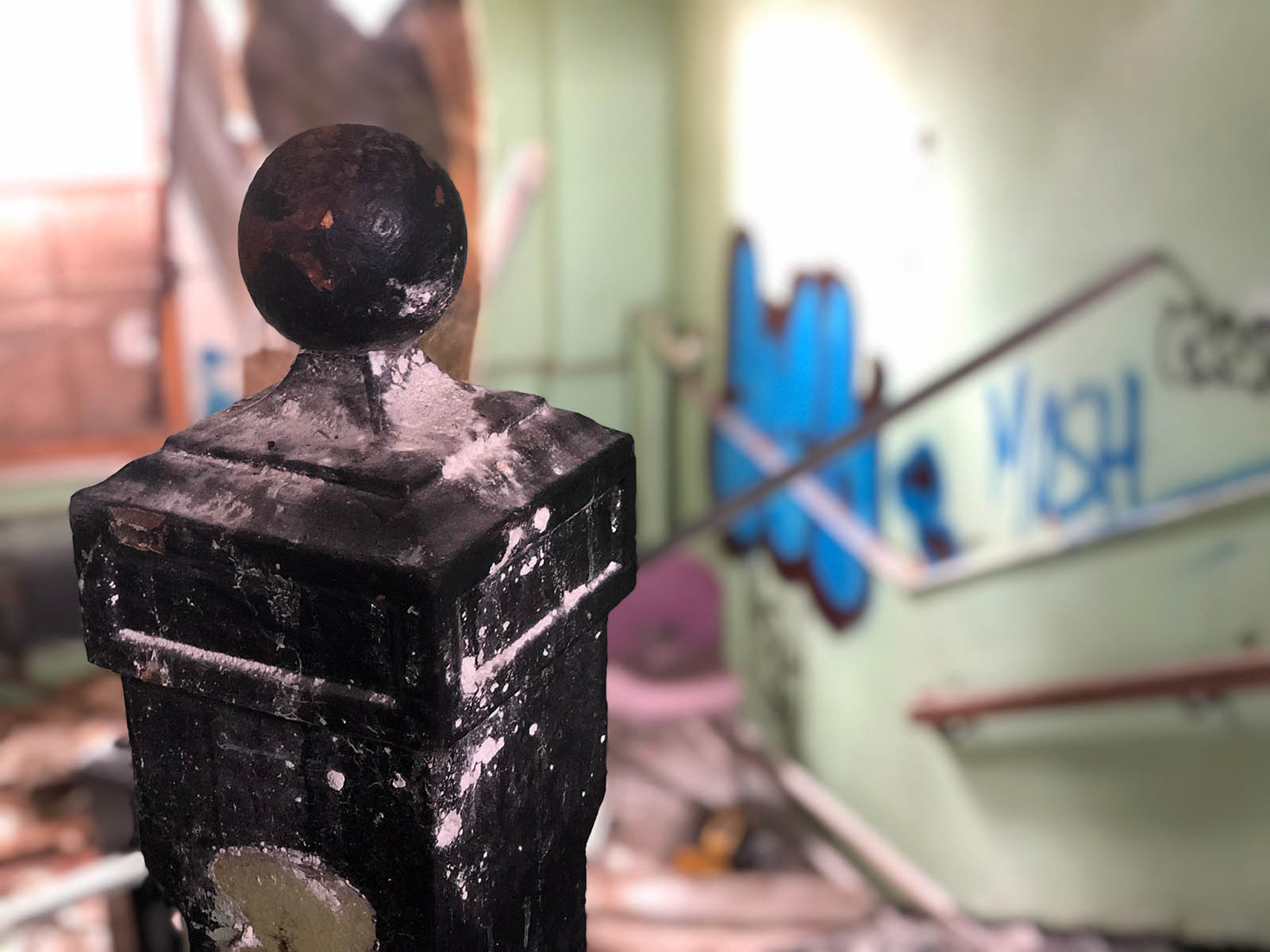 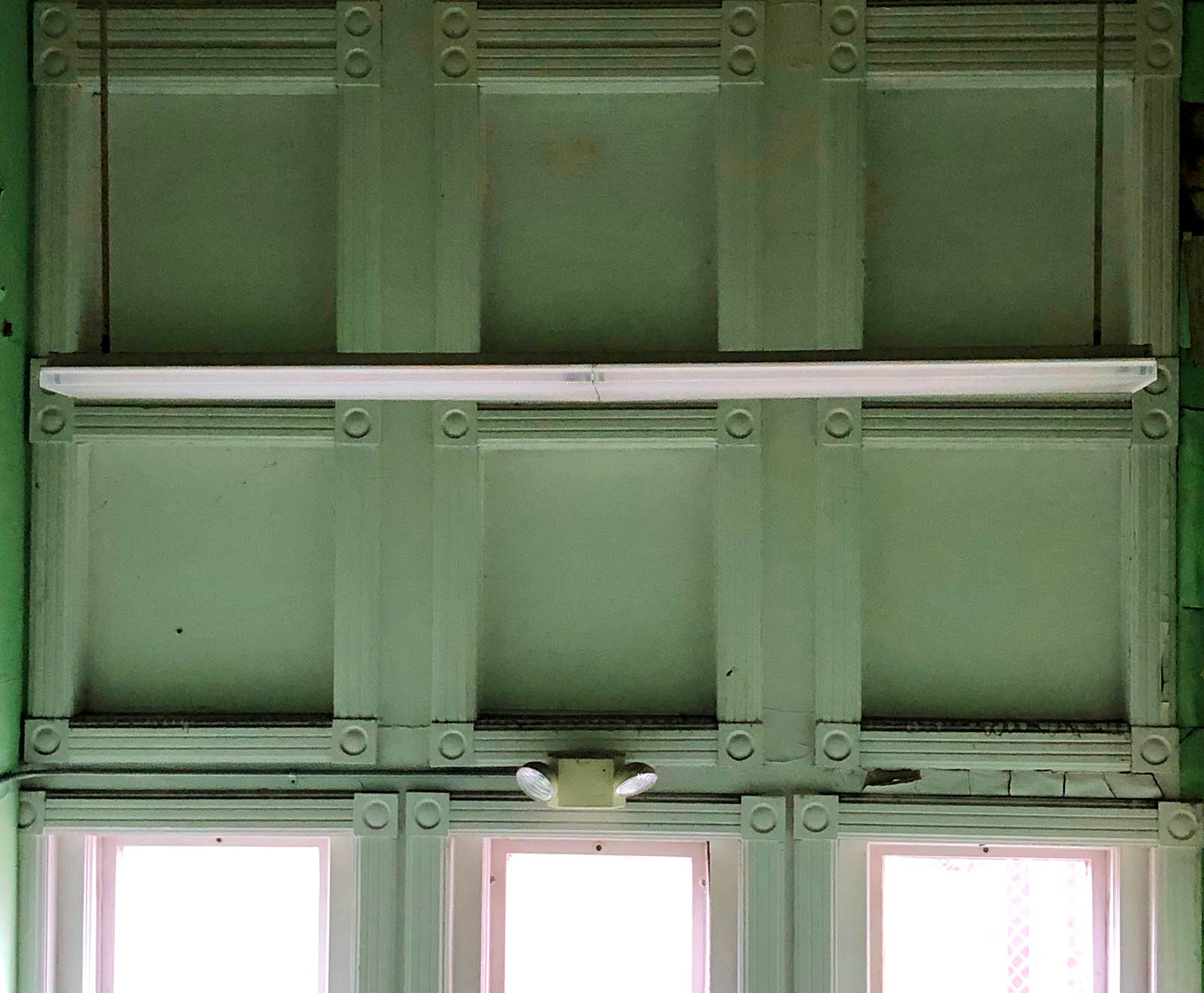 It's time to show up for 1700 Pull Up, slated to open in the former Tandem