The great American pastime would be nothing without its soundtrack - and for the past 14 years, organist Dean Rosko has contributed to its beloved orchestra, playing an integral part of the Miller Park experience.

The crack of the bat. The roar of the crowd. The vendors reminding you about Lemon Chill, get your Lemon Chill. The great American pastime would be nothing without its soundtrack – and for the past 15 years (ever since he was just 18 years old), organist Dean Rosko has contributed to its beloved orchestra, playing an integral part of the Miller Park experience.

As well as an integral part of the Oriental Theater experience. And the Gesu experience. And the Organ Piper Pizza experience. And, most recently, the UWM Panther Arena hockey experience. In other words, if it’s an iconic Milwaukee locale and there's an organ within spitting distance, Dean Rosko likely helped provide the score, juggling the massive display of keys, switches and pedals that could overwhelm even the most well-trained of NASA astronauts.

Rosko typically lets his fingers on the keys do the talking for him, but for this Milwaukee Talks, we got to chat with the man behind the music to learn about life at  the organ, the memories he’s seen, the notes he’s missed and the requests he’s received (no "Freebird").

OnMilwaukee: Where did your interest in playing the organ come from?

Dean Rosko: Well, I always played piano. We had my grandmother’s piano in the house growing up, and I just kind of always showed an interest in it. And I was able to pick things up at a fairly young age, so I started piano lessons and all of that sort of thing. Piano is sort of the usual path toward the organ. It’s best to start out that way: It develops good keyboard technique and things like that.

But I migrated toward the organ because of the variety of sound and the power – especially when you have a big pipe organ. It’s a thrilling sound, so I gravitated toward that aspect of it first, I guess. I guess that would be the first thing.

How hard was it to make the leap from piano to organ? Because you look at an organ, and it seems like there’s so many keys and options to keep track of.

There are a lot of options, and there’s a lot to keep track of. It’s part of what’s attractive about it for me.

But there’s also the aspect of what’s called registration and blending sounds and making all the different sounds work together in an effective way. And that’s a whole other art form that doesn’t exist on the piano. You have one sound, and that’s it.

Do you have a favorite organ trick or note or specialty?

Not in particular. The main thing is to try to be as straightforward as possible with whatever you’re playing – whether it’s a piece of classical music or a piece of popular music – and trying to make things come off in a convincing way. People have a tendency, in my experience, to put the organist into some kind of box, like Grandma Ethel’s living room or that sort of thing. But moving the instrument into a more accessible, more appealing avenue would be something I’ve devoted my life to. And I like to show off the instrument at its best, so whatever goes along with that is what I try to do.

How do you organize or plan what you’re going to play when at Miller Park?

I’m connected on the headset with the production team, so I work most closely with the audio producer, and we kind of determine who’s going to play what and when. If I have to coordinate a feature with something happening on the scoreboard – whether it’s a clap-along or a charge or something like that – we can do all of that.

But basically the real advantage – and the Brewers saw this back in 2003 when they hired me – is having a live musician and the ability of that live musician to play to whatever action is happening on the field, on the fly, in a way that’s more effective than you could really ever get with a recorded piece of music. And the Milwaukee Admirals saw that too in wanting to bring that feeling back to the arena when they moved back to the UWM Panther Arena.

There’s really nothing like being able to apply the trade on the real thing, and we’ve got the largest pipe organ in Wisconsin at Gesu. That having been said, playing for thousands of people at a time is also a different kind of thrilling. (laughs) At Miller Park, you’ve got tens of thousands of people in the building at one time; that’s a thrilling thing. I’m behind glass there, so it’s kind of different; at the Arena, I’m down in the middle of everything. Everything has its advantages; I don’t know if I could say one is my favorite. They’re all my favorites in different ways for different reasons. 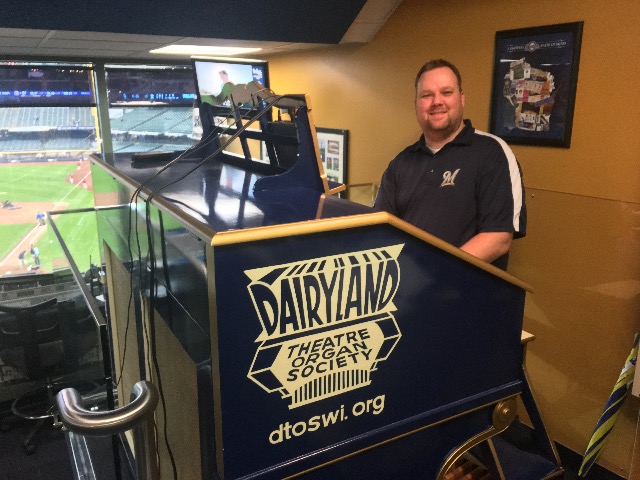 Dean sitting at the Allen organ at Miller Park – previously at the UWM Panther Arena courtesy of the Dairyland Theatre Organ Society.

How do you bring in new songs or retire songs at Miller Park?

Usually, rather than making an absolute statement, I would say, "OK, well, we’re going to lay off this one for a while," and maybe bring it back at some point. But I usually just try to determine what works well, what gets a good reaction from the crowd, what engages people. That’s how I sort of make that judgment.

People have tried to ask me over the years, "Why do you play this, this or that?" There’s no real rhyme or reason other than what gets people into it. That’s really the only reason. I try to play things people may recognize or things that are catchy; we try to keep it pretty upbeat in general (at Miller Park). At the Arena, I’ve found that, because hockey is a completely different atmosphere than baseball, I can play more in the traditional theater organ style, like the hockey crowd is accustomed to from the Chicago Stadium days.

Who is your all-time favorite Brewer?

My dad is a sign painter by trade, and we were in the sign shop when Robin Yount had his 3,000th hit. I remember that so vividly, I’d probably have to say that. That’s kind of a generic answer, I guess, but isn’t he everybody’s favorite? He’s gotta be, right! (laughs)

And your favorite musician outside of the organ?

I have a lot of respect for guys like Keith Emerson and Rick Wakeman. Their innovation at the keyboards are really just incredible, and you listen to the things they can do technically, Keith Emerson is just brilliant. Like, my god, can that guy play. (laughs) Again, it’s hard for me to pick out one because I got a piece of advice from an organist friend of mine early on in my career: Listen to everything you can possibly get your hands on. Pick out the things you like and the things you don’t like, try to incorporate some of the things you like and evolve and develop your own style from there. So that’s what I’ve always tried to do.

Do you at least have a favorite song that you never want to play again?

(Laughs) I don’t know if I should comment on that. People have tried to corner me on my favorite song over the years, too, and I don’t know if I can pick one. I hate to be noncommittal, give you a run-around, non-specific answer.

How about I just give you "Go Cubs Go"?

Well if I want to keep my job! (laughs) Contrary to the belief of many south of the border, we are not Wrigley Field North. I have never played "Go Cubs Go," and I never will.

Do you have a favorite memory, either from Miller Park or Gesu or anywhere?

The times we’ve made the playoffs – 2008 and 2011 – were unbelievably exciting. That amount of energy is just unbelievable. The electricity going through that building and being able to put my hands on the keyboards and make 50,000 clap is just something you can’t describe.

The same thing goes for performances at the Oriental. I’ve played at a couple of movie premieres there, where the place is just packed to the gills, and film festival shows where people are lined up outside the door. I’ve done quite a bit of playing for Milwaukee Film Festival crowds, and they’re absolutely wonderful. The energy that’s in a full house, no matter where it is – 1,400 people at Gesu coming together to sing a hymn led by the organ or if it’s a packed house at the Oriental waiting for a movie start or the Brewers clinching a Wild Card spot – it’s got that same kind of energy. It’s exhilarating, really.

Have you ever completely botched a song?

Yeah, it happens. We’re all human. Thankfully, the organ is kind of an instrument where there’s a lot going on, and you can cover things up relatively easily. (laughs)

There really isn’t one. The only secret is just to keep going. Just don’t stop; keep going.

Do you get any requests from anyone – players, announcers?

Bill Schroeder likes his ABBA. He really likes his "Dancing Queen." He’s made it a point of mentioning it on air several times, and he’s caught up with me a couple times at the Arena over the winter, and I’ve gotten the message there too: Play some ABBA. It’s really kind of cool.

The story of my life seems to be, "When in doubt, play a polka." It is Milwaukee, so we’ll go with that. (laughs)