Anyone who's worked with the Ulsbergers has positive things to say about the two who seem to have mastered the delicate balance between DIY punk ethos and professionalism. 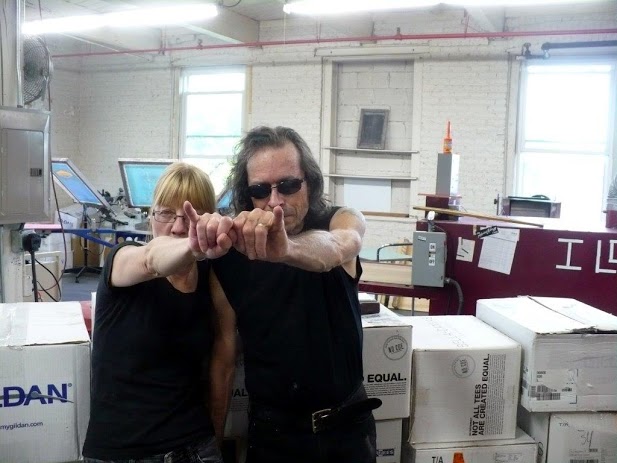 Cliff and Marie are partners in life as well as business. In 1992, they started printing shirts for their band, Wanda Chrome and the Leather Pharaohs, and today they own and operate a five-story building that houses their successful printing business, The Factory, and serves as studio and practice space for local artists and musicians.

Anyone who’s worked with the Ulsbergers has positive things to say about the two who seem to have mastered the delicate balance between DIY punk ethos and professionalism.

OnMilwaukee.com / Too Much Metal: How long have you been doing this?

Cliff: We started in 1992. At first we just did some shirts for our band and a shop that was on Brady Street called Tie Me Down. Then we started doing stuff for other bands and businesses like Fuel Café, Koppa’s, Too Much Metal, Beer City Skateboards … and it just kept going.

About ’93 we got into posters with John Hill and (Eric) Von Munz and also started doing stickers. At this time we were called Funhouse. Also at this time I met Dave Bammert. Dave owned a larger company called Colorcraft and basically became my guru, teaching me and letting me do larger projects at his shop.

About seven years ago Dave decided to retire and that I was the one to take over the business. I was being a bit apprehensive about it, but Dave had decided. So one day he just threw me the keys and said, "Here, you run it. I’m going to the bar."

We bought Colorcraft, assumed the lease, combined the two companies and became The Factory. Having a larger space and more equipment really increased our capability to do more, not only with T-shirts and stickers, but also larger format printing and industrial / specialty printing. Eventually, we ended up leasing the entire five-level building and began offering space for artists, craftsmen and rehearsal rooms for bands.

Marie: Living in Wisconsin where the winters are nine months long, who doesn’t love summer? But I also like autumn because of the smell in the air, the vibrant colors of trees and foliage and the "golden glow" of the sun compared to the sharpness of it in summer.

Cliff: Give me summer all the time!

Marie: Sadly, I don’t think Milwaukee has any smells anymore. I remember that smell of yeast hitting you in the face when you went down the expressway. I kinda miss that.

OMC / TMM: What is your hope for Milwaukee?

Marie: I would like to see more of a business / residential mix in neighborhoods. We’ve been to many major cities throughout Europe and that’s how it is there. There are tons of shops at street level with residential above or stand alone and you can get pretty much whatever you need right in your own neighborhood thereby cutting down on a need to drive / own a car. They also have better public transportation, again, cutting down on the need for a car.

OMC / TMM: What neighborhood do you live in?

Marie: I was born here, but when I was four, my mom packed us up and made me live in Green Bay (not a football fan, life was lonely). By the time I was 14, I was already planning my move back here. We had visited many times as I was growing up and I always knew I would come back. This city just always felt like home to me. Good thing too because about a year after I moved back, I met the love of my life and now business partner as well.

Marie: To see what comes next.

Cliff: It’s not always easy, but it’s never boring. People are always coming up with impossible projects and then we figure out how to do them.

Marie: Art. I’m a fairly low-maintenance kind of person. I’d rather buy some cool piece of art, glass, pottery, etc. than say, a designer purse or pair of shoes that will be passé in six months. I like to create a warm environment for us and for our guests so that they can come in, make themselves at home and enjoy the surroundings.

Cliff: A beer, a smoke and rock and roll all at the same time.

OMC / TMM: Name a Milwaukeean you would like to high five?

Marie: That would be Victor Barnett from The Running Rebels. Victor is the Running Rebels. We started doing business with them close to 20 years ago when it was actually Victor himself that would come over and talk about T-shirt orders. Now they have all kinds of various sports and music programs, classes, mentoring, etc. It has really been a pleasure to watch them grow and expand and to see the success stories of all the young men and women that benefited from the fact that Victor and his team weren’t going to give up on them.

Cliff: Tom Crawford and everyone at WMSE 91.7 FM. "The big sound from Downtown" is the last bastion of real free radio we have. DJs are free to play whatever they want and they’re actually live when you're listening to them. You can even call them on the phone and request a song. Try that with any other station. Also, they really go above and beyond to promote and support the local music scene including broadcasting bands live from their studio.