Angela Damiani is the president of Newaukee, an organization once known as a young professionals group that rebranded itself in 2014 as a "social architecture firm." OnMilwaukee.com recently chatted with Damiani about her role in the organization, her vision for the future and got a peak at her life beyond Newaukee which recently included a wedding.

Angela Damiani is the president of Newaukee, an organization once known as a young professionals group that rebranded itself in 2014 as a "social architecture firm."

Newaukee was founded in 2009 by Ian Abston, who also worked at OnMilwaukee.com in the sales and marketing department. The group started with biweekly meet ups called Socials and later expanded to include arts (specifically public art), culture, sports, festivals, networking opportunities and public policy.

Today, Newaukee has more than 200,000 members which keeps Damiani and the rest of the Newaukee staff challenged and inspired.

OnMilwaukee.com recently chatted with Damiani about her role in the organization, her vision for the future and got a peak at her life beyond Newaukee which recently included a wedding.

OnMilwaukee.com: Where were you born and raised and go to college? Where have you lived as an adult other than Milwaukee?

Angela Damiani: I was born in Cambridge, Mass., raised in San Francisco and attended university in the Twin Cities (Minnesota). Following college, I worked in Florence, Italy, and Athens, Greece, before settling in good, old Milwaukee. My family is originally from here and, after bouncing around for several years, I wanted to be near them.

OMC: What were you doing in Italy and Greece?

AD: I taught English in Italy and worked for the International Press Service as a journalist in Greece.

OMC: How / when did you get involved with NEWaukee? When did you become president?

AD: Shortly after my arrival in Milwaukee, someone suggested I attend a Newaukee event to get to know the city and some new people. At that time, Newaukee was a passion project of my business partner Ian Abston, but it was something I was instantly drawn to.

I began to volunteer with the troop of folks organizing the events. The energy around the programs and the increasing number of engaged subscribers consumed all of us. Before long, it was evident that we needed to either quit working on Newaukee from underneath our desks at work – or quit our jobs and do Newaukee full-time. We chose the latter.

I became president in early 2014 as we closed the brand ART Milwaukee and launched Newaukee's new look and mission: to provide a collision of all Milwaukee has to offer.

OMC: What duties do you have as president? Is this a full time job for you?

AD: We’re still a small team with seven employees, so everyone wears multiple hats. I am in charge of our finances, business operations and our communications.

Yes, this is more than a full-time job for all of our employees. Even as we enter our sixth year there remains a start-up mentality of working all hours of the day, every day of the week. But we love what we do, so there is little distinction between where the work ends and the fun begins.

OMC: How many members does Newaukee have and what is the member demographic?

AD: We have just crossed over the 201K subscriber base! We host 187 programs annually, so people are meeting almost every other day! (The Newaukee membership demographic is broken down below the interview.)

OMC: How would you describe Newaukee?

The Newaukee Method for developing community-based projects centers in the realm of what is known as creative placemaking. Through unexpected, fun experiences, this framework speaks directly to the psyche of young professionals and helps to differentiate economic development initiatives through active civic engagement.

Newaukee is recognized as the leading civic-based organization in metropolitan Milwaukee to engage the area’s young professional demographic and actively engage this significant component of our urban population in key issues of interest within the community.

OMC: What are your goals for the group in the next year?

AD: 2015 is the year of expansion for Newaukee. We have expanded our program offering to include a new speaker series called The Spotlight, a work-out series called Rise & Grind and in-depth neighborhood tours called Detours.

Additionally, we're expanding some of our signature events like YPWeek, Milwaukee Music Tour (formerly Eastside Music Tour, which will now be in three distinct neighborhoods) and Urban Island Beach Party.

AD: Yes! It will run from June to September this year along Wisconsin Avenue.

OMC: Is Milwaukee a good city for young professionals? What does it have to offer that other cities don't have? What is the number one reason why young people move away?

AD: Milwaukee is a good city for a lot of people. The city offers a lot of things other places have, but I find the accessibility to leadership both public and private a key differentiator. Due to the size and culture of the people here, it's not hard to make an impact, if you choose to participate.

There are many reasons people move away, but on a cold January day it's hard not to notice the weather. This is an intolerable climate and not everyone can – or wants to – hack it.

OMC: Anything at this point about the Northwestern Mutual / O'Donnell Park decision?

AD: We think it's a pity that the Milwaukee County Board was unable to take advantage of a once-in-a-lifetime opportunity presented by Northwestern Mutual. We also hope that the newest resolution proposed by the county supervisors to rehab the community asset is realized.

OMC: A couple of more personal questions … What do you like to do in your free time?

AD: Despite the very public nature of my job, I'm an introvert. So I spend a lot of my downtime cooking, writing, reading and walking – and eating – my way through neighborhoods.

OMC: You recently got married. Did you change your name?

OMC: How was the wedding?

AD: The wedding was utter perfection. We hosted a small family-only ceremony and dinner. Each guest was asked to bring a story to share about one of us or of what they have learned of life and love. Everyone sat around one table glowing with candles and told a unique tale: some funny, some sweet and some tender. We're taking a "Year of Honeymoons"! A trip every couple of weeks to stretch out the celebration and to visit friends who were not able to join us for the wedding. 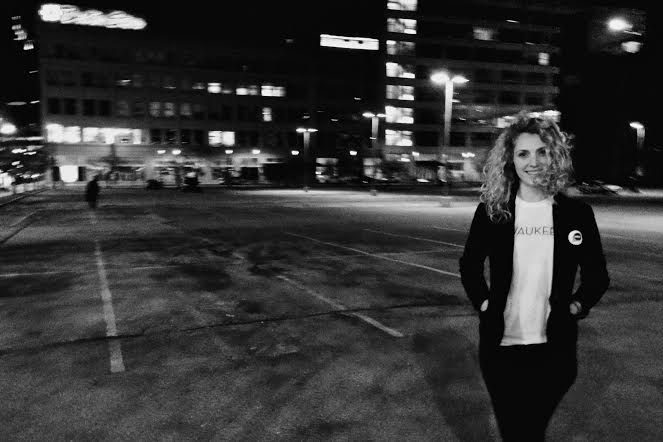 The general breakdown of Newaukee membership is as follows: