In 1951, Mary Jane "MJ" Riffel was a divorced single mother. Despite numerous challenges from sexism to cancer, she went on to a successful career in real estate and opened two real estate schools in Milwaukee. Today, Riffel is 92, lives on the shore of Lake Michigan in Bay View and is writing a collection of short stories.

Ninety-two years ago, Mary Jane Riffel was born in Milwaukee.

She was raised in the Third Ward by Italian parents – her father, who was from Palermo, and her mother also grew up in the Third Ward. The family resided on Marshall Street and Riffel, who graduated from Lincoln High School, continued to live there until she was 20 years old and married her high school sweetheart.

Soon after getting married in the early 1940s, the couple moved to Austin, Texas, while her husband was stationed at Bergstrom Air Force Base.

"We landed in Texas with no money except what we received as wedding gifts," says Riffel.

When Riffel’s husband was transferred overseas – World War II was going on at the time – she moved back to Wisconsin to live with her parents who had relocated to Frederick Avenue on Milwaukee’s East Side.

She lived in her parents' house there for two years and during that time, like many women during the war, worked in a factory. One day, shortly after she took an IQ test at work, her boss asked her to report to his office over the loud speaker.

"Everyone thought I was getting fired," say Riffel.

Instead, the boss told her she had scored very high on the test and that she was going to be transferred to a more challenging position.

"He gave me a timekeeper’s job but you know what? It paid less than my factory job," says Riffel.

Despite the cut in pay, Riffel earned something far greater during this period of her life. She recognized her intelligence and the inequalities in the workplace for women. Both of these realizations would take her far in the future.

Around 1945, Riffel’s husband returned from the war, and the couple bought a duplex on Cramer Street for $8,900. However, she quickly realized he was not the same person.

"I didn’t know my husband anymore," says Riffel. ""Before he left for the war, there wasn’t any drinking or smoking, but now I had a husband who was coming home in the middle of the night."

Riffel thought about divorcing him at the time, but then she got pregnant and delivered a son, Ricky, in 1948. Meanwhile, her husband continued to struggle.

Riffel says her Catholic family begged her not to end her marriage. Her mother told her that he would eventually return to his old self, but Riffel knew that wasn’t true. She filed for divorce in 1951.

"I became a disgrace to my family," she says.

However, Riffel's parents eventually came around – in part because they were crazy in love with their grandson – and helped Riffel get on her feet. She remained in the Cramer Street duplex for a while and typed envelopes for businesses while the baby napped and put a sign in her yard advertising her alteration skills.

"I was quite a good sewer. You could come to me with a skirt and I’d hem it for a dollar," she says. "Doing these odd jobs allowed me to be with my son morning, noon and night. And my mother helped a lot then. I know she’s looking down on me right now, wanting credit, and she deserves it."

Riffel attended and graduated with secretarial skills from the now-defunct Business Institute on North Water Street. She then took a job in Butler for $65 a week.

"I had this brainy idea from the movies that I was going to be one of those well-dressed secretaries, but I was bored sick," she says.

Riffel considered selling her duplex and invited a real estate agent to appraise it. She decided not to sell the place at the time, but started dating the agent.

"One day, we were driving in his big Cadillac and he told me how much money he made and I asked him if he thought I could sell real estate," she says. "You know how men are – he said, ‘Honey, you could sell anything.’"

Riffel got her real estate license and went to work at Sun Realty in Downtown Milwaukee. At the time, there were 18 people in the office and only one other woman.

Riffel started going by "M.J." instead of Mary Jane to protect her gender identity. People often thought "M.J. Riffel" was her father and that she was working for him.

"It was terrible at first. One man told me I should go home and take care of my baby," she says. "Any time I got a sale, they asked me which man helped me make it. I resented that."

The first month in real estate, Riffel made $1,500. "I thought I was rich," she says. "But then I didn’t earn a penny for two months after that."

The first location of the Milwaukee School of Real Estate was on 10th and Wells, in a building that was demolished to make room for the freeway.

"I thought the school was going to be a flop. There were just three people enrolled in my first class," she says.

But the school didn't flop. Instead, it flourished, and Riffel went from one class a week to eight, and eventually hired more teachers. Eventually, she had 17 instructors and three locations.

Riffel owned many properties during her career. She started out with five houses in the central city, which was a German neighborhood at the time, and went on to buy and sell many East Side properties on Oakland Avenue, Downer Avenue and more.

"I was one of the first women in the state to hold mortgages in my name alone," she says. "My little boy and I went around and collected the rents together."

Riffel was remarried in the late ‘60s to a man who convinced her to move to the South Side. "I didn’t want to go there. I was an East Sider. People thought differently over there," she says.

However, in 1970, the couple bought a house with a cottage behind it on Superior Street – where she still lives today. "We paid $32,000 cash for it, but it needed a lot of work," she says.

In 1973, Riffel published a book called "How To Combine Wild Imagination With Creative Thinking To Make Big Money In Real Estate." The book is still revered in the field and available for purchase on Amazon.com.

"That book paid for my son’s college tuition," she says. 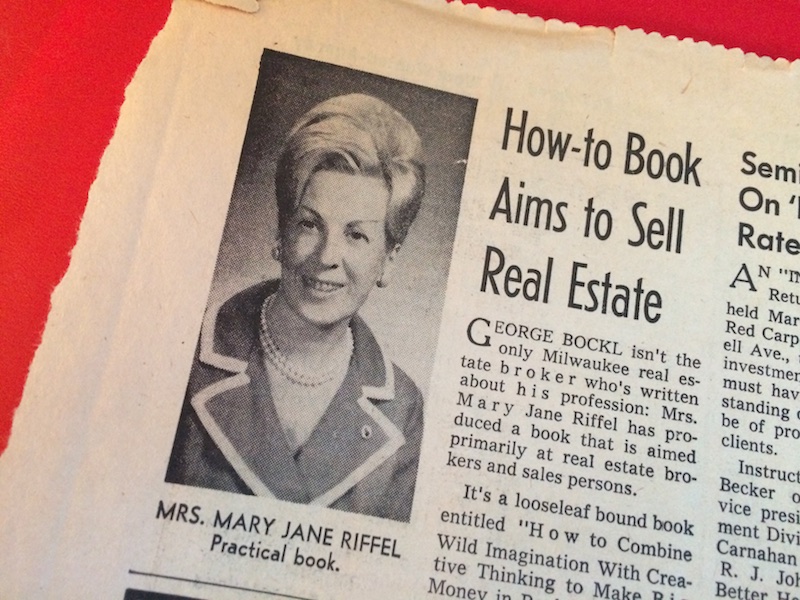 A few years later, at 58, Riffel was diagnosed with terminal breast cancer. She was told by her doctor to get her finances and will in order. Her husband was devastated and after receiving the news, the couple escaped to a friend’s hotel in the Wisconsin Dells.

"He cried the whole weekend, but I told him I had lived a good life," she says. "I wrote my obituary that weekend. It was pretty good."

The couple returned on Monday, and Riffel received a call from the nurse that she had cancer, but it wasn’t as bad as the doctor initially thought. She underwent 56 radiation treatments and beat the disease.

Riffel’s husband passed away 20 years ago, and she says a part of her died, too. She closed her school in the late ‘90s and gave up her license. Currently, she is working on a collection of short stories from her life. She has written more than 600 pages so far.

"I’m reading other collections, trying to figure out how to organize mine," says Riffel. "I enjoy writing, but I really should have kept my real estate license. I love real estate. I loved meeting people and getting them into the right house. Sometimes I still itch to buy something."