In case you've been wondering what's up with the plan for the Milwaukee Symphony Orchestra to remake the 1930 Warner Theater, 212 W. Wisconsin Ave., into its new performance hall, there's been plenty of progress, even if it might not look like it to passersby.

UPDATE: Since this article ran on May 1, the MSO closed on the purchase of the final properties required to move forward. Also, we've added four animated renderings of the project, courtesy of Kahler-Slater Architects. Scroll down to the end of the article to view those.

In case you’ve been wondering what’s up with the plan for the Milwaukee Symphony Orchestra to remake the 1930 Warner Theater, 212 W. Wisconsin Ave., into its new performance hall, there’s been plenty of progress, even if it might not look like it to passersby.

The Symphony closed on the building in December and has begun preparation work inside in anticipation of an official groundbreaking ceremony in the coming weeks. 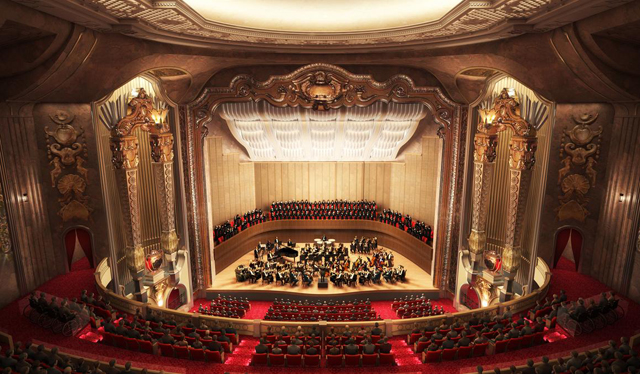 Since we first reported on the project in December 2016, the scope has expanded.

In terms of financing, MSO's Erin Kogler said the organization has raised a large portion of the funding required for the project.

"We're very pleased with the progress toward raising $120 million (required for the theater and an endowment), and we're having many meaningful conversations with community members about this project."

Recently, BizTimes reported that the project received more than $11 million in state historic preservation tax credits, the second largest amount ever for a single project. 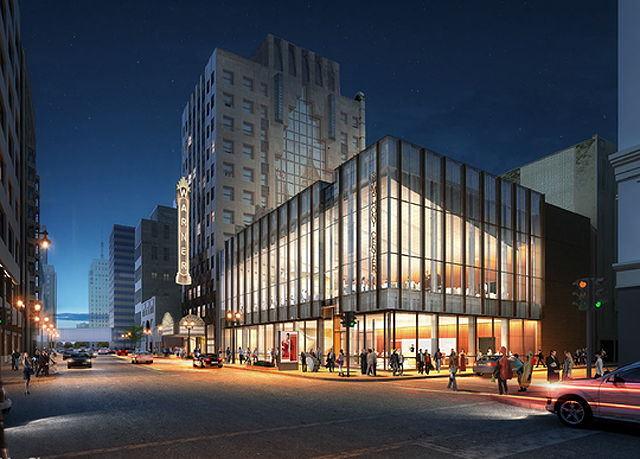 In the coming months the MSO will tear down the two-story former restaurant space on the corner, at 202 W. Wisconsin Ave. – built in 1936 and designed by Herman Buemming (though its original Moderne look is long gone) – which, over the years has been home to Wrigley's, as well as Burger King, Taco Bell and other eateries. 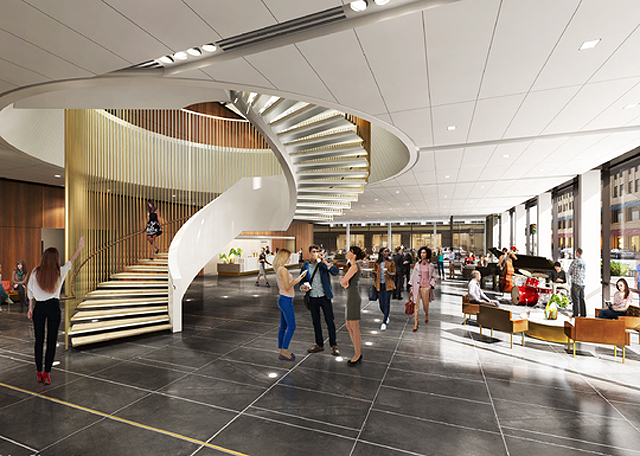 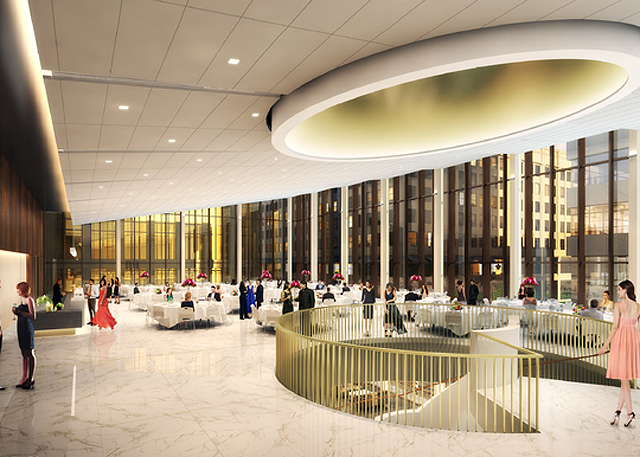 It will be replaced by an addition – designed, like the rest of the project, by Kahler Slater – that will have pre-concert reception space and an upstairs event room connected by a lovely grand spiral staircase. A skylight will afford views up to the Richard Hass mural painted on the side of the theater building.

The MSO also plans to buy some of the surface parking lot land to the north of the building to add another addition for support space like dressing rooms, restrooms and loading docks.

The deal for the parking lots was approved by the Common Council's Zoning, Neighborhoods and Development Committee on Tuesday. 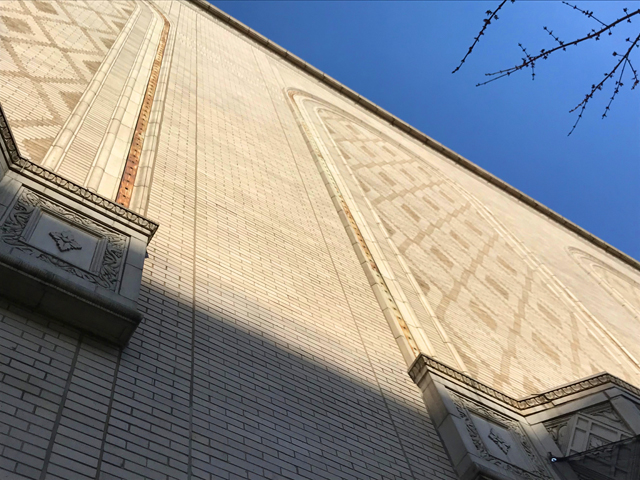 The most interesting work to see will be the moving of the theater’s east wall, which is the back wall of the stage, 35 feet out to the east.

Because the MSO is seeking historic tax credits, it must abide by rules set by the National Parks Service, which has said the wall must be moved as a single, large piece, rather than by dismantling and rebuilding it.

I’ll want a front row seat to witness that long, slow process, as the wall is braced on both sides and inched outward over the course of days. 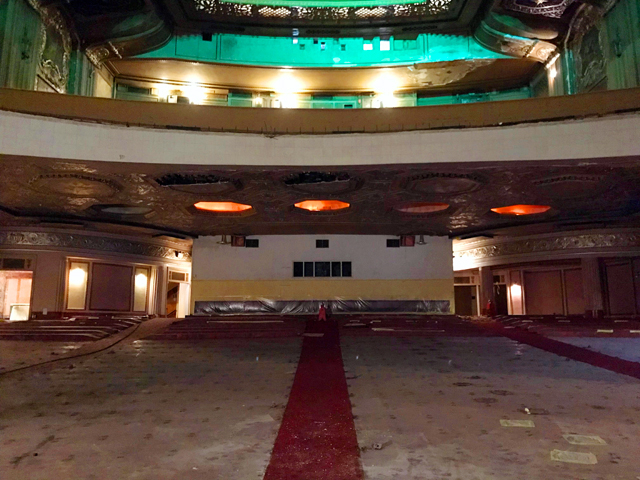 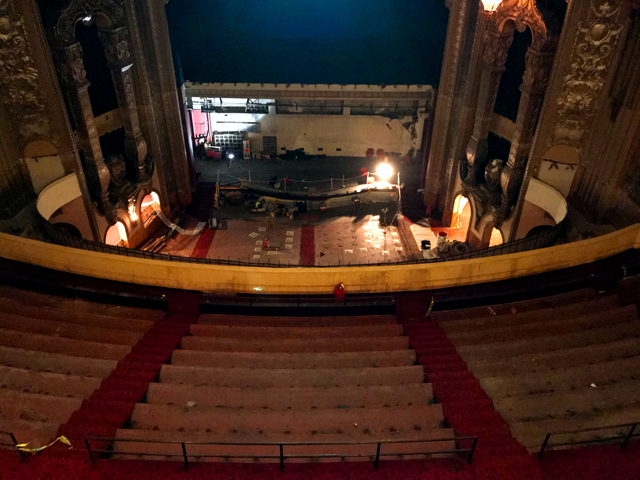 In the meantime, don’t think the project – currently slated to be ready by the second half of 2020 – isn’t making progress. When I visited this week, all of the seating had been removed so that new, more modern seating (that will match the auditorium’s French Neo-Baroque motif) can be installed.

At the same time, the basement was closed off as crews removed asbestos.

In the lobby, a giant timeline wall, papered with Post-It notes, is tracking the progress of the project. 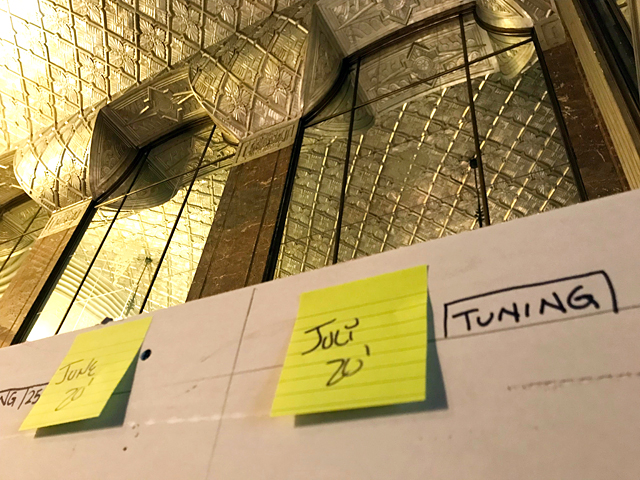 Still, just a few yards away, outside the front doors, you might not realize anyone is even inside. But that will change soon enough.

To paraphrase one of the Kahler Slater architects working on the projects, when the cranes arrive and the fencing goes up around the building, then folks will really know something’s happening.