Ever wanted to own your own brewery? Well, beginning today, you can. For just $200 you can become an owner of the New Barons Brewing Cooperative, a start-up brewery that will be operated democratically by members, all of whom have an ownership stake.

Ever wanted to own your own brewery? Well, beginning today, you can. For just $200 you can become an owner of the New Barons Brewing Cooperative, a start-up brewery that will be operated democratically by its members.

The brewery doesn’t yet have a brick and mortar location. However, thanks to co-founders John and Nora Degroote, Matt Witterschein, Mike Mack and Bill Booth, there is a vision in place that includes a brick and mortar brewery, as well as a tasting room where folks can enjoy both food and beer.

"Our vision is to create a taproom that’s more like a coffee shop." says John Degroote. "It’s a place where people can meet up, talk about their own projects, and collaborate with others. It’s also a place where we can host community events like art fairs and markets."

Currently, the partners are eyeing up warehouse/industrial spaces in the Greater Downtown area.

"We have our eyes on a few different locations," says Degroote. "Ideally, we’re looking for 6,000 to 8,000 square feet. But, for now, we’re focusing on building membership and then seeking out some larger investors. Once we have the capital to make our move, early members will have a say about where we open."

The idea for the New Barons Brewing Cooperative got its beginnings about a year and a half ago when engineer and home-brewer John Degroote decided to take his hobby to another level.

"I’ve been a home brewer for over nine years," he says. "And, like so many others like me, I always dreamed about having my own brewery. When I got married, my wife really pushed me to write a business plan and make it a reality."

As he delved into the process, Degroote says it became increasingly clear that he’d need a lot more capital than what he cold scrape together on his own.

"Crowdfunding was the first thing that came to mind," he says. "So I went down that road. But as I started researching, I came upon the idea of starting a brewing cooperative, and that idea just felt a whole lot stronger to me. Giving people swag for helping out is great. But the cooperative model provides so much more payoff. You’re not just throwing money at a brewery. You’re invested. You’re an owner in the business."

And the more Degroote dug, the more success stories he came across about brewing co-ops across the U.S.

"The first I came across was Black Star in Austin. They’ve been around for five or six years. And the more I looked, the more I ran into other cooperative breweries. There’s Full Barrel in Vermont, Bathtub Row in New Mexico, High Five in Michigan, Fair-state in Minnesota … the list goes on."

The lightbulb moment for Degroote occurred when he realized that a cooperative model was a powerful way to contribute to and reinvigorate the heritage of brewing in Milwaukee.

"Milwaukee used to have a ton of pride in its beer," he says. "There was Schlitz, Pabst, Miller … they were all a part of it. But, when they were bought up by bigger companies, they became kind of like the Voltron of beer. But, we’re at a moment when beer brewing has become a craft again. And Milwaukee really needs to capitalize on that. We’re the New Barons Brewing Co-op. And the message we can send is that we’re the new generation of brewers who are going to work to make this happen. If there’s anywhere that this will work, it’s Milwaukee."

Once he’d set his sights on creating a co-op, Degroote started talking to friends and colleagues about teaming up to breathe life into the New Barons Brewing Cooperative concept. His wife Nora offered to contribute her talents for social media and marketing.

Witterschein, a longtime friend, engineer and fellow home-brewer, came on as director of operations. Mack, who works in the financial field at PS Capital Partners, is the brewery’s financial guru. And Booth, a Manpower sales analyst with a talent for moving people to action, will handle public relations and community outreach.

Collectively, the group has been busy pulling together all the necessary paperwork needed to get the cooperative off the ground. The brewery officially made its debut at Co-Op Fest, an annual event organized by the Riverwest Cooperative Alliance which featured participation from area cooperatives including Brewery Credit Union, Just Coffee Co-op, Outpost Natural Foods Cooperative and the Riverwest Public House.

"We’ve all gotten pretty involved with other cooperatives in the area," notes Degroote. "Peter Murphy is on the board over at the Riverwest Public House, and he’s really pulled us in and gotten us involved. We’ve been part of round table discussions about cooperatives and how they work. It’s been really cool to see the power of people working together and making a difference."

Meanwhile, Degroote and Witterschein are completing the Barley to Barrel program through Crafter Space. 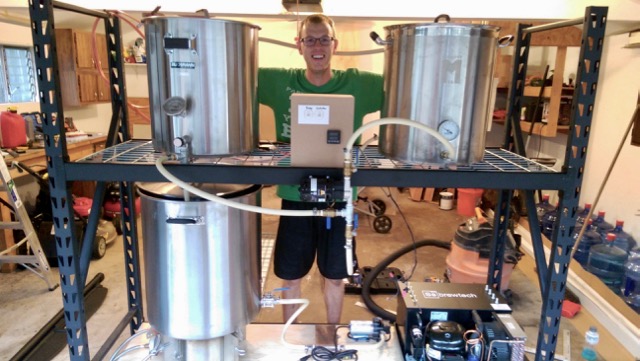 "The program has really made a difference in terms of the connections we’ve been able to make with people in the industry," says Degroote. "And their mission is kind of like ours. They really embody the educational part. And when they open up their space they’re really focused on providing room for education as well as contract space where new breweries can brew beer in larger batches."

Degroote says he’s excited to see the interest generated by the cooperative concept.

"We’d like to see traction within six months after securing larger investors. We don’t want to draw out the process. We really feel like we’ve learned from the mistakes that other cooperative breweries have made, and we don’t want to lose momentum among our members. So, we’re going to push really hard for Spring of 2017."

Thinking of making that $200 investment, but still wondering what the benefits of cooperative ownership are?

Well, if you’re a lover of or brewer of beer, there are plenty of spiffs. NBBC member-owners will have access to educational seminars, brewing equipment and community events and festivities sponsored by the brewery. Home brewer members will also have the opportunity to participate in brewing contests during which winners will be granted the opportunity to have their beer brewed and distributed through the co-op.

There’s also decision-making power. Owner investment entitles each cooperative member to membership voting rights, engaging them in decisions that impact the brewery’s operations and direction. These members will also share in the profits of the co-op through the annual distribution of dividends.

"The idea is that our owners will be able to play a democratic part in the decisions we make as a brewery," notes John Degroote, co-founder of the NBBC. "Since we’re just getting started, they’ll also be a part of the development of the brewery concept, including our location and other key decisions along the way."

Ownership, he underscores, is about being invested, involved and taking an interest.

"We’re looking for members who actually want to work with us," says Degroote. "We’re looking for home brewers, food and beverage industry people, bartenders, artists and architects who can assist us with our plans for the space. The idea is that there will be a host of opportunities for people to really get involved before we even have a brewery. And we’re really open to who those people will be and what they’ll bring to the table."