On the Burger Trail: The Milwaukee Burger at AJ Bombers

Deciding which AJ Bombers burger to eat for the Burger Trail series wasn't simple. After all, there's a laundry list of options from which to choose. But, since award-winning burgers should be the best of the bunch, I opted for the Travel Channel's Food Wars Champion The Milwaukee Burger.

Since its inception, AJ Bombers has rallied for the attention of burger lovers. From the burger joint’s ubiquitous presence on social media, to its uncanny ability to incite (and win) a local battle of the burgers on the Travel Channel’s’s "Food Wars," during which the local burger joint simultaneously became the most loved and/or hated burger joint in the city.

Burger competitions aside, the cleverly themed spot has a number of things going for it. For one, it has managed to capture the heart of children (and even the inner children of grown men and women) with its fun p-nut themed digs, which sport graffiti-covered walls and booths, a DIY ordering system and peanuts delivered by overhead "bombers." For another, the service tends to be efficient and friendly, an element that's an inextricable part of the restaurant experience. 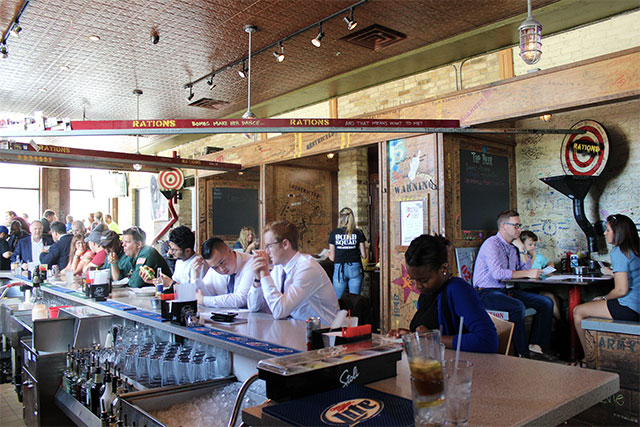 It was also one of the first venues in the area to get creative with burger toppings. Some, like the "Barrie Burger" feature unique ingredients like peanut butter (which is better on a burger than you might expect). Others, like the signature Bomber Burger, are served with a fried (or grilled) portabella mushroom cap stuffed with cheddar and muenster cheeses, along with lettuce, tomato and house sauce.

Deciding which burger to eat for the Burger Trail series wasn’t simple. After all, there’s a laundry list of options from which to choose, and each one can be modified to your liking. In most cases, I default to the venue’s "signature" burger … but in the case of Bombers, I was inclined to go in a different direction.

Since award-winning burgers should be the best of the bunch (and so should any burger sporting "Milwaukee" in its name), I opted for the Travel Channel’s Food Wars Champion The Milwaukee Burger, which features a quarter-pound burger, Wisconsin Colby cheese, Nueske’s bacon and Schlitz onions ($8.50). Fries don’t come with the burger, but I ordered some for an additional $2.55.

The Milwaukee Burger’s presentation is similar to what you’ll find at other burger joints. A lined metal tray cradles the burger and accompanying fries. The burger itself looked fairly tasty, with its visibly craggy edges, marbled melty cheese and caramel-colored bacon and onions.

The burger itself is reasonably tasty. Too thin to be cooked to order, it’s well smashed, resulting in a few tasty griddled bits on the edges (though I would’ve loved for there to have been more). On its own, the burger was well seasoned and vaguely juicy. Overall, it’s comparable to other quarter-pound bar burgers I’ve tried on the trail. It’s worthwhile to note that you can upgrade your burger to a 100 percent organic grass-fed patty for $2 more, which will give you meat with a distinctly fresh, robust flavor.

Toppings for this burger fell into the average range for me. The cheese was well melted over the patty, though I found myself a bit disappointed by its mild disposition, which simply didn't add a great deal of oomph. The bacon was sufficiently crisp, if a bit too curled to provide flavor to every bite. And the Schlitz onions were pleasantly sweet and vaguely beer-y, a nice touch.

Overall, the toppings complemented the burger, and there was a combination of sweet, salty and smoky flavors. As a result, I ate about half the burger as-is … I love it when a burger is good enough on its own that it doesn’t need additional condiments. But, I did bow to the urge to add a bit of ketchup and mayo in the end, as I felt the burger needed a bit of that salty, vinegary kick to really round out the flavors.

I found myself going back and forth on the value here. I appreciated the idea of the Colby cheese (though what it adds in terms of flavor is arguably negligible). The addition of Wisconsin-made bacon is a plus, and the Schlitz-infused onions are an oh-so-Milwaukee touch. So, I bumped it up a point beyond "average"... but is this the most value you’ll get in a burger? Likely not. It's more a case of "you get what you pay for."

Is the "Food Wars" champion burger at AJ Bombers full of beefy goodness? Or just a lot of hype? As with most things, it’s a bit of both.