On the Burger Trail: The Tavern Burger at Buckatabon

... the story of a tavern burger that's really a smash burger. Sort of.

Buckatabon (AKA Frank and Larry’s Buckatabon Tavern & Supper Club) was among the remarkable number of restaurants which opened to the public during the early portion of the COVID-19 pandemic. And, like so many others, the restaurant moved boldly forward, adapting its Northern Wisconsin supper club and tavern menu to accommodate carry-out and eventually opening for limited dine-in and patio service.

On the menu, folks will find everything from casual sandwiches and burgers to full on supper club inspired entrees like bacon-wrapped filet and crab and brie stuffed salmon to Persian lamb shank, curry cauliflower steak and prime rib (on Fridays and Saturdays only).

Among the selection is the Tavern Burger, which appears on both the lunch and dinner menus. It features two quarter-pound smashed beef patties topped with cheddar, caramelized onions and pickles on a toasted brioche bun. It’s served with steak fries for $13.95 (an Impossible Patty can be substituted for an additional $3). 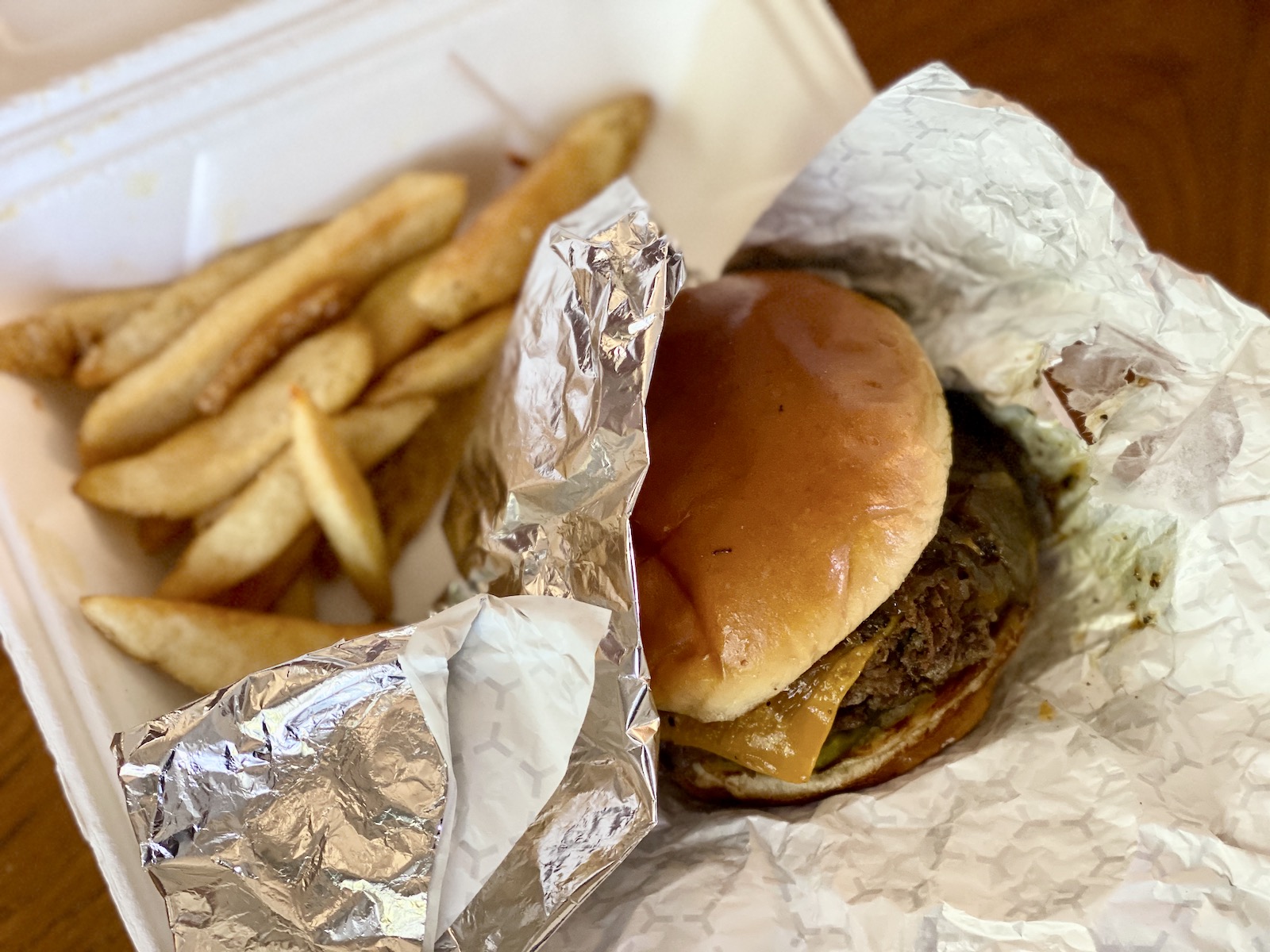 The burger was relatively smartly packaged. The burger itself was wrapped in foil lined paper and placed astride the fries (in an eco-friendly take-out box), so the burger retained its heat; but didn’t pass along any added moisture to the fries. It also unpacked splendidly, maintaining the loft of the bun and visible layers of toppings from the nicely melted cheese to the  well-caramelized onions. Even more, the savory smell wafting up from that box was enough to inspire hunger.

The brioche bun was consistent with the standard. It was soft, slightly dense and sweet. It was well sized for the burger and held its shape well. The cut sides of the bun were slightly toasted, though the bulk of the toasting was apparent around the edges where the bun had a soft, slightly golden hue.

Before I talk about the patties, I need to admit that the name of this burger took my mind for a twirl. After all, pub- or tavern-style burgers are typically plump and juicy, featuring up to a half-pound of beef with a nice external char that gives way to a tender, mid-rare center. Conversely, smashed burgers are griddled diner-style, smashed thin on a flat-top and cooked until crisp around their thin edges.

But, despite the name, these were thin patties. They had the loose build and slightly irregular shape of a smashed burger, plus plenty of brown caramelized doppling on either side. But the patties were slightly thicker than I’d expect, especially around the edges, which weren’t thin enough to effectively crisp up.

The meat itself was slightly juicy and just fatty enough to retain a slight greasiness. It was only ever so lightly seasoned (if at all), so the flavor was clean and slightly beefy and it welcomed the saltiness of the cheese, which boosted its flavor.

Unfortunately, things fell apart a bit when it came to the toppings. On the lovely side, the cheese was flavorful and nicely melted. The tang of the cheddar came through beautifully (which isn’t always the case) and gave a boost to the slightly under-seasoned burger.

The pickles were also stellar (and generously applied). They were crisp with a classic flavor and because they weren’t an afterthought you got a bit of acid with every bite. If you LOVE pickles, you’ll be happy to note that they send along extras to enjoy alongside.

But that’s where it ended. I’m not sure what happened. I’m not sure if it was purposeful or accidental. But the onions (on both burgers that I tried)  were missing every last ounce of caramelized sweetness that would have made them a phenomenal addition to the burger.

In fact, they were so heavily (over)seasoned that their saltiness made my tongue tingle. They were flavored with what seemed to be a blend of seasonings which possessed a ton of umami flavor and a very prominent showing of pepper (you can see it in the photograph). There was, in fact, enough black pepper that it gave the burger a slight kick.

The super-salty onions, which were piled on top of the burger (opposite the pickles, which were underneath the burger), made for a truly bizarre eating experience. Since the bulk of the seasonings were concentrated in one place, rather than distributed throughout, they prompted everything to feel way out of balance.

Having never eaten this burger before, it was difficult to determine if this is how the burger was intended to be (though that’s doubtful) or if the kitchen was just having a bad day. I hope it was the latter.

At $13.95 with fries, The Tavern Burger falls in the average category in terms of price. But, since value takes quality (and quality control) into consideration, it doesn’t come out to quite as good of a deal as it could be.

This burger confused me just as much as its name.