On the Burger Trail: The Mr. Fungi at Cudahy Burger Joint

The Cudahy Burger Joint is a quaint little restaurant that conjures the look and feel of an old school burger and malt shop. But how would their version of a mushroom Swiss burger stack up against the best of the best? We went to find out.

Open since 2015, the Cudahy Burger Joint is owned and operated by Jay Mulloy and Erin Hanratty, former owners of Milwaukee’s Uncanny Soup Co. The quaint little burger restaurant offers a rustic atmosphere that conjures the look and feel of an old-school burger and malt shop.

The walls feature classic photographic depictions of the Cudahy strip, along with art featuring the likes of Marilyn Monroe, Elvis and classic cars. Meanwhile, there’s seating at 10 or 12 two-top tables, as well as bar stools at a counter along the windows. 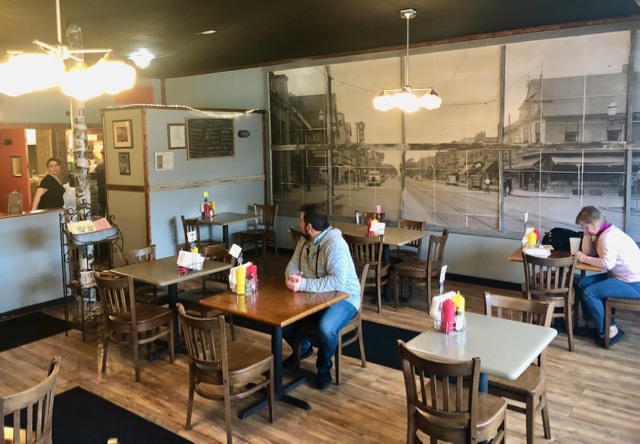 Even on a Friday night (albeit fairly early), the restaurant wasn’t packed with people. However, their carry-out business was swift, with countless orders picked up by Uber Eats and Grub Street drivers over the hour or so we were there.

But in recent months, more than one person has suggested that the restaurant serves up one of the best mushroom Swiss burgers in the area. So I ordered up the Mr. Fungi a third-pound patty topped with Swiss cheese, caramelized mushroom medley and truffle mayo ($9). Burgers come with a side of fries or tater tots. And gluten free buns are available for an additional $2.

Pro Tip: If you go, do yourself a favor and order up a shake or malt. They’re served up soda fountain style in countless flavors including classic options like chocolate and strawberry, along with more creative options like mocha latte (which was delicious).

Burgers are served up in plastic baskets lined with black and white checkered paper alongside a generous portion of crisp fries. In the case of Mr. Fungi, the burger featured a nicely griddled burger, visible mushrooms and plenty of mayo peeking out from beneath its glossy bun.

The brioche bun was super glossy, pleasantly soft and possessed a nice sweet flavor, which was a nice foil for the earthy mushrooms. It was also expertly crisped on the grill, enough so that it not only provided a protective barrier against the burger’s juices, but also a nice amount of texture. The burger itself was a good size for the burger; it didn’t overpower the sandwich, and it held up well to the toppings.

The third-pound patties are cooked to medium (155 degrees according to the menu). Mine was tender on its interior, with a nicely caramelized exterior. It was well seasoned and greasy, in a good diner-style burger way. The flavor was sufficiently beefy, and the patty was large enough to stand up on its own, but not so large that ordering a double (for $3 extra) would have created a burger that was difficult to eat.

The toppings posed a mixed bag for me. There was a slice of Swiss, which had been nicely melted over the top of the burger. The mushrooms were nicely caramelized with a good amount of earthy flavor. In fact, I would’ve been happy if the burger had been topped with more of them.

My one hesitation about ordering this particular burger was the truffle mayo; I tend to avoid it, as I feel it often imparts an artificial truffle flavor. And that was true in this case. And there was quite a bit of the mayo, so its flavor tended to overpower everything around it, including both the mushrooms and Swiss cheese.

Next time, I’d be inclined to build my own mushroom Swiss burger, adding a bit more cheese and mushrooms and passing on the mayo (or subbing in some garlic mayo instead).

At $9, this was a well priced burger. And it was a relatively solid one. Best burger of my life? Not so much. But, it was a solid diner-style burger that I’d probably eat again (minus that pesky truffle mayo).

If you’re looking for a solid diner-style burger, you can find one right on the main drag in Cudahy.