On the Burger Trail: The Double B Burger at Double B's BBQ

The bulk of the menu at Double B's BBQ is comprised of Memphis-style hickory smoked barbecue. There are ribs, brisket, pork and chicken, all prepared in an Ole Hickory pit smoker on the back patio. But, there are also burgers, reputed to be well worth the trip.

There have been barbecued meats coming out of the kitchen at Double B’s since 2012, when Scott Bunker – owner of the former Bunker’s – installed a smoker on the bar’s patio and reopened the bar under the Double B's BBQ & Burgers moniker.

At that point, the kitchen was run by chef Paul Freeman. But in September 2015, Mark and Judy Timber took over operation of the restaurant, which has since built a name for itself as one of the best barbecue restaurants in town.

Folks can sit on the restaurant’s patio during beautiful summer days or enjoy the barbecue inside the cozy restaurant, which is decked out in repurposed wood and barbecue-related paraphernalia. 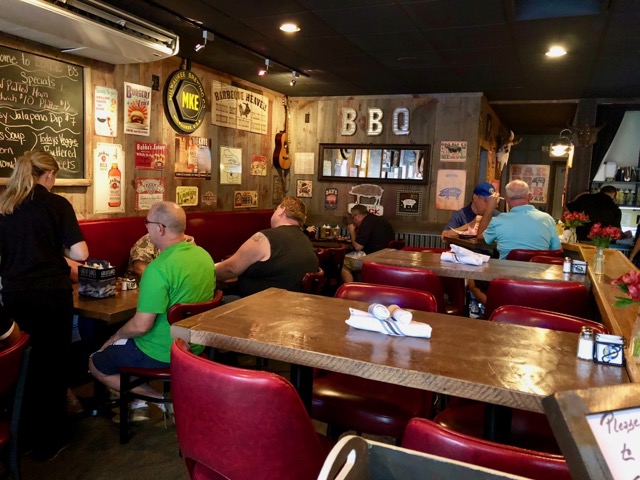 The bulk of the menu is comprised of Memphis-style hickory smoked barbecue. There are ribs, brisket, pork and chicken, all prepared in an Ole Hickory pit smoker on the back patio. But there are also burgers – reputed to be well worth the trip – and they became the reason for my latest visit.

I nearly always order the signature burger, if there is one. At Double B’s, that appears to be the Double B Burger, a half-pound Angus burger topped with cheddar cheese, your choice of barbecued pork or brisket (I chose pork), KC sauce and French’s onions ($12). The burger comes with your choice of sides: french fries, smokehouse beans, mac ‘n cheese, mashed potatoes, cole slaw, cornbread, vegetables or sweet potato fries (for an extra $0.50).

Pro tip: If you’re extra hungry, head to Double B’s on Wednesdays. Beginning at 5 p.m., you’ll get three free plucky smoked wings with the purchase of any platter or burger. 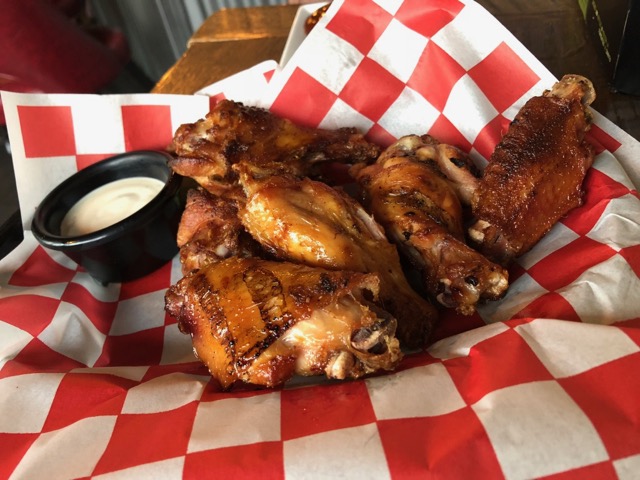 The Double B is a hefty burger, piled high with pork and boasting a fair amount of melted cheddar cheese, which was visibly making its way down the side of the char-grilled burger patty. Overall, mine was a mouthwatering sight, with the possible exception of the lettuce, which was displayed on the side. It was a small piece of leaf lettuce, still slightly frilly but badly wilted beneath two crisp slices of sweet pickle. Yes, in this case, the details matter.

The brioche bun was well appointed. It was nicely toasted and its sweetness echoed the subtle sweetness of the pork and barbecue sauce. It also did a surprisingly good job of mopping up all the juices that flowed from the burger – which were significant.

These folks deal with meat for a living, so it wasn’t a huge surprise to find that my patty was, indeed, cooked to order. It arrived a tender mid-rare with a nice exterior char. The meat itself was tender, and there were plenty of juices (enough to make the burger messy to eat). But the burger had one Achilles heel: It was under-seasoned. It’s an element that wasn’t a complete deal breaker; the plentiful pork and sauce offered up a good deal of flavor. However, it caused it to fall slightly short of being delicious on its own.

I’m not always a fan of cheddar on burgers; typically its flavor gets lost. However, in this case, it was an asset. It came nicely melted and the flavor showed through against the pork.

I’m often not a fan of burgers that sport barbecue sauce, as I feel the flavor often overpowers everything else. However, the sauce here was added with a prudent hand, offering up a bit of sweet flavor without being overwhelming. The same went for the pork, which – despite being plentiful – simply added a bit of smoke and an indulgent, fatty unctuousness.

What I didn’t note was the presence of the French’s onions. And that was a shame. Since both the pork and burger were tender, they would have offered a welcome bit of texture to the otherwise soft burger.

In some ways, this was two sandwiches in one. There was plenty of pork, and the burger was a meaty half-pounder. Both made the $12 price tag well worth the cost.

If you love the idea of smoked meat piled high on a burger, you'll find it at Double B’s BBQ.