On the Burger Trail: The DW Burger at Drink Wisconsinbly Pub

If you're looking for a place built on Wisconsin kitsch, this is your spot. From cheese heads and classic tavern decor to fried cheese curds and SoulBoxer Old Fashioneds poured straight from a barside bubbler, Drink Wisconsinbly is pretty much a spot-on tongue-in-cheek ringer for any one of the state's Northwoods taverns.

If you’re looking for a place built on Wisconsin kitsch, this is your spot. From cheeseheads and classic tavern decor to fried curds and SoulBoxer Old Fashioneds poured straight from a barside bubbler, Drink Wisconsinbly is pretty much a spot-on tongue-in-cheek ringer for any one of the state’s Northwoods taverns. 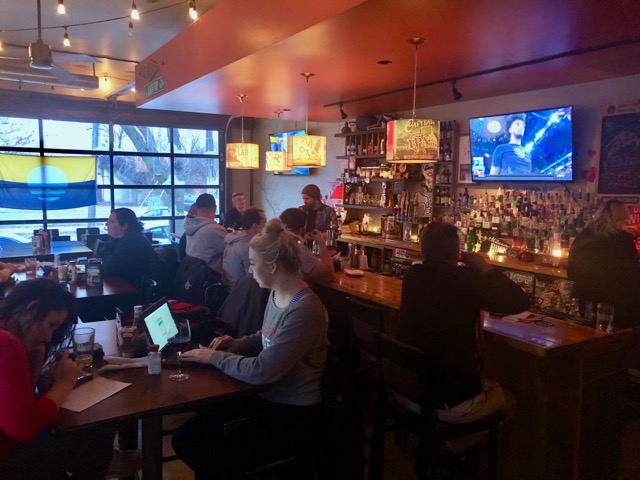 When it comes to burgers, there’s also a dose of Wisconsin flair. I was tempted by the prerequisite butter burger – a classic that was invented in Wisconsin – featuring a 4-ounce smash patty, American cheese, iceberg lettuce, a Beefsteak tomato, red onion and mayo served up on a potato roll with a pickle spear ($11).

But, in the end, I opted for the namesake burger, the DW Burger, which featured a 6-ounce grilled beef patty, Merkt’s cheese spread, applewood smoked bacon and both caramelized and crispy onions on a buttered bun ($14).

The DW is well presented. The bun is glossy and the burger impressively thick. There’s a good showing of curly criss-crossed bacon, and the Merkt’s cheese was (initially) nicely distributed over the top of the burger. Meanwhile, there was height from the crisp onion strings, which were pretty delicious on their own.

On the outset, I was prepared to give this bun a solid score of at least "8." After all, it’s pretty and shiny, and the interior of the bun was lightly toasted, just enough to give it a subtle crispness. However, as I ate the burger, its faults became apparent.

The bun was cut so that the bottom was quite thin and the top fairly substantial. What that means is that the lower half quickly soaked up the juices from the burger, growing compacted and falling apart as I was eating. Meanwhile, the thick pillowy top contributed far to much bread to the mix, leaving me with the sense that it was "too much bun" for the burger.

The DW is a fairly hefty patty, weighing in at 6 ounces prior to cooking. So you do have a choice about how your meat is cooked. As usual, I opted for medium-rare. And it was a request that was granted. My burger was nicely charred on the exterior, but pleasantly (and increasingly) pink as I journeyed toward the center.

The juices from the burger swiftly soaked the bottom bun; but the patty itself didn’t exhibit much juiciness at all.  It was thick and tightly packed, and the edges were notably dry, leaving the initial bites of the burger wanting.

The beef itself (advertised as being sourced from Ney’s Big Sky Ranch) tasted heavily of iron, to the point that it was a bit distracting. The burger wasn’t overly seasoned – a good thing, in this case, the toppings were plenty salty on their own.

I wanted to love this classic Wisconsin combination of Merkt’s cheese spread, bacon and onion strings. And there was plenty to love about the texture that the ultra-crisp bacon and onion strings brought to the table. I thought the flavor of the Merkt’s was quite nice, but I had no idea that, when heated, the texture of the cheese spread gets strange and gloopy, offering both uneven flavor and a strange, sometimes gritty texture. As for the caramelized onions, they were lightly colored and sparse. I barely noticed they were there.

As I ate, I couldn’t help but wonder: what’s missing? And then it became clear. Every topping erred on the salty side. So, the burger – as a whole – lacked the optimal balance of sweet, salty, sour and umami. And ketchup wasn’t the answer (I tried it on my last few bites, and it didn’t really add the necessary flavor).

When I pay $14 for a burger, there are expectations that come along with that price tag. I want carefully sourced, well-cooked meat, thoughtfully chosen toppings and a bun that holds it all together. Sadly, this burger didn’t really prove its worth.

Drink Wisconsinbly’s namesake burger was a bust for me, making me wonder if I should have opted for their butter burger instead.