On the Burger Trail: The Bigger Mac at Elsa's on the Park

What happens when you pair a classy space with top-shelf spirits with a casual menu? You get a spot like Elsa's that attracts corporate lunch-goers by day and a hot see-and-be-seen crowd at night. But, how are the burgers at Kopp's little sister restaurant?

What happens when you pair a classy space with top-shelf spirits with a casual menu? You get a spot like Elsa’s that attracts corporate lunch-goers by day and a hot see-and-be-seen crowd at night.

You might guess, from the decor, that Elsa’s first opened its doors in 1980. However, if you weren't in the know, you'd find it considerably harder to guess that Elsa's is owned by custard mogul, Karl Kopp (of the ever-popular Kopp's Frozen Custard). 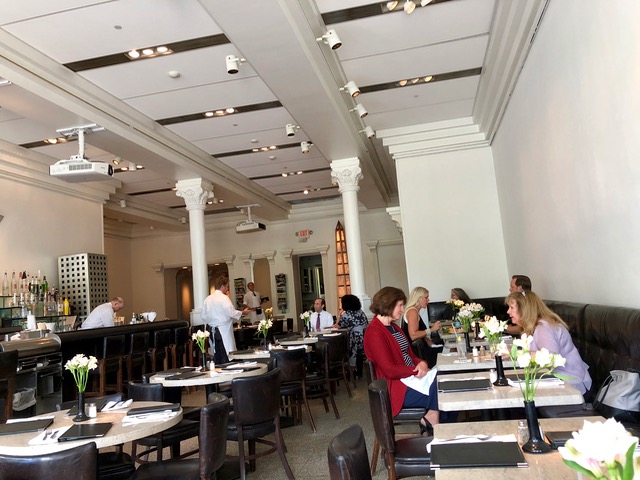 However, knowing that, it should come as no surprise that Elsa’s serves a great burger, albeit a slightly more expensive, grown-up version. In fact, I’ve eaten a number of them in my time. Normally I’m a Burger Au Poivre gal (a choice I nearly never regret). But, I decided to depart from my usual choice in favor of trying out the crowd favorite at this popular hang-out.

According to our server, the most popular burger served at Elsa’s is the Bigger Mac. So, that’s what I ordered. It’s comprised of a 9 oz. burger patty topped with Thousand Island dressing, American cheese, pickles, lettuce and grilled onions on a toasted sesame roll. And it’s Elsa’s, so you also get a few fresh seasonal pieces of fruit and veggies ($12.75).

The Bigger Mac isn’t a bad looking burger. It’s big. You can tell that it’s meaty, and I love the way a few of the ingredients peep out from beneath that big brown bun. To top things off, the added color of the fruits and veggies on the plate keep things looking fresh and bright.

If I went by looks alone, the bun would've easily scored an 8. It was beautiful and browned, and there was a nice balance between the top and bottom. It was also adequately soft and seemed capable of standing up to the juicy burger. But things went awry when I picked up my burger and found my fingers covered in oily sesame seeds. They were stubborn little suckers, latching onto my skin so much that a simple brush with my napkin wasn't enough to knock them off. Worse yet, after taking a few bites of the burger, it became painfully obvious that the bun to burger ratio was off. There was simply too much bun, so flavors were muted and the deliciousness of the burger itself wasn’t really allowed to shine through. It's a shame, really.

The burger was pretty darn good. It wasn't quite cooked to order. My "medium-rare" burger tended more toward medium; however, it was still plenty juicy (you can actually see in the photo that the meat juices were starting to soak into the edges of the bun). The loosely packed burger was moderately seasoned and carried not only a vibrantly meaty flavor, but also a hint of crust from char-grilling. And – most importantly – its size seemed balanced in conjunction with the toppings (with the exception of that huge bun).

The burger’s toppings were good too. The Thousand Island dressing was tangy, and there was just enough to add flavor and moisture, but not so much that it oozed everywhere or overwhelmed the other flavors. The same goes for the cheese, which had a notable presence but wasn’t excessive. I loved that there were enough pickles to give the burger a nice vinegary balance. I wouldn’t have complained if there were more fried onions, but the ones that were there gave just enough flavor that it wasn’t a deal breaker.

At $12.75, this burger is a decent value. It’s a decent portion, so you’re not going to go away hungry. It won’t blow your lunch or dinner budget. And if it’s your pick for late night eats after drinking, that big old bun might just come in handy to soak up some alcohol.

The Bigger Mac is a great burger with one failing: its bun. It's proof positive that building a truly great burger is all about the balance.