On the Burger Trail: The Chimay Burger at Ferch's Crafthouse Grille

Get this burger while you still can.

It’s been about a year and a half since the former World of Beer on Mayfair Road transitioned into Ferch’s Crafthouse Grille, a concept run by the family behind the former Ferch’s Malt Shoppe & Grille (which closed in October) and Ferch’s Beachside Grille in Grant Park

The beer-focused bar and restaurant, tucked unassumingly in the corner strip mall on the corner of Mayfair Road and Bluemound, features a heated covered patio and modern industrial bar and dining room, offers a menu of beer-friendly items from loaded tots and beer cheese nachos to WOB (World of Beer) chicken wings, tacos, flatbreads, sandwiches and burgers.

But, their lunch and dinner menus also list the Chimay Burger, which features a monastic ale-washed Chimay cheese produced by the monks at the Abbey of Notre-Dame de Scourmont. That was really all I needed to see.

When I called in my order for pick-up, they asked how I’d like my burger done and gave me an estimated pick-up time of 15-20 minutes. But they also informed me upon arrival that, while they have all the ingredients for the Chimay Burger, it’s not officially on the menu anymore.

So…  if you want to try the burger, it might be advisable to do it soon, since it sounds like there’s a possibility it might not be around for much longer. 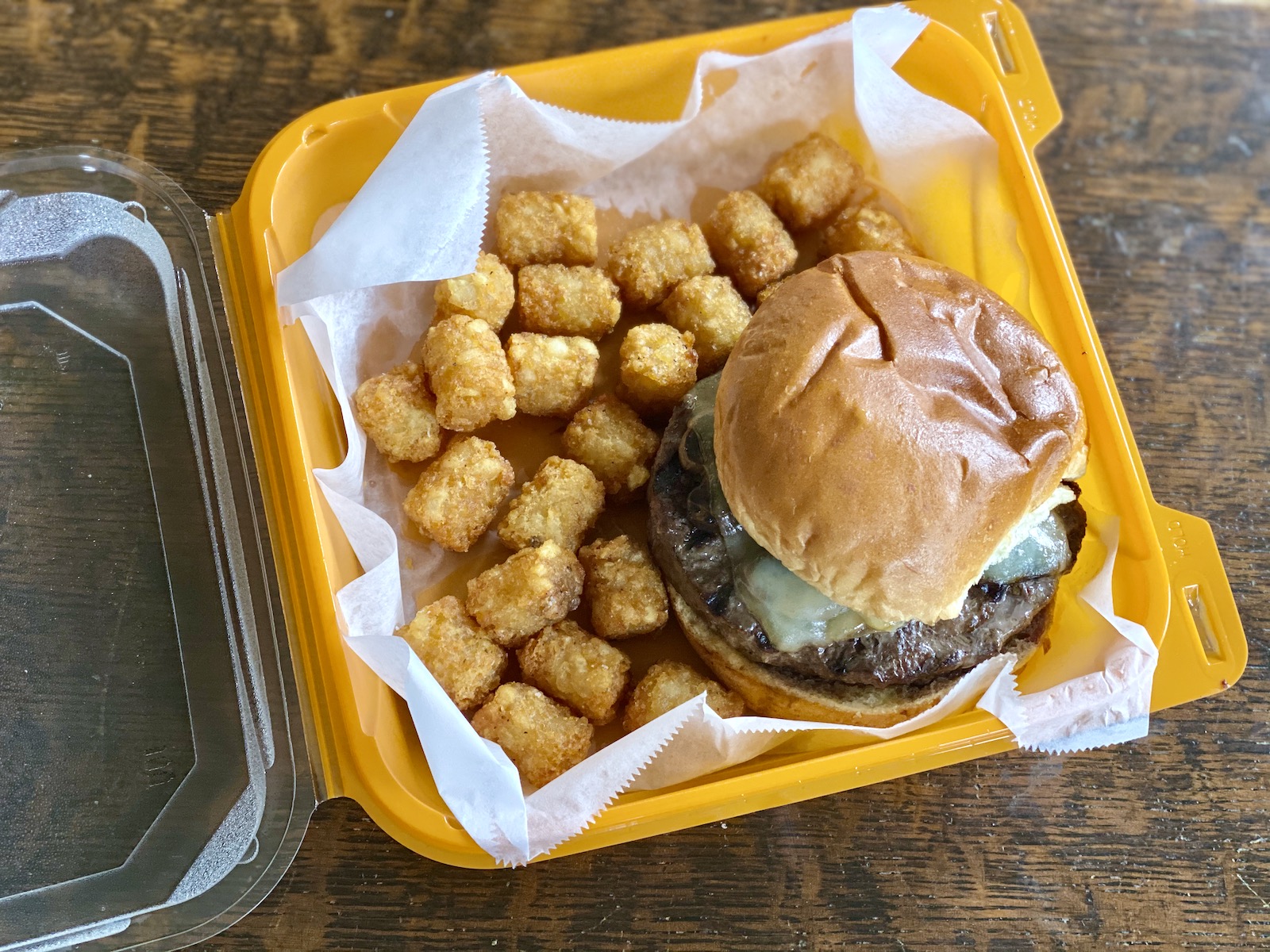 The Chimay Burger features a fresh Angus beef patty topped with Chimay cheese, sauteed mushrooms, caramelized onions and garlic aioli ($13.50). All burgers are served with a choice of tater tots or steak fries (which on our order turned out to be crinkle-cut fries). For +$1, you can substitute sweet potato fries or macaroni and cheese. Gluten free buns are also available for +$1.50.

The burger came simply packaged in a snazzy orange plastic container (made from recycled plastic beverage containers) lined with paper. It traveled fairly well, arriving warm, with all of the toppings well intact and the tots still crisp. As for its appearance, it didn’t sport many frills; but it showcased a big, beefy burger with  visible grill marks, layered with nicely browned mushrooms, melted cheese and a peek of garlic aioli.

The brioche was fresh, soft and just slightly sweet. It was nicely toasted on both of its cut sides and more than appropriately sized for the substantial beef patty, offering an ideal meat-to-bun ratio. It also held up well.

The burger came nicely cooked, slightly charred on the exterior and medium rare within. It wasn’t notably seasoned; but it was juicy with a clean beefy flavor that was punctuated by distinctively char-grilled notes. For those who love that meaty, slightly bitter char that’s unique to a char-grilled burger, this was dead on.

The toppings were simple and flavorful, most notably the Chimay cheese, which had a mild, earthy flavor that hinted at more complex notes and maybe even a bit of malty beer flavor. It wasn’t as sweet as the typical Alpine style cheese used on a mushroom Swiss burger, but it played well with the nicely browned mushrooms over which it was melted (they were earthy and deeply flavored, if applied with a bit of restraint).

The onions too, were tasty. They weren’t caramelized in the true sense of the term, which was a bit of shame. That sweet umami flavor would have been fantastic here. Instead, they were lightly browned, a bit sweet and still toothy (almost crisp tender), suggesting they were cooked fairly quickly.

Things came together thanks to the garlic aioli, which was flavorful but not overpowering, and deftly  applied to both sides of the toasted bun.

When it comes to value, this burger sits right around the average mark. But it’s well prepared with quality ingredients, plus a special  (and delicious) cheese with a long, storied history that makes it all the more alluring.

It’s a shame the Chimay Burger is being phased out. It’s definitely a step up from the usual mushroom Swiss.