The menu at Riverwest Filling Station features an eclectic selection of both American and internationally-inspired fare as well as a well curated menu of craft beer. But it also turns out it's a hidden gem of a spot to eat a burger.

Riverwest Filling Station is tucked away on the North end of Riverwest, nestled between industrial development and residential homes. Some likely remember the spot, since it housed the popular Albanese's Italian restaurant for many decades. But, this new-school spot, which opened in 2013, brought new energy to the area, breaking ground as the first restaurant in the city to offer craft beer for take-away in growlers. 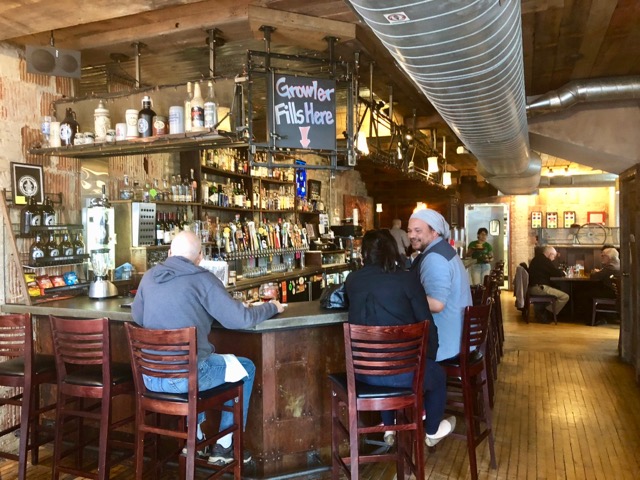 The menu features an eclectic selection of both American and internationally-inspired fare (think appetizers like baba ghanouj, Indonesian scallop curry and a Middle Eastern spiced chicken schnitzel sandwich) as well as a well curated menu of craft beer. But it also turns out it’s a hidden gem of a spot to eat a burger.

I opted for the namesake burger, the Filling Station, which features an 8-ounce charbroiled stout-marinated burger patty, topped with Fontina cheese, stout-glazed mushrooms and onions and garlic stout aioli ($13).

There’s nothing overly frilly about this burger. However, it came well assembled with its soft shiny brioche bun, a thick pub-style patty and a delicious melty mix of fontina and onions sliding gracefully down the edges of the burger. Mouthwatering is one way to put it.

Brioche was a nice choice for this burger, which benefited from the bun’s innate sweetness. Its top had a nice sheen and the interior was beautiful and soft, toasted on both the top and bottom. That wasn’t quite enough from keeping the bottom bun from being saturated by the juicy burger, but it was enough to keep things relatively intact.

The burger here was the true star. It was cooked-to-order and delivered sporting a beautiful mid-rare interior. I didn’t taste the stout in the burger, but that wasn’t a deal breaker. The patty itself was nicely seasoned with a good fresh beefy flavor. The grind was loosely packed and the burger was deliciously juicy, enough so that it all but destroyed the bottom half of the bun.

The beer that wasn’t evident in the burger patty was more than present in both the mushrooms and onions, which were nicely cooked. They harbored both a pleasant sweetness that was balanced by the backbone of the beer, adding both flavor and moisture to the burger. Fontina was a nice choice here, as the cheese melted beautifully, mingling nicely with the onions and coating every bite of the burger with cheese. Meanwhile, the garlic aioli offered a nice richness and hint of garlic, rounding things out nicely.

At $13, this half-pounder sits squarely in the average range for pub-style burgers in Milwaukee. And it was worth its weight. It was meaty and well composed, and – despite its heft – I found myself continuing to eat it right down to its last bite. It was also served with a fair portion of fries, an element I was too full to finish once I’d gotten through the burger.

Hungry for a more-than-solid burger in Riverwest? This might be the hidden gem you’ve been looking for.