On the Burger Trail: The Rising Sun at Fontelle's Eatery

Zocalo Food Park is definitely a good place to eat a burger, thanks to Fontelle's Eatery, a brand new food truck concept serving up globally inspired sandwiches and loaded fries.

Head to the Zocalo Food Park for lunch or dinner and you’ll find a satisfying mix of food vendors serving up freshly baked bagels, tacos, loaded fries, Asian inspired bowls and ice cream. Take a seat at the park’s newly minted tavern and you’ll find craft brews, cocktails and even a glass of wine, if that’s your fancy.

There’s both indoor and outdoor seating, cornhole and bocce ball and live music twice a week. It’s a community space, a place to laugh with friends and maybe even learn something new. But it’s also a place to eat a burger, thanks to Fontelle’s Eatery, a brand new food truck concept serving up globally inspired sandwiches and loaded fries. 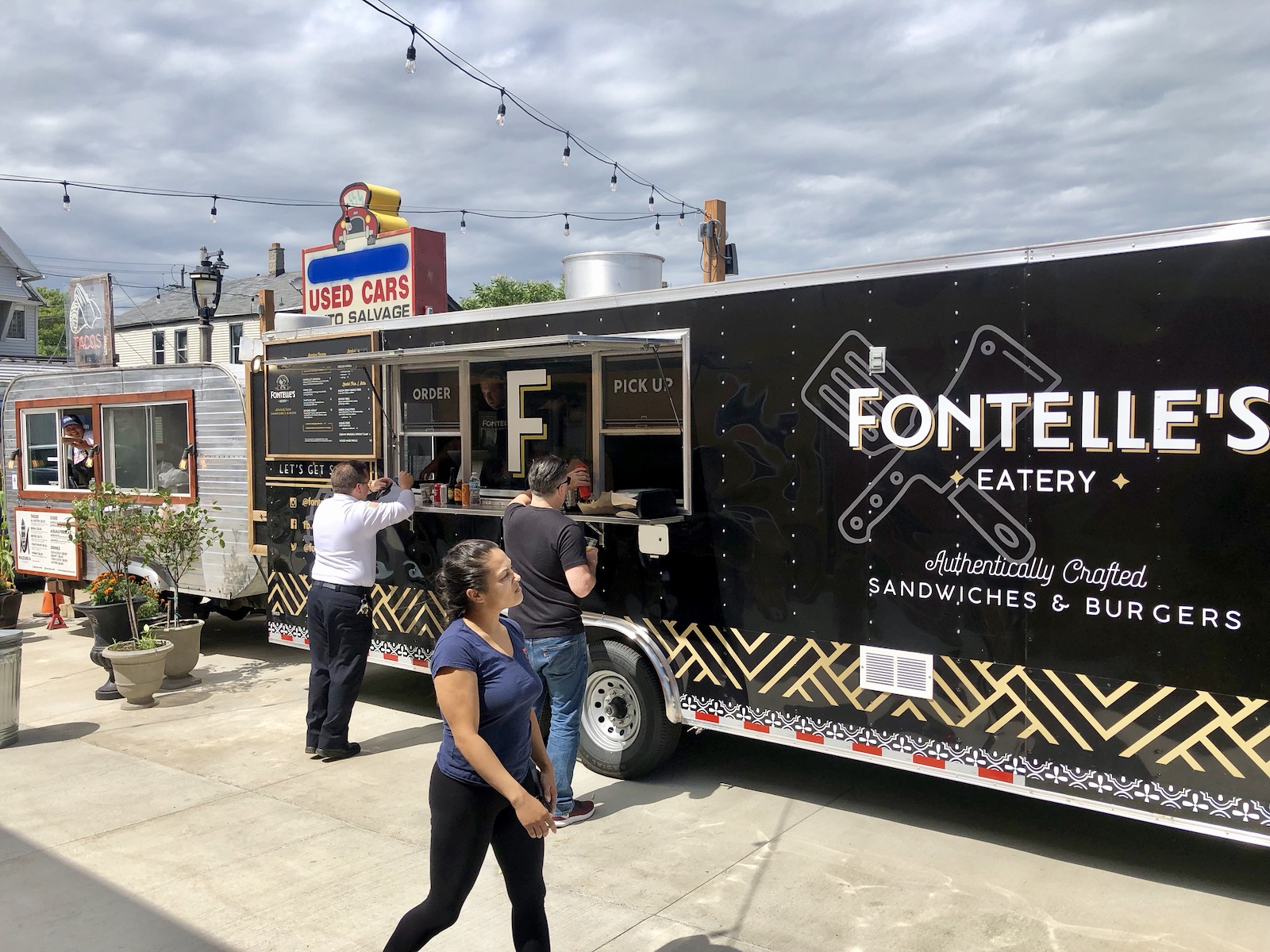 Their menu focuses on ⅓-pound smash burgers decked out with a varied collection of fixin’s, including housemade sauces and pickles. You can certainly go basic with the Fontelle's Original topped with housemade pickles, lettuce, tomato, onion and Eddie's special sauce. But it’s worth your while to branch out, as I did on my latest trip.

I ordered the Rising Sun, a burger topped with cheddar cheese, caramelized kimchi, gochujang and topped off with a fried egg ($10). You can certainly add fries to your order, but I opted for the creamy Brussels sprouts slaw instead ($3).

Paper boats are the standard for food truck fare, and the burger and slaw filled one up nicely. The substantially sized burger stood out with its deeply caramelized bun under which you could catch just a glimpse of the craggy burger patty and a glint of cheese. But the burger was cloaked by a soft cooked egg, glistening white, with a stream of chili-orange sauce running across its top. And the odor wafting up from the tray? Hunger-inducing.

The bun looks a lot like a pretzel roll, with its glossy brown exterior. But take a closer look and you’ll find an eggy yellow interior, a soft bouncy texture and a rich sweet flavor that’s typically indicative of brioche … a beautifully deeply browned brioche with a lovely texture, flavor and just enough heft to give the burger the support it needs.

I was curious about it, so I did reach out to Fontelle's to ask about the buns. Turns out they are, indeed, brioche buns sourced from Golden Home Bakery in Appleton.

The burger itself was irregularly shaped with the tell-tale rough edges of a classic smash burger. The beef was nicely seasoned and slightly crisp on edges with a good level of greasiness. Texturally, it was tender; and it had an appropriate amount of beefy flavor. It was well sized for the bun and in balance with the toppings. Overall, a good burger.

Sure, this seems an unusual combination of ingredients to adorn a burger. But believe me when I say that it works.

In fact, it works in a way that completely surprised me. I’m typically a fan of minimalism, especially with a smash burger. I want a good, crisp edged burger that’s nicely seasoned, topped with American cheese, maybe onions and a good pickle. I want fat, umami, salt and a pop of acid all wrapped up in a soft, tasty bun.

This burger has more (and different) ingredients. But it does exactly that. The cheese is nicely melted over the craggy burger. The kimchi is caramelized, which softened the pungent flavor a bit; but still allowed it to retain a bit of crunch. And the egg … well, the egg took me by surprise.

The egg-on-a-burger concept isn’t my go-to. But I order one one occasionally, since the rich egg yolk can be a really nice asset to an otherwise good burger.

I wasn’t sure how this one would play out; but it could well be one of the best examples I’ve come across of successful use of an egg on a burger. The egg itself was perfectly cooked. The white of the egg was soft, yet fully cooked (I can’t abide slimy, undercooked whites) and the yolk was creamy and runny with a rich, eggy flavor that spread gloriously over the

As for gochujang, if you’ve never had it, you can think of it as Sriracha’s far more interesting cousin. It’s spicy – but not overwhelmingly so – and its flavor is complex, earthy, a bit sweet and blessed with a rich umami that Sriracha simply doesn’t have. On this particular burger, it boosts the burger’s flavor. It counters the richness of the egg yolk, enhances the creaminess of the cheese and it backs up the subtle pickliness of the kimchi like a champ.

There’s quite a bit that goes into this burger, from the adept cooking of the egg, to the quality of the ingredients and the attention paid to balancing the flavors. So it’s a fair value at $10.

The Rising Sun Burger might seem like a step outside the usual burger comfort zone; but, if you love an umami-packed burger with the richness imparted by a well cooked egg, you’ll want to give it a try.