On the Burger Trail: The Foolery at Foolery's Liquid Therapy

This monster burger had to have been a good seven or eight inches tall. Skewered with a pick to ensure that it wouldn't topple, it showcased a mean pile of crisp onion strings, a good amount of melted cheese and a fried egg that obscured the burger entirely.

Since starting the Burger Trail series, I’ve gotten a slew of recommendations from folks who’ve suggested I try out one of the burgers at Foolery’s. One came from OnMilwaukee reader Kim Stark who noted in an email: "Should definitely check out the burgers at Foolery’s Liquid Therapy in Oconomowoc. Choice of Angus, bison or Scottish Highlander – all half-pound burgers with beautiful presentations!"

I'll admit I was a bit disappointed I didn’t get around to making the trek to Lake Country while the weather was still nicer. After all, this lakeside bar is a no-brainer during the summer months during which its spacious deck patio provides the perfect spot for soaking up some sunshine along with views Okauchee Lake. 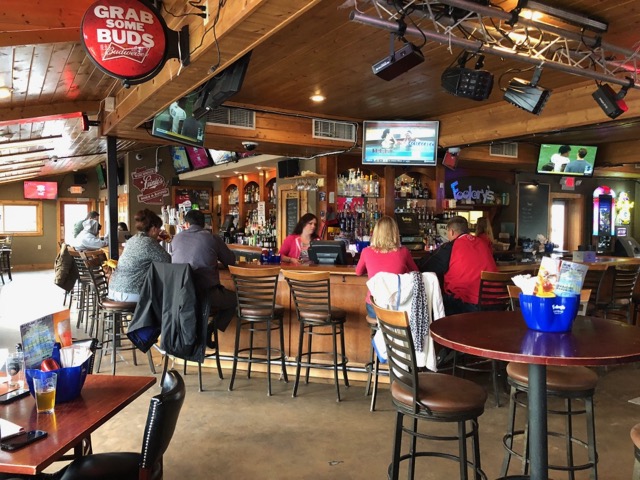 But, as I found on my latest visit, Foolery’s offers a friendly environment and lovely window-side views for the taking all year round. We visited on a relatively busy Saturday afternoon just after the lunch rush and the bar still contained a nice mix of folks, from young families and couples to groups of guys looking for a spot to grab a beer.

I waded through the numerous burger options on the menu before deciding I should really try the bar’s namesake burger: The Foolery, which includes protein of your choice (Black Angus, locally raised Scottish Highlander beef or Duroc pork for $2 extra, chicken or bison) topped with American, Swiss and cheddar cheese, garlic mushrooms, caramelized onions, a fried egg and haystack onions on brioche with a side of J-1 steak sauce ($14).

This monster burger had to have been a good seven or eight inches tall. Skewered with a pick to ensure that it wouldn’t topple, it showcased a mean pile of crisp onion strings, a good amount of melted cheese and a fried egg that obscured the burger entirely. The sight was impressive, though it did make me wonder for a moment what I’d gotten myself into.

The brioche was as it should be: soft and golden with a nice sheen and a subtle, sweet flavor. It was a fair choice for the burger, and managed to hold up to all the toppings including the creamy, runny egg yolk which would have rendered a lesser bun downright soggy.

I chose to try the Scottish Highland beef, which was noted in the menu as being raised by the owners at 5 A Farms in the Town of Erin. Known for being tender and flavorful, Highland beef is lower in both fat and cholesterol than traditional beef and higher in both protein and iron. So, I was curious to see if I’d be able to tell the difference between this beef and Black Angus, which has grown to be a standard for many restaurant burgers. As it turns out, I could.

I ordered mine medium rare – which is my usual M.O., but also the temperature recommended by the kitchen – and it arrived at the table perfectly cooked. The beef was notably less fatty than many burgers, so it wasn’t at all greasy, but it was full flavored and beefy, needing very little seasoning to make it shine. As for texture, it was packed a bit tighter than some and it wasn’t overtly juicy. However, I was pleased to note that it wasn’t dry either. That said, I could see how cooking it beyond mid-rare would likely have wreaked havoc on the burger.

The first thing I did after surveying the burger was to remove the pick and compress it to make sure it was all going to fit into my mouth. Of course, that meant I punctured the fried egg’s yolk, which then streamed down over the burger, coating everything in rich golden goodness.

The burger was plenty cheesy, and I appreciated the flavor from all three varieties: the melty American, the mild cheddar and the nutty Swiss all playing a role. Meanwhile, the haystack onion strings were mightily crisp, so they added a nice oniony crunch to every bite, an element I really appreciated. And the egg yolk added depth and richness to an already tasty compilation.

On the other side of things, I was disappointed by the garlic mushrooms, which were tasty but few and far between. And those "caramelized onions" ... well, they weren't caramelized at all. They were fried and not even to a dark golden brown. That was a shame, as they would've added a nice umami-filled sweetness to the mix.

I ate about half the burger without it, but I would recommend spreading a bit of the J-1 steak sauce (essentially ketchup jazzed up with steak sauce) on the burger. It offered a really nice tang and rounded out the flavors nicely.

At $16, this is one of the pricier burgers I’ve tried on the trail. And it wasn’t perfect, by any means. But, all things considered, it was a satisfyingly above-average bar burger. Part of its value also lies in the beef itself – which was not only meaty and flavorful, but also locally sourced and harvested from cattle that are highly valued for their lean, well-marbled meat. It's definitely a sustainable option that serves to set Foolery's apart from the crowd. In the end, I'd consider it well worth the $2 up-charge.

Although a bit unwieldy (thanks to its pile of toppings) and a bit pricier than average, The Foolery was a burger worth eating. Potentially even more than once.