On the Burger Trail: The Foxfire Burger

If you value a burger by how much gustatory satisfaction it brings, Foxfire pretty much hits this one on the head.

Bryan Phillips and Maggie Reid have been serving up a menu of regional and globally-inspired fare (including a smattering of tasty vegetarian and vegan options) – from kimcheese sandwiches to chicken pot pies – from their Foxfire food truck since 2017. Along the way, they’ve built a reputation for stand-out items like their hot fried chicken sandwich (one of the best in the city) and Asian-inspired fried Brussels sprouts.

In addition to roaming about the city during more clement months, the truck has taken up residence inside Hawthorne Coffee Roasters’ South Side shop, where they’re serving customers a mix of sandwiches, sides and specials Wednesday through Saturday. 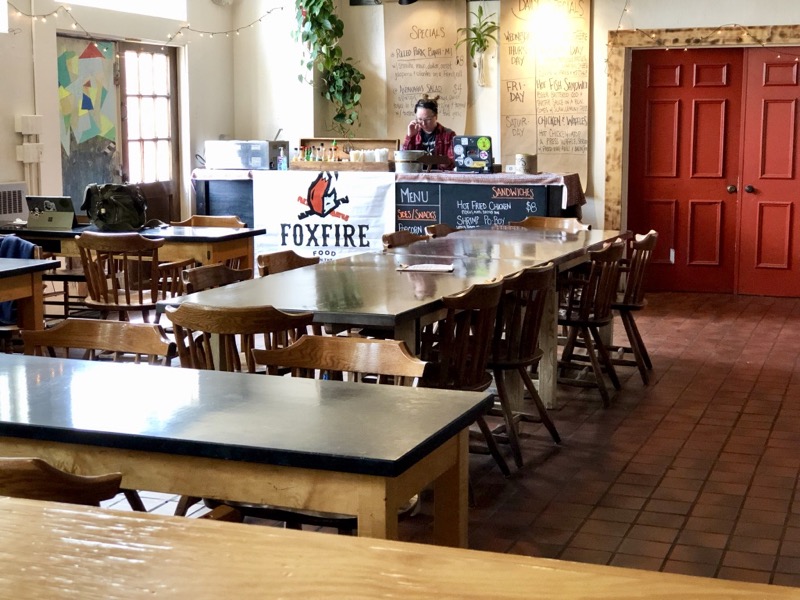 In addition to a regular menu, Foxfire offers a variety of daily specials, including burgers on Thursdays, hot fish sandwiches on Fridays and hot chicken with Press waffles on Saturdays.

All the specials are as rare and lovely as foxfire itself. But the burger might stand out most of all. It’s a delicious thing, and it’s possible it’s even more so due to its relatively rarity.

Side note: I don't typically weigh in on the French fries; but if I did, these crisp, salty McDonald's-like masterpieces would be listed among some of the best I've encountered.

There’s little to criticize in terms of this burger’s appearance. A soft shapely bun cradles the two beefy patties, which peek out from beneath a cloak of deliciously melted cheese. The cheese – of which there is plenty, traps the occasional thin slice of onion and offers color contrast for the layer of thinly sliced green pickles. Bonus: the aroma that emanates from this meaty burger is just as spectacular as its appearance.

This soft bun is as classic as they come. It’s soft and sweet with just enough oomph to support two decently sized beef patties. Any good burger starts with a toasted buttered bun, and this one is no exception.

Great beef is at the heart of every stellar burger. And yes, the blend of beef matters. The Foxfire burger boasts two four-ounce patties of freshly ground brisket, giving them a rich, full flavor and beautiful texture.

The hand-shaped patties are notably seasoned and beautifully seared, giving them both fantastic flavor and a bit of crispness around their edges. Inside, the beef is juicy and pleasantly greasy – enough so that you’re sure to need a napkin at some point along the way.

Basic burgers are trickier than flashy loaded-down burgers because there’s far less to hide behind. Each ingredient needs to play a role, and the flavors need to balance. That’s precisely the case here. American cheese melts beautifully, filling in the crevices of the burger patties and coating every bite with plenty of salty umami. Thinly sliced onions offer more of the same, along with sweet sharp notes that complement both the meat and the cheese. Meanwhile, thinly sliced pickles offer bright notes that cut through all the burger’s richness.

It’s tough to argue with a $10-ish burger. If you value a burger by how much gustatory satisfaction it brings, Foxfire pretty much hits this one on the head.

The best burgers don’t need frills to make them shine. Such is the case with the double brisket burger from Foxfire. The fact that it’s only available for six hours once a week makes the mystique of this burger even more sweet.