On the Burger Trail: The Fritzburger at Fritz's Pub

As of the writing of this article, there are exactly 24 more Fridays to enjoy Fritz's famous fish fry and just about 308 business hours to get one of their famous Serbian Fritzburgers. So we decided to get a jump on that.


There are just a handful of restaurants and bars in Milwaukee that are keeping the city's Serbian heritage alive. Among them is Fritz’s Pub, where Steve, Maria and Joe Djuric are carrying on the legacy their father Dragoslav (Fritz) began in 1978.

Fritz's is your quintessential South Side hole in the wall. It's dark and cozy with a horseshoe-shaped bar, plenty of mirrored beer signs, Tiffany-style lamps and a friendly crowd that gathers eagerly for lunch on Fridays. Many are there for the fabled fish fry (while we sat at the bar, they were whipping up the beer batter with a unique blend of tap beer). Others ordered up bureks, and still more (like us) were eagerly waiting for a Fritzburger. 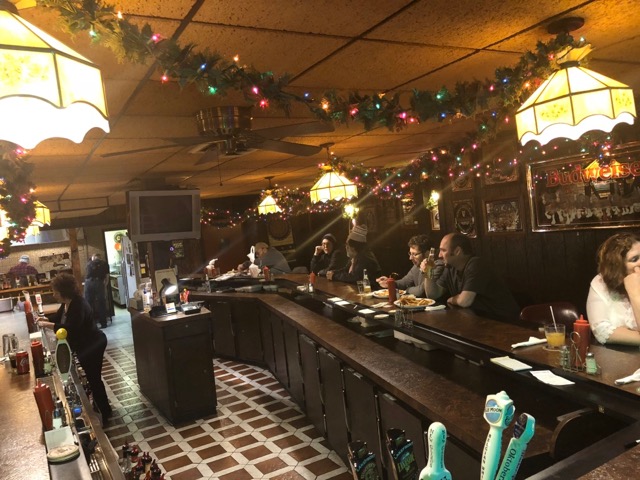 Despite its popularity, particularly on Fridays, Fritz's nearly 40-year legacy will be coming to an end this September when the family plans to officially retire from the bar and restaurant business. It’s a message the family relayed on Facebook in May of 2016 (with a good deal of levity, I might add). 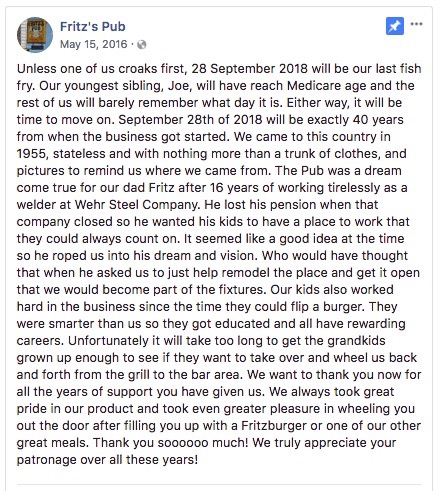 The fact is that Sept. 28 is getting closer by the day. As of the writing of this article, there are exactly 24 more Fridays to enjoy Fritz’s famous fish fry and just about 308 business hours to get one of their famous Serbian Fritzburgers. So we decided to get a jump on that.

The Fritzburger is composed of a half pound of ground veal and beef blended with onions, paprika and, according to the menu, "other Serbian ingredients." It’s served with a wedge of feta cheese, pepperoncini peppers, pickles, a hefty slice of butter-toasted French bread and a side of crinkle cut French fries ($8.50). You’ll also be asked if you’d like fried onions, raw onions or both.

As I contemplated my thoughts on the presentation of the Fritzburger, it occurred to me that its simultaneously old-school and modern. The burger comes "deconstructed" (so to speak), with the burger conspicuously separate from most of the toppings. In my case, the burger was topped with fried onions and flanked by a dill pickle, pepperoncini and a slab of feta cheese. Waiting in the background was a nicely buttered and toasted section of sesame-seeded Italian bread (they say French, I say Italian…). The plate looked just fine, but it was the smell wafting up to my nostrils that made my salivary glands quicken with joy.

The bread was downright delicious. It was buttery, it was crisp and it had just the right amount of toothiness to give it some heft without making it impossible to bite through. It also made one heckofa bun for the burger (and yes, I do recommend you eat it as a complete package).

Don't expect anyone to ask how you'd like your burger cooked. It's not gonna happen. After all, this burger is really a sausage patty made from beef, veal and a complex and delicious combination of spices. Based on Balkan ćevapčići (roughly pronounced chay-VOP-cheechee), Fritz's also offers the traditional uncased sausage in its more traditional form (look for a shortened moniker, chewaps, on the menu).

In this case, the sausage patty is toothy and tasty, with a fair amount of salt and an undeniably savory taste. And, while delicious on its own, it’s phenomenal when eaten on the provided bread with a bit of feta crumbled on top and liberal bites of pepperoncini (which provides a welcome bit of acid to cut the richness) consumed in between each bite.

The fried onions are both savory and sweet. The sweetness comes from the onions themselves, and the savory element is underscored by what I suspect is a bit of beef bouillon or stock, which offers them a meatiness they wouldn’t have on their own. Meanwhile, the feta is tangy and salty, and the peppers slightly spicy and pickley. Together, they offer a balanced trio of flavors that are unlike what you’re likely to find on almost any other burger in the city.

For just over $8, Fritz’s offers a hearty meal that’s well worth its price. It’s warm and savory and comforting, and it’s a unique take on Old World cuisine that you just can’t find many places anymore.

If you haven’t had a Fritzburger, it’s high time you tried one. After all, you’ve got a limited amount of time to enjoy this laid back take on an Old World favorite.

On the Burger Trail: The Tavern Burger at Buckatabon

On the Burger Trail: The Double Simple Smash Burger at Pete's Pub

On the Burger Trail Special Edition: The double burger at Dairyland