On the Burger Trail: The I'm So Stuffed Burger at Golden Nest Pancakes & Cafe

... a review in which the burger turns out to be even better than its menu description might suggest.

Golden Nest Pancakes & Cafe is among the area’s newest restaurants, having opened on the West Side in August. The restaurant, which focuses on breakfast and brunch, offers a large menu of options ranging from classic breakfast dishes (think omelettes,  Benedicts, waffles and French toast) to skillets, chilaquiles and their special secret recipe pancakes along with coffee, tea and a full complement of brunch drinks.

I opted for the I’m So Stuffed Burger, a burger for which the menu description reads: Half pound char-grilled beef patty stuffed with balsamic glazed mushrooms, and mozzarella cheese with cherrywood smoked bacon and topped with garlic aioli ($13). Burgers are served on brioche buns with guests’ choice of French fries or fresh greens. Sweet potato fries can be substituted for $1 more. 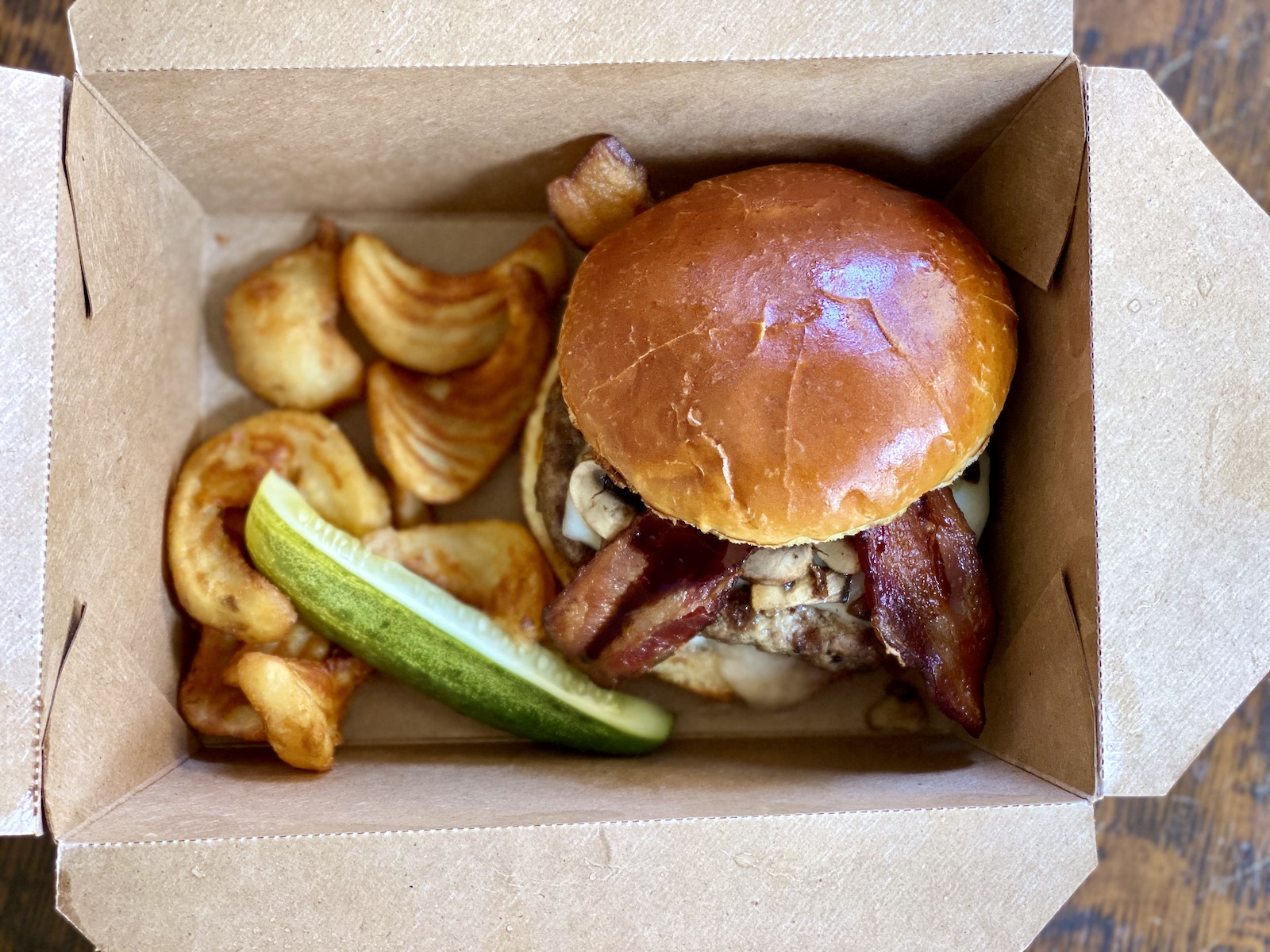 The burger came packaged in a wax coated take-out box, which seemed to work just fine for the relatively short (10 min.) jaunt back to my house. The burger unpacked beautifully, showcasing all the layers of toppings fairly notably, from the overstuffed burger from which mozzarella cheese oozed to the extra melted cheese and sauteed mushrooms piled on top of the burger and – finally – the mouthwateringly beautiful bacon from which slow-moving balsamic glaze occasionally dripped.

The brioche was fresh, soft and slightly sweet. It had been toasted nicely, leaving the cut sides of the bun toasted and crisp (enough to offer a subtle crunch with some bites). In terms of flavor, the slight sweetness paired well with the savory burger and its toppings, and it was appropriately sized for the half-pound patty. Even better, it held up well throughout the eating process.

I didn’t know going in if this would actually be a stuffed patty or not. The name and menu description suggested that it would be. However, when I saw the burger topped with mozzarella and mushrooms, I wasn’t sure if it would also be packed with more cheese and mushrooms inside. But, it was.

The burger itself was hand-pattied, giving it a slightly irregular shape and a nice loose pack that kept it juicy, even though it was cooked through. The exterior was beautifully caramelized and the meat itself was cooked probably right around medium based on both the  texture and the occasional pop of taupe-pink color.

It was nicely filled (with mostly mozzarella), though there were a few mushrooms that appeared here and there. They weren’t “balsamic glazed” as the description indicated, but instead just cooked… likely added fresh and steamed in the center of the patty with the melted cheese.

The meat itself had good flavor and a pleasant juiciness, likely assisted by the cheese and mushrooms within. That said, judging from the state of my dining companion’s burger (which was cooked to well done and far less pleasant), there might still be some lingering issues with consistency among the Golden Nest’s relatively new kitchen staff.

Despite the menu’s description, neither the mushrooms inside the burger, nor those on top of the burger were glazed with balsamic vinegar. The mushrooms inside were steamed. The mushrooms on top were nicely sauteed. The balsamic glaze, meannwhile, was drizzled over the top of both the mushrooms and bacon. Honestly, that seemed for the best. The mushrooms still maintained their texture and earthy flavor, an element I’m afraid would have been lost if cooked at any length with the vinegar. Instead, it was complemented by the umami-sweet flavor of the glaze itself.

The bacon, which was cooked to a perfect crispness, also played well with the balsamic glaze, as it underscored the sweet smokiness. And then there was the garlic aioli, which swooped in and rounded out all of the flavors quite nicely.

In terms of value, this half-pounder lived up to its side of the bargain with good quality ingredients, a nice flavor profile and a side of fries to boot.

The I’m So Stuffed Burger was a delightful surprise of a burger that I’d gladly eat again.

On the Burger Trail: The Three Cheeseburger at Sweet Diner