On the Burger Trail: The Breakfast Burger at Hacienda Beer Co.

The menu at Hacienda Beer Co. not only features a fun, ever-changing selection of beer, but also a variety of Mexican inspired plates from burritos and bocadillos to tostadas and snackable items like bean dip and loaded fries. And yes, there are burgers.


Every time I walk into Hacienda Beer Co., it brings me a little bit of joy. It’s so beautiful and bright, and it’s filled with a great energy that is difficult to explain. Thanks to the gorgeous green and orange accents and the light pouring in from those gorgeous tall windows, I’ve begun to have a difficult time picturing what the place looked like as the former BBC.

I’ve also had a great time poking through the menu, which not only features a fun, ever-changing selection of beer, but also a variety of Mexican-inspired plates from burritos and bocadillos to tostadas and snackable items like bean dip and loaded fries. Brunch dishes include Mexican inspired Benedicts, a fritatta, biscuits and gravy and sweets like churro French toast.

Among the items I hadn’t tried until more recently were the burgers. On the dinner menu, Hacienda offers an Impossible Burger (topped with vegan or American cheese, arugula, cilantro pesto and pice de gallo) along with a Burger of the Month. 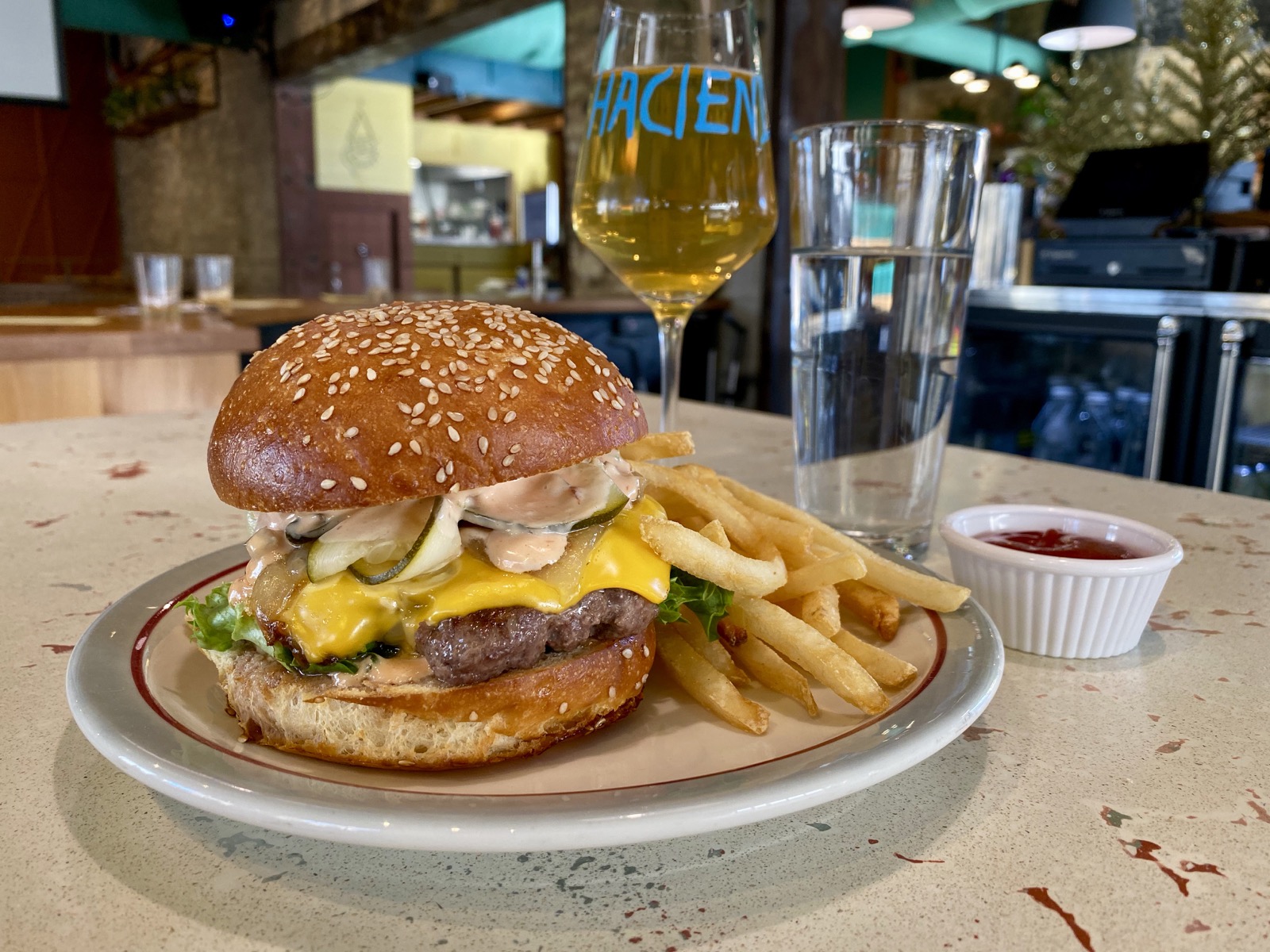 The Breakfast Burger, which is the subject of my review, features chorizo ground chuck, fried egg, smoked bacon, chihuahua cheese, arugula tossed in cilantro lime dressing ($13; add avocado for an extra $2). The burger is served with a side of crisp breakfast potatoes.

The Breakfast Burger is a pretty one. It showcases a gorgeous glossy seeded bun, which was shapely and near-perfect looking tipped off to the side of the burger. And the layers of color beneath (from the deeply colored burger patty to the fresh mixed greens and stark white egg) just added to the anticipation of how the flavors would come together.

The seeded bun was beautiful and soft; yet it possessed a nice heft and a clean flavor that played well with the ingredients without upstaging them. The cut edges were nicely toasted to a mottled brown color, and the bun did a fine job absorbing the juices from the burger. Overall, a big win.

I try my best to judge each burger on its own merits, so I consciously try not compare one to another. But – after eating as many burgers as I have – I’ve been a bit spoiled by the brisket burgers of the world, which offer a robust, meaty flavor every time.

But this burger – which I’d guess probably weighed in at about one-third of a pound – offered me a reminder of why so many people used to build their burgers with beef chuck. The fat content in the hand-formed patty kept it plenty juicy, despite the fact that it was cooked beyond the medium mark. I cut into it and the juices flowed, intermingling with drips of rich, soft egg yolk.

When tasted alone, the beef didn’t have the pronounced beefiness I would expect. My guess is that the chorizo seasoning – although it wasn’t pronounced – is what made the flavor seem unfamiliar. The burger was nicely seasoned on the exterior, so it definitely wasn’t bland; but I had a tough time putting my finger on the flavor. The texture on it was good (it had been loosely packed and didn’t seem to have been overworked) and the exterior was well browned, with an almost char-broiled flavor.

When consumed together with the toppings, the burger worked. But on its own, it baffled me a bit.

As for the toppings, they were on par. The Chihuahua cheese was nicely melted and offered a mild saltiness. The bacon was tasty and nicely crisped and the over-easy egg was well cooked, with just enough soft yolk to offer a bit of drippy richness to the burger.

The mixed greens (which is what was on my burger, rather than arugula) offered a bit of freshness and a slight pop of acid. They did wilt quickly, but their flavor was a nice addition. I didn’t order the avocado, but I’d imagine it to be a nice addition.

At $13, this burger falls in the average range for restaurant burgers; and I didn’t feel cheated after enjoying it. The bun was high quality and the toppings fresh and nicely balanced. Overall a solid value.

If your idea of the ideal brunch is a burger and a brew, count Hacienda among your spots to try.