This week, the burger trail led us to the East Side where we made a stop at Hooligan's Super Bar, a cornerstone of Milwaukee's East Side since 1936 ... and, as it turns out, a pretty fair spot to get satiation for the occasional burger craving.

This week, the burger trail led us to the East Side where we made a stop at Hooligan’s Super Bar.

Since 1936, Hooligan’s has been a cornerstone of the East Side. Over the decades, it survived three ownership transitions, with one of the longest runs by John and Cindy Sidoff who took over the bar in 1980. Under their oversight, the "nickel beer and quarter shot" bar was reinvigorated with additions like live music, trivia and an expansive bar menu. In 2013, Sidoff passed the torch to his long-time general manager Mark Buesing, an employee of 15 years who got his start as the bar’s dishwasher.

An element some might find interesting is the origin of the name Hooligan’s "Super Bar," which is derived from a long tradition of bars at which customers could both drink on premise or take their beer, liquor or wine to go (a loose reference to the word supermarket). Most super bars opened early, some at 6 a.m. and closed at midnight. 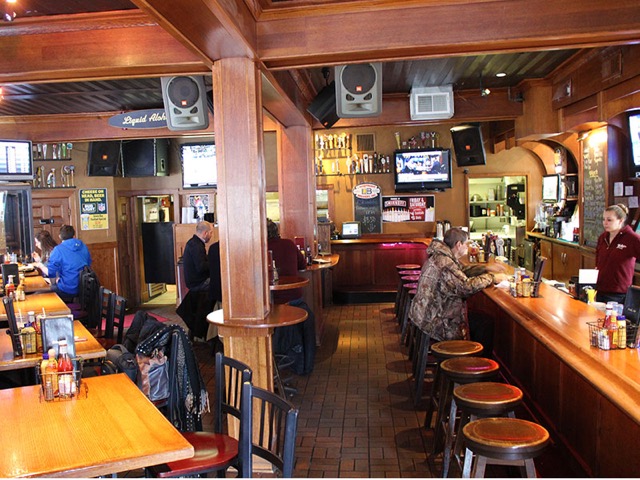 But when we visited, it was for a burger. I ordered up the bar’s best-selling Hooli-Burger, which is topped with melted cheddar cheese, bacon, barbecue sauce, mayonnaise, olives, lettuce and tomato. It comes with a choice of sides for $11.

Like most bar burgers, the Hooli’s presentation was no frills. The burger arrived in a basket alongside a generous serving of crisp fries. It was cut in half lengthwise, with each half secured with a wooden skewer that kept all the toppings under control.

The Hooligan’s bun is a sturdy affair. It was a bit softer than a classic hard roll, but possessed a similar chewy exterior. Dappled with sesame seeds, it was a bit dry on its own. However, it made the perfect receptacle for absorbing and holding up (for the most part) against the juices from the burger and its toppings. Even the lower half of the bun grew only vaguely soggy by the end of our meal.

I ordered my burger medium-rare, and Hooligan’s gets points for ensuring that it was delivered to my table just as ordered. The patty was firmly packed, giving it a fairly dense texture. It was fairly lightly seasoned; however it exhibited a moderately smoky flavor from the grilling process.

Olives, barbecue sauce and mayo? I found myself wondering who imagined up such an interesting combination of ingredients. But, as I bit into the burger, I was pleasantly surprised by how the flavors worked together. Simultaneously sweet and salty, the briny olives offered up a nice umami, while the crisp bacon offered a counter-texture to the soft, barely melted cheese and olives. It was good.

At $11, the Hooligan’s burger is a relatively average priced burger. It’s a decent quality for the price, and – particularly with the included side – it makes for a satisfying meal.

If you happen to be on the East Side and find yourself growing hungry for a burger, Hooligan’s is a fine spot to satiate your craving.