On the Burger Trail: The Gorgie Burger at Jackson's Blue Ribbon Pub

The Gorgie Burger is a lovely thing, with its glossy bun and charred patty, topped off with a fresh green mound of arugula, a swath of drippy aioli and the prettiest of pink pickled onions.

It’s worth your while to take a trek over to the former Pabst Brewing Complex to see all the cool stuff that’s brewing. Among the worthwhile places to visit is Jackson’s Blue Ribbon Pub, the restaurant accompaniment for the Brewhouse Inn & Suites.

But don’t let "hotel restaurant" scare you. This is a well appointed pub with an accessible, casual menu. Even though the newness of this venue, which opened in 2013, has worn off a bit, you’ll also find a beautifully appointed bar with lovely details like decorative tin panels, rustic wood details, high ceilings and beautiful, comfortable blue booths. There’s also a great patio for enjoying during the summer months. 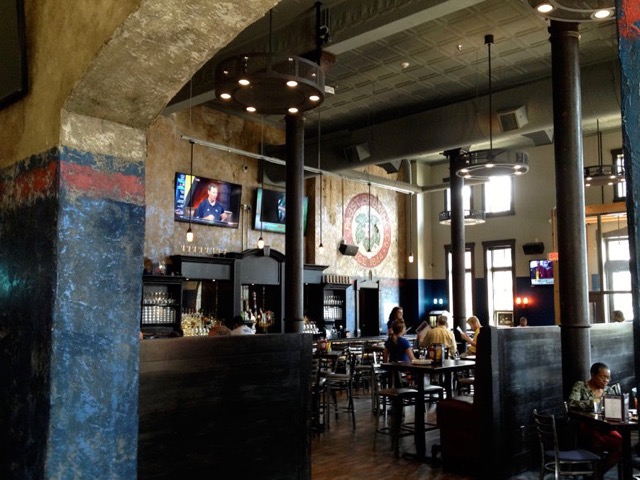 In terms of burgers, you have three choices at Jackson’s. You can build your own burger. You can order their veggie burger. Or you can order The Gorgie Burger. I opted for The Gorgie which features a half-pound Angus patty topped with gorgonzola aioli, bacon, cracked-pepper pickled red onion and lemon feta infused arugula ($13).

Pro tip: When you go, park in the garage on 9th street between Juneau Avenue and Winnebago Street. The rate is just $1 an hour, which is cheaper than the meters on the street.

The Gorgie Burger is a lovely thing, with its glossy bun and charred patty, topped off with a fresh green mound of arugula, a swath of drippy aioli and the prettiest of pink pickled onions. I found myself thinking, "Yeah, I wanna eat that."

The brioche bun had a lovely glossy exterior, a pillowy soft texture and a nice heft, giving it enough weight to stand up against a juicy burger and toppings. If there was any fault to be found, it was in the bun’s toasting, which was only apparent along the edges of the bun and not in the middle.

This was a delicious burger. At Jackson’s, they make burgers to order. Mine came perfectly cooked (medium rare) with a beautifully pink interior and a very nice char on the exterior that not only added a nice texture, but flavor too. The meat was juicy and beefy with a sufficiently loose pack. Lovely.

The toppings were beautiful and fresh with a lemony tang that not only offset the fattiness of the meat, but also made me think (happily) of spring. There was a light peppery kick from the arugula and a burst of salt and lemon from the dressing. The sourness from the pickled onions was set off nicely against the sweetness of the brioche.

The one fault I found – particularly as a lover of blue cheese – was that the gorgonzola aioli was almost completely lost in the shuffle. You could see it. It was there, but any semblance of blue was lost against the bright, fresh flavors.

On the other hand, I’m a big fan of cheese on burgers, and I didn’t really miss it here … which says something.

This burger was delicious. The ingredients were fresh and the burger was well-prepared. So $13 was definitely fair. In fact, it made for a delicious lunch at a relatively average price.

If you’re craving the flavors of spring, it’s time for a Gorgie Burger.