On the Burger Trail: Jake's Burger

Lori Fredrich has fond memories of a burger she ate years ago at Jake's Restaurant on North Avenue in Wauwatosa. But would the signature burger at the newer Jake's Burger in Brookfield meet muster? She had to find out.

I recall eating a burger years ago at Jake’s Restaurant on North Avenue in Wauwatosa. It was almost two decades ago (it had to have been, since the location closed in 2000). But, I still remember how juicy it was, and how it tasted of steak. I also remember (maybe even more vividly) the side of wispy fried shoestring onions, the caliber of which onion ring dreams are made. At the time, I had no idea that the late Jacob Replogle got his start running a little mobile burger joint called the Huddle, and I had no idea that I’d be reviewing a burger from his son’s restaurant over twenty years later.

But so it goes. Today, Repogle’s son Jake and his wife Karen run the Brookfield restaurant (where you still can order a burger), along with Jake’s Burger, a casual burger-focused joint located in a bromidic suburban strip mall. 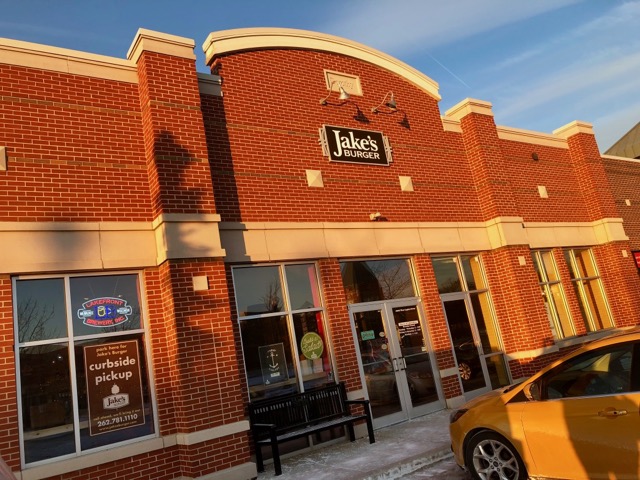 As you might expect, the menu contains a host of burgers. There are classics like the mushroom and Swiss along with fancy-pants burgers like the truffle burger with melted brie, truffle oil, balsamic vinaigrette and arugula. All are served a la carte and priced $8.95 to $13.50. Turkey, falafel or grassfed beef burgers are also available for an upcharge ($3.90); gluten-free buns will set you back by an extra $1. Single orders of sides include haystack onions, coleslaw and both regular and sweet potato fries, priced $2.99 to $5.99.

I opted for the restaurant’s namesake: the Jake’s Burger. It comes with a half-pound custom blended beef patty, cheddar cheese, oven roasted tomato, butter lettuce, haystack onion rings and special sauce for $12.95. My dining companion and I also ordered a side of cheese curds ($6.50), which were worthy of a trip back to the restaurant all on their own (the peppercorn dipping sauce is a particular draw).

Jake’s Burger was piled high with toppings. It was a masterpiece of both height and color that made me wonder if I was actually going to be able to fit it into my mouth. A skewer held everything together (a smart move, in this case). And it was topped off with a crisp housemade pickle that was pretty delicious in its own right.

The seeded brioche bun on the Jake’s Burger was pleasantly sweet and yeasty in terms of flavor and nicely sized for holding a half-pound of beef. It's texture was soft with a nice toasted interior, giving it a defensive barrier against the juicy burger and offering a notable crunch of texture.

It’s noted on the menu that all of Jake’s burgers are cooked to medium; however, you can definitely make a request that your burger be cooked to order. I requested that mine be cooked mid-rare, and that’s exactly how it came to the table. It was one of the most perfectly cooked burgers I’ve had in a while.

The meat itself -- a custom grind of short rib, brisket and sirloin – was well-seasoned; it wasn’t overtly salty, but there was enough salt to bring out the best qualities of the meat. The half-pound Jake’s burger was juicy and meaty with a flavor not unlike a good steak. Texturally, it was fairly loosely packed and tender with a nice crust on the exterior. Most importantly it tasted great on its own: the mark of a truly great burger.

The toppings were a good match for the stellar meat. In fact, I could have easily given them a "10" if they hadn't made the burger a bit too unwieldy to eat (see below).

The cheddar cheese was well-melted and there was enough of it that the flavor didn't get lost beneath the other ingredients. The oven roasted tomatoes were tasty and plentiful, adding both a touch of sweetness and a bit of acid. They brought additional moisture to the burger (maybe a bit too much, as they were the culprit that made the toppings a bit slippery and difficult to keep intact); however, I liked them quite a bit. They effectively eliminated the need for ketchup while aptly solving the problem of the winter (read: unripe) tomato.

Meanwhile, a generous helping of Jake’s famous onion strings offered plenty of texture, along with a pleasantly sweet onion flavor. For me, they also conjured up a bit of nostalgia for those famous fried onions that perfumed the neighborhood along North Avenue when I lived there in the late 1990s. They were a great match for the signature sauce, which was sweet and not unlike Thousand Island dressing. The addition which probably offered up the least was the butter lettuce. I appreciated that it was fresh and green, and it looked gorgeous with its edges poking from the sides of the sandwich; but the butter lettuce leaves are thin, and in the end it added little more than a splash of color.

When a burger is good, it’s good. And while some might complain about a $12.95 price tag, I’ve had numerous burgers at the same price that didn’t even come close in terms of flavor. So I’m giving Jake’s credit where credit is due.

Don’t be fooled by its strip-mall location. If you love a well-cooked burger with toppings to match, you’ll find it at Jake’s Burger.