On the Burger Trail: The Joe Mama burger at Joe Mama's Bar & Grill in Colgate

Inspired by numerous mouth-watering burger photos from Joe Mama's in her Instagram feed, Lori Fredrich decided to push this destination burger closer to the top of her list.

My trip to Joe Mama’s was prompted by the sight of numerous mouth-watering burger photos, most of which have graced my Instagram feed over the past few weeks. Each photo seemed to be accompanied by a corresponding rave … about the food, about the service, about the overall Joe Mama’s experience. So I made it a point to move this destination burger spot closer to the top of my list.

Joe Mama’s is a clean, quaint tavern with a fun, welcoming vibe that seems to attract a nice mix of regulars, families and curious newcomers. In addition to an expansive bar, it sports a large dining room with a mix of high- and low-top tables, bright windows and a number of large flat-screen televisions. Outside, there’s both porchside seating and a well-appointed patio, along with room for volleyball, cornhole and bags tournaments. 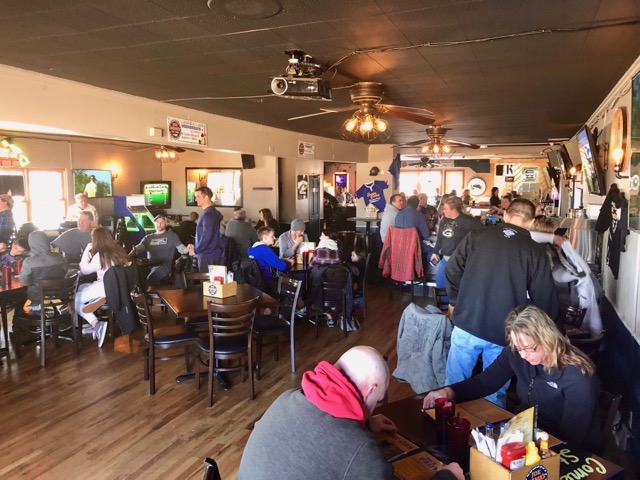 As for the eats, Joe Mama’s is well known for its baked macaroni and cheese, which contains American, cheddar, cheddar jack, parmesan and pecorino romano. It’s also available as buffalo chicken mac, pulled pork mac or reuben mac, as well as a rotating mac of the day.

So it only made sense to order the namesake burger – the Joe Mama – which features a half-pound Black Angus burger topped with American, cheddar, pepper jack and nacho cheeses, applewood smoked bacon and served on a handmade crispy mac and cheese bun ($14.95). It comes with housemade potato chops, but you can sub them out for tater tots, battered fries, sour cream and chive fries, sweet potato fries or haystacks for an additional $1.95.

I can’t fault this burger for its presentation. It was well-constructed, delicious looking and not-at-all the hot mess it could have been. The mac and cheese bun was fried crisp and golden. There was visibly crisp criss-crossed bacon, mouth-wateringly melted cheese and a lovely cascade of nacho cheese sauce flowing down the side. And, despite the gluttonous amount of cheese, the burger itself wasn’t completely obscured from view.

This is the first burger I’ve reviewed that didn’t have a traditional bun. But, for reviewing purposes, I approached it with the same basic criteria: Does it hold together? Is it flavorful? Does it complement the overall flavor of the burger?

From a flavor perspective the "bun" was pretty delicious. It was flawlessly crisp on the exterior, but still soft and cheesy inside. In fact, initially I thought it might even hold up to being handled similarly to a bun. Unfortunately, that’s the one place it fell short; despite its crispness, the bottom bun failed when I tried to pick it up, making it decisively a knife and fork burger. Honestly, I was at peace with that; but I did feel the need to dock it for its inability to function as a bun.

Pro tip: If you like the idea of mac and cheese on your burger, but you'd prefer something that can actually be eaten out-of-hand, the Mac Attack cheeseburger is a close second to the Joe Mama. It features a half-pound burger topped with macaroni and cheese and bacon ($11.95), and it’s also pretty darned good.

When our server took our orders, she asked us if "medium" was fine for our burgers. I asked if I could get mine medium-rare, and she seemed hesitant. So I decided that, rather than be insistent (and potentially disappointed), I’d just go with the flow.  As it turns out, the burger came out a solid medium, with a nice showing of light pink through its center. Even better, it was juicy and beefy with a nice charred exterior. It was also well-seasoned and tasted just as great on its own as it did in conjunction with the toppings. It was good enough that I almost didn't care that it wasn't my usual mid-rare.

Let’s be clear from the outset: there is very little balance here in terms of flavor. After all, what you’ve got is cheese, cheese and more cheese. However, despite the somewhat one-dimensional ingredient list, there were were notable layers of both flavor and texture to be appreciated.

For instance, there was crispness from the "bun," the nacho cheese added creaminess and the pepperjack definitely contributed a pleasant kick. Meanwhile the bacon was smoky and relatively crisp; it underscored the overall meatiness of the burger and broke up the monotony of the cheese.

I do recommend incorporating the lettuce and tomato which comes alongside the burger; it needed a bit of freshness to keep it from becoming cloyingly rich. And I couldn’t help thinking that some sort of acid – pickles, perhaps – would be a nice addition to cut through the fattiness of all that cheese.

You’ve got to appreciate the ingenuity and craftsmanship of this burger. It’s beefy (and cheesy), and it’s got enough heft that you definitely won’t go away hungry. I had no qualms about spending $14.95 on this over-the-top indulgence.

Not a burger for the faint-hearted, nor the lactose intolerant, the Joe Mama’s burger is a celebration of excess at its finest.