On the Burger Trail: Kewpee Sandwich Shop in Racine

Wisconsin is a treasure trove of quirky one-of-a-kind spots that seem to hail from another era. Among them is Kewpee, a burger joint that truly captures the spirit of a bygone era. And the burgers? Well, they're as classic as they come. Delicious, too.

Wisconsin is a treasure trove of quirky one-of-a-kind spots that seem to hail from another era. Among them is Kewpee, a burger joint that truly captures the spirit of a bygone era.

Kewpee is one of the oldest hamburger franchises in the country. Founded in Flint, Michigan in 1923, there were once hundreds of Kewpee locations around the states. Today, just a handful remain, including one in Racine. Opened in 1926, the Racine Kewpee has been an institution in the city for nearly 90 years. You can read more in this article by our Molly Snyder. 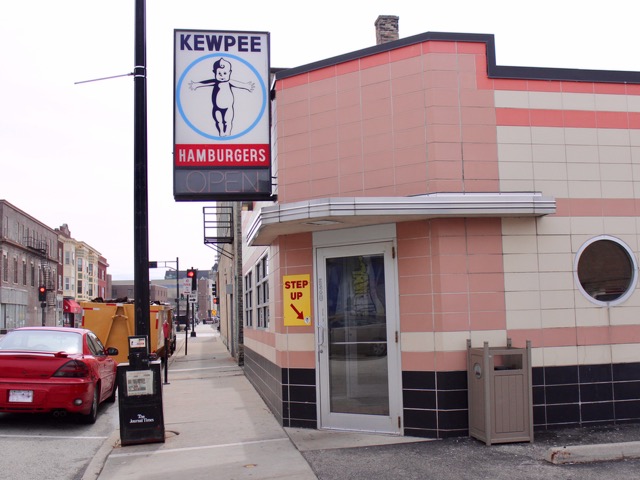 The space itself offers up a healthy dose of art deco design complete with horseshoe-shaped lunch counters, a smattering of tables and plenty of old-school charm. And the menu offerings follow suit. There are burgers, housemade chili, grilled cheese and fish sandwiches, krinkle-cut fries, home-brewed root beer and thick shakes or malts. And the prices are like a blast from the past. 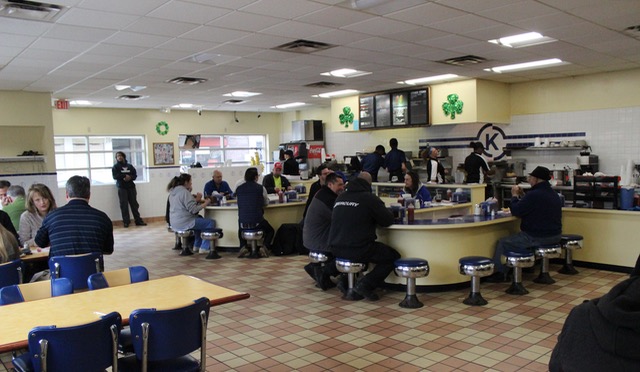 Lest I forget to mention it, there are also hundreds of Kewpie dolls held captive in a large display case on the far side of the restaurant. Creepy or quaint? That’s for you to decide. But, as far as I’m concerned, it’s just plain fun. And so is the restaurant’s tagline, which reads "Hamburg Pickle On Top, Makes Your Heart Go Flippity-Flop!" 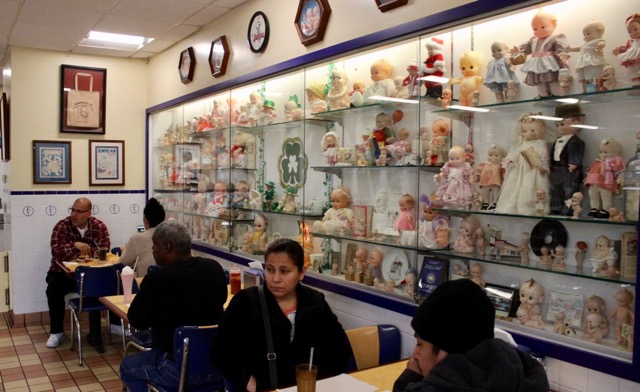 If you're lucky, you'll arrive when the dining room is filled with a diverse group of characters, from grannies and grandkids to men in suits. You might even meet your dining companion's 5th grade art teacher (as I did); and if you're lucky (we were), she might even pay for your lunch.

But, picking up the check at Kewpee isn't a hardship. On my visit, I kept it simple and ordered the cheeseburger with the works ($1.95) and a side of krinkle-cut fries ($1.75). I ordered an iced tea, but you should really get the housemade rootbeer. Lesson learned.

The presentation for Kewpee’s burgers is as classic as they come: smack dab in the center of a small diner plate with a blue and white checkered rim. Fries come in a basket on the side.

It’s soft. It’s spongy. It's glossy and delicately browned. It’s classic. And it might not be super special, but it cradles the burger in its old school arms just as a burger bun should.

There’s no gushing needed. It’s not that Kewpee’s burger isn’t delicious (it is). But, it’s also no frills. The hand-formed ⅙-pound burger patty is made from beef that’s fresh, never frozen. And that shows. The patty was thin, but tender. It wasn’t quite square, but it wasn’t round either. And It was tasty, likely helped by the fact that it was grilled with butter. It’s a great example of the sort of burger any classic burger joint should serve.

If you don’t specify otherwise, your cheeseburger comes topped with American cheese (that's been grilled, ensuring it's melty, melty, melty), pickles, raw onion (don’t even ask for fried; it’s not an option), ketchup and mustard. And that’s just fine. In the end, it delivers the classic burger flavor that everybody wants.

How can you complain about a cheeseburger for $1.95? You really can’t, especially when it’s a solid diner-y Kewpee burger. In fact, you can rejoice. At that price you can afford to order two.

In the end, pay a visit. At Kewpee’s you’ll find a solid, unpretentious burger that’s served up with a smile, and a big fat nod to the past.

On the Burger Trail: The Smoked Brisket Smashburger at Sweet Smoke BBQ

On the Burger Trail: The Crafthouse Cheeseburger at Central Standard

On the Burger Trail: The HotWax Burger at HotWax by Meat & Co.