On the Burger Trail: The cheeseburger at Kitt's Frozen Custard

Kittï¿½TMs is among Milwaukeeï¿½TMs oldest classic custard stands. And they deliver consistently on their custard. But how about their burgers?

Since carry-out is king, and there’s little better than frozen custard during the summer months, I’ll be focusing on "custard stand" burgers for the next few weeks.

I have fond memories of the classic stand, which my family occasionally visited as I was growing up. Those memories mean I’ve continued to patronize the venue, particularly during the summer months when a craving for custard hits. Typically, I opt hot fudge malt (which is made the old fashioned way with good old malt powder), and my husband might grab a sundae. But, I don’t have a recollection of ever stopping there for an actual meal. So, I thought it was time to remedy that. 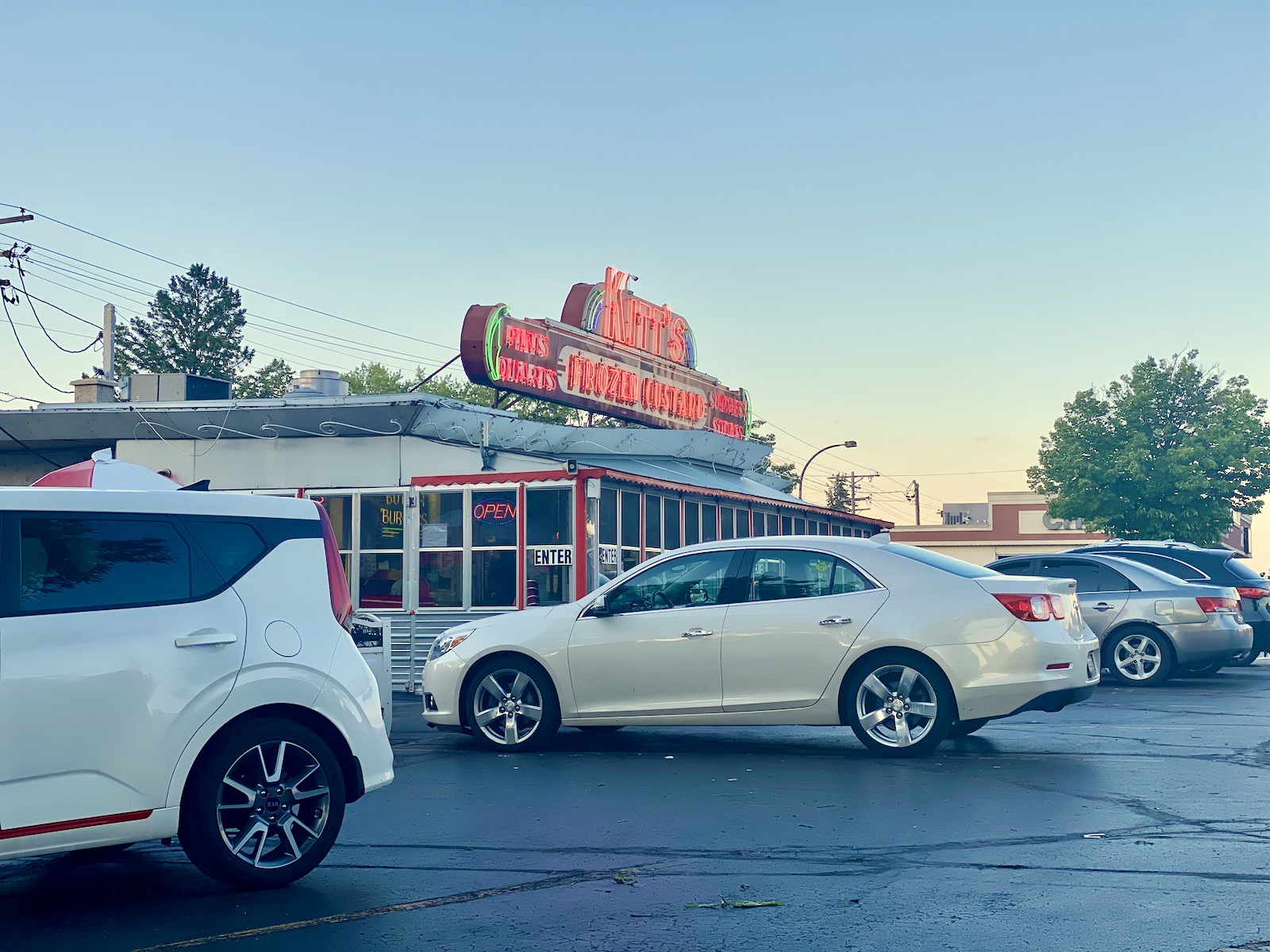 We drove over to Kitt’s on a beautifully summery night, right around 7:30 p.m. The sun was shining. There was a slight breeze. And there were numerous others who thought it was the perfect night to enjoy a burger or some custard on one of the stand’s red picnic tables.

Overall, the burger looked appealing. One of the two burgers we ordered, which ended up on the bottom of the carry-out bag, was pretty smashed. The one I photographed was smashed up on one side, but still pretty appetizing looking. Looking from the side, you can glimpse the thin, browned burger, the swath of ketchup on the bottom bun and a bit of the fried onions peering out. It wasn’t perfect; but it had potential. And I was rooting for this burger. I really was.

I’m not sure what happened to the buns on our cheeseburgers. They appeared to be relatively fresh. In fact, the bottoms of both buns were soft and supple. But the tops were dense and slightly chewy, almost as if they’d been grilled hours ahead and set aside.

As you may have surmised, only the tops of the buns were grilled; they were a nice golden brown on the interior, though they were not at all crisp. The bottom of the buns appeared untouched by heat; they were white on their cut side and far more soft and supple than the top buns.

I doubt most people pull apart their burger just to analyze the appearance, texture and flavor of the patty. But, for the purpose of this series, it's a necessity. In this case, I found a tight patty, the exterior of which was browned and the interior of which was grey and somewhat spongey. Its flavor… was vaguely meaty and slightly salty; but it didn’t have much in the way of true beef flavor. It was also too small for the bun; but I’m not going to split hairs on that point because the burger’s flavor and texture were its biggest issue.

It was edible, but not particularly enjoyable on its own. When I put it back into the bun, it was easier to overlook its strange almost sausage-like texture. But it was difficult to ignore my disappointment that this burger was likely one of the pre-cooked frozen patties that I’ve written about  at a few other junctures on the Burger Trail.

They’re the kind of burgers you can buy pre-packaged at the gas station or purchase in the freezer case at the grocery store. They can be cooked from frozen on a flat-top, baked in an oven or even microwaved; because they’re pre-cooked, they show minimal shrinkage and require minimal skill to reheat, making them a budget choice for high volume operations. And – in an age when beef prices are high – they’re also an obvious way to save money.

Unfortunately, because they are pre-cooked, they possess virtually none of the elements that make eating a burger enjoyable. No inherent juiciness. No beefy flavor or slightly fatty mouthfeel. A bizarre texture. A flavor that screams in an unfortunate whimper: I am mystery meat.

I'm going to be generous here, because the simple toppings were definitely the star of the show. Both the nicely melted cheese and the  ketchup were the burger’s saviors; both were applied generously enough to rather effectively  mask the patty’s inherent flaws. A hint of mustard offered a hint of kick, and the pickles were a spritely distraction.

Even the fried onions were nicely cooked, soft and sweet and ready to complement the nice greasy, flavorful beef patty that could have been part of the picture.

At just over $4, this burger is relatively cheap. But it’s proof that – nearly every time – you get what you pay for.

I really do like the custard at Kitt’s. And this burger might make me love it even more.

Kitt’s Frozen Custard is open daily from 11 a.m. to midnight.

On the Burger Trail: The Big Boy Style Burger at McKiernan's Irish Pub

On the Burger Trail: The namesake "K" Ranch Burger at Joe's K Ranch