On the burger trail: The double cheeseburger at Kroll's East

You've got to appreciate the history in a place that dates back as far as Kroll's. The story begins in the 1930s. And it's up for debate whether or not Kroll's beat Solly's to the punch in terms of being the first to serve butter burgers.

You’ve got to appreciate the history in a place that dates back as far as Kroll’s.

The story of Kroll’s begins in the 1930s when Caroline and Harry Kroll began serving burgers at their hotel in downtown Green Bay. By 1936, their butter burgers were so popular, they opened a seasonal burger stand, later moving into a basement space of the former Labor Temple Auditorium. In fact, there's some debate about whether or not Kroll's beat Solly's to the punch in terms of being the first to serve Wisconsin's butter burgers.

After World War II, the Kroll’s sold the business concept to Harry’s sister, Isabel, and her husband, Dick Schauer. In 1945, the Shauers moved their business just southeast of downtown, establishing Kroll’s East. Meanwhile, Harry’s daughter Pat, who had been working with her parents for years, decided to continue the basement-level restaurant before moving to South Ridge Road in the 1970s. Her restaurant became known as Kroll’s West. 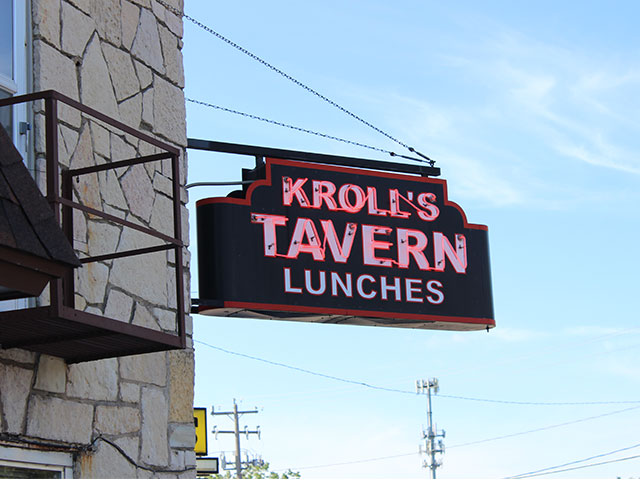 It’s difficult to say which location makes a better burger. Kroll’s West has grown in popularity thanks to its location across the street from Lambeau Field. But Kroll’s East, which was declared an historic landmark in 2010, has a loyal, almost parochial following. Some claim Kroll’s (one or the other) serves the best burgers in the state. I’m not sure I’d go that far, but there’s always a bit of truth in hyperbole.

Kroll’s East is still run by the Schauer family, and despite a remodel in the '70s, it’s still downright old school. And it’s quirky as heck. Take for instance the doorbells on the booths, which allow you to call your waitress. Or the fact that sandwiches are all served wrapped in waxed paper instead of on plates. Or the fact that the restaurant has probably six entrances (we recommend entering on the bar side just off of Irene Street). 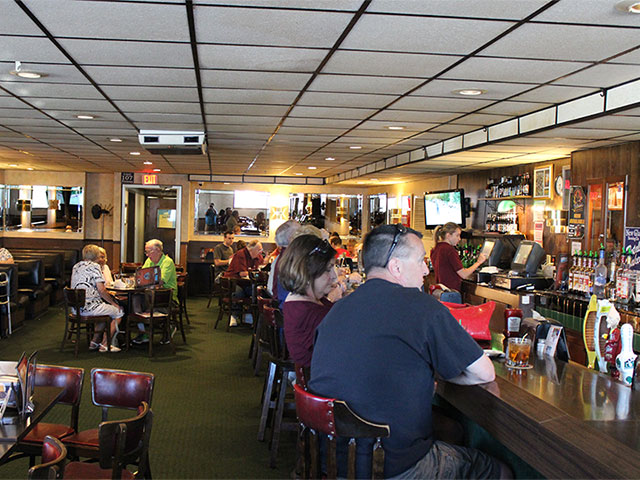 We sat at the bar, which is flanked by an old mirror and original green and black tile which is rumored to be original to the building. That was a strange thing to do, apparently – at least according to the waitress who delivered our food and remarked that she’d never delivered food to folks at the bar before.

I ordered a double cheeseburger "everything on," which means it came with "ketchup, raw onions, pickles and butter" for $6.05. You can get lettuce, tomatoes, bacon or onion rings added to your burger for an additional charge, but I chose to play it straight. I also ordered up a side of fries and a brandy old fashioned press.

The burger came wrapped in waxed paper along with a paper tray filled with fries. Once unwrapped, I noted that it was cut in half – a signature move at Kroll’s. Unfortunately, halving the burger doesn’t do its appearance any favors. And it contributes to the leakage of the precious butter from the burger. The burger was a bit fugly – but not enough to deter me from the eating.

The bun at Kroll’s is noteworthy. It’s a traditional hard roll (also called a semmel), which boasts a crispy top and a substantial body. As you can see from the photo, this double burger was enrobed in bun. Fortunately, it didn’t overwhelm the burger, which was a plus. The bun also gets points for two things: texture (it was nice to have a little crunch with my burger) and classic old school goodness.

And yes, you can substitute a spongy modern hamburger bun. But, why would you mess with a classic?

Sadly, the burger portion of the Kroll’s burger isn’t all that exciting. The menu boasts 100% Black Angus burgers. And maybe that’s true. But, the proof was in the eating. The burgers on my bun were super thin (⅓ pound total for two patties), tightly packed and perfectly round. So, the likelihood that it came to the restaurant pre-formed or even frozen isn’t a stretch. And although each burger was char-grilled on one side, it looked as if it had been steamed on the other (no grill marks, just pocked grey meat).

They were juicy – though that’s likely thanks to the butter, which was applied generously enough that it seeped out a bit onto the waxed paper in which the burger was served, but not so generously that it left the bun in a puddle (thank goodness). But, the flavor wasn’t anything to write home about. In fact, I found myself thinking it was pretty remarkable how much this burger relied upon the cheese and condiments for flavor.

There’s something very good about raw onions and ketchup. I mean, it does no favors for your breath, but I’d consider it a good match for a burger, especially when that burger needs a boost (as this one did). A good deal of flavor was also imparted by the well melted slices of sharp American cheese … and the pickles! And it was fine luck when you hit a pickle. In fact, I wish there had been more of them.

At just over $6, you can’t complain too much about the price of a Kroll’s burger. After all, you can add a brandy Old Fashioned and side of fries and you’re still looking at a meal under $15. Unfortunately, I had to dock them a couple of points based on the quality of the ingredients, particularly that beef.

Does Kroll’s East serve up the best butter burgers in the state? That’s debatable. But, there’s pure nostalgia in both the space and the burgers making it worth the stop nonetheless.

Kroll’s East is open daily from 10:30 a.m. to 11 p.m., with the exception of major holidays. It also observes slightly abbreviated hours during the winter months, so check the web site for details.