On the Burger Trail: Mainstream Bar & Grill in Waukesha

This family-friendly bar and grill in downtown Waukesha is a step up from the usual townie bar. Walls are painted in deep, warm tones with exposed brick gracing the back of the bar. Guitars hanging on the walls pay homage to the venue’s live music offerings, while myriad televisions offer up a view of the game from almost every direction. Meanwhile, an open kitchen at the end of the bar serves up a pub menu of grilled flatbreads, wings and burgers. 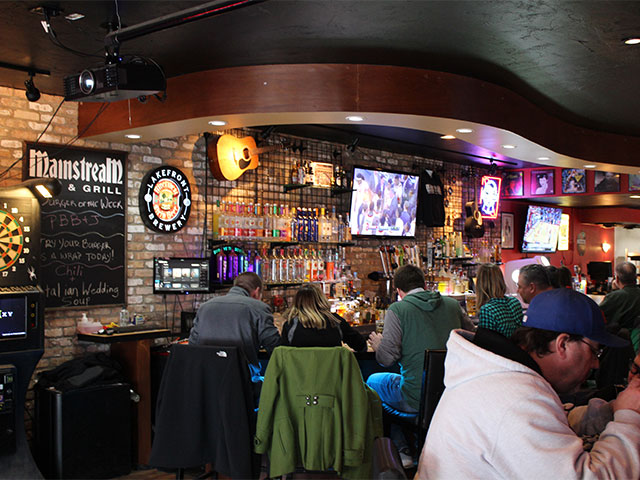 Mainstream’s twelve burgers make up the bulk of their menu. Meanwhile, a build-your-own section features both a choice of proteins (from a black bean burger to yellowfin tuna steak, turkey burger and certified Angus beef) and a broad selection of toppings from standards to more inventive options like peanut butter and cajun remoulade.

Despite all the choices, I thought it best to go with the Classic American, cooked medium-rare and topped with American cheese, fried onions, pickles, ketchup, mustard, lettuce and tomato ($10.95).

Served up in a simple paper lined basket, the Mainstream burger took center stage next to a healthy pile of crisp, skin-on french fries. The monstrous burger stood tall exposing its toppings which included melted American cheese, shredded lettuce, a thick slice of tomato, ketchup, mustard and pickles. A steak knife pierced the top of the burger, holding all the fillings in place and (maybe more importantly) offering a mechanism for cutting the monstrous beast into two more manageable pieces.

Despite its size, it was difficult to imagine that the nicely shaped toasted demi-brioche bun would hold up to the burger and fillings. However, it did remarkably well. It had just enough girth to support the toppings (which did have a tendency to slide around) while soaking up the juices from the hefty burger. No lie, it was a messy burger to eat. But the bun somehow made it through to the end without giving up the ghost.

Weighing it at a half-pound, the burger was big and juicy. It was cooked to a pretty perfect medium rare and well seasoned, with a pleasant char-grilled flavor. This was the first square burger I’ve encountered on this first leg of the Burger Trail. And I’ve got to admit, I also liked the way the corners stuck out just a bit from the bun, allowing me to bite into its juicy goodness unhindered.

Although the toppings were basic, they did their job. The cheese was melty and savory, the fried onions brought a bit of sweetness, the thick tomato offered a bit of juicy flavor and the shredded lettuce offered up a bit of texture. Both the ketchup and mustard were applied with a balanced hand, offering up a good amount of flavor without being overpowering. But it was the pickles that made the burger. Thick and crisp, there were just enough of them to ensure a bit of briny goodness in every bite. Delicious.

Yeah, this burger was spendier than some I’ve tried. But, even at $10.95 for the burger and fries, it was a fair proposition. The burger was well-prepared and filling. And although eating it was a bit of a juggle, it was a feat worth pursuing.

Mainstream’s burger is big, bold and well worth the drive to Waukesha. Be sure to try the crisp housemade potato chips (and dip) while you’re there.