On the Burger Trail: The Peppercorn Horsey at North Avenue Grill

North Avenue Grill is a haven for scratch-made diner style fare. So we figured it would be a good bet for a stop on the Burger Trail. Turns out the house favorite burger is a half-pound patty topped with bacon, cheese, onion strings and a tangy horsey sauce. And it was a treat.

Since opening in 2012, North Avenue Grill has served delicious scratch-made fare in a modern diner-style setting. And it seems the quaint space just keeps getting better. Mike Topolovich, who took over ownership of the restaurant in 2013 from former owners Jon Anne Willow and Mehrdad Dalamie, has made numerous changes to the restaurant including expanding the footprint of the restaurant into the laundromat next door to increase space in both the dining room and kitchen. 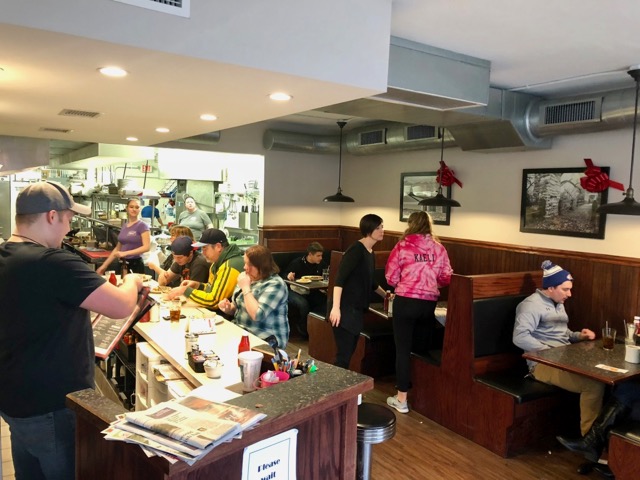 Despite its larger size, the restaurant is still serving up some of the best casual grub in the area, including a nice selection of diner-style burgers.

On my latest visit, I ordered one of the house favorites: the Peppercorn Horsey burger, which features a half-pound angus beef patty, hickory smoked bacon, cheddar jack cheese, onion strings and peppercorn horsey sauce ($11.99). It comes with a choice of sides including hand-cut french fries, coleslaw or fruit.

This is the sort of burger that comes out of the kitchen begging to be eaten. It’s graced with a good amount of melted cheese and piled high with nice-looking crisp bacon and a healthy pile of onion strings. The whole burger is held in place by a steak knife that keeps the whole composition from toppling over. In the end, if the combination of this burger’s appearance and its savory onion-string infused aroma isn’t enough to make you salivate, it’s time to check your pulse.

Based on both the color and flavor, the ultra-soft bun appeared to be made from an egg-based dough. It was ultra-pliable and not too sweet, making it a great choice for the burger, since it just sat back and held things together without overwhelming any of the other flavors.

The burger was delicious. It came out cooked a bit beyond medium rare (closer to medium, I’d guess) but despite that, it was and juicy with the perfect amount of grease (a must for a diner-style patty). It also sported just enough of a slightly crisped exterior from the flattop grill. The meat was moderately seasoned and nicely sized for the bun and its half-pound physique was well-balanced in comparison to the toppings.

In so many ways, the toppings were what made this burger shine. The sweet onion strings were ultra crisp with a nice sweet flavor, and they stayed crunchy throughout the burger experience (big plus!). In addition to not being greasy, they offered up fantastic texture in tandem with the slightly smoky bacon, which came out perfectly crisp.

Meanwhile, the horsey sauce was only vaguely peppery and slightly sweet with just a smidge of kick from the horseradish. Even better, there was enough of it to add a good amount of flavor, but not so much that it immediately made the bun (or the onion strings) soggy. I’m a lover of horseradish, but I think that, while the horseradish tasted nice and fresh, it wouldn’t be overwhelming even for someone who wasn’t as big of a fan.

As a side note, I really appreciated the fact that this was a burger topped with onion rings that didn’t come with the ultra-predictable addition of barbecue sauce. As good as that combination can be, it was nice to see something a bit more refreshing.

Overall, the Peppercorn Horsey is a well constructed burger with a flavor profile that’s simultaneously refreshing and accessible. At $11.99, it’s well priced, especially considering the mound of well-seasoned fries with which it comes. It’s not the sort of burger that will leave you hungry.

The Peppercorn Horsey is definitely a burger to put on burger bucket list.