On the Burger Trail: The Double Simple Smash Burger at Pete's Pub

Does this Simple Smash Burger deliver on the promise of greasy umami-filled satisfaction?

Named for owner Pete Marshall, Pete’s Pub is among the newest additions to Brady Street, having debuted with limited carry-out in May, not long after the COVID-19 pandemic began. Since then, the pub has more recently opened its doors at a reduced capacity for in-house dining and drinking, plus trivia nights on weekends.

The pub, which is located in the former Harry’s on Brady (a restaurant which brought a new vibe to the longtime Brady Street True Value), offers a menu of ambitious pub fare from snacks like Mexican inspired poutine, braised beef short ribs and burrata ravioli to chicken and cauliflower wings and sandwiches. Among them are two burger options: the Simple Smash (available as a single, double or triple, priced $9-$15) and the Hulk Smash! Burger topped with raw onions, Dijon mayo, pickle chips, pork belly, fried egg, extra sharp American cheese, lettuce, Roma tomato ($15).

Since I was getting carry-out, I opted for the simpler burger of the two (suspecting it would hold up better in transit, since it was a much simpler build): A Double Simple Smash, which comes with extra sharp American cheese, raw or fried onions, Roma tomato and lettuce. It’s served on a brioche bun with a choice of sides (house chips, hand-cut fries or coleslaw; you can sub in roasted veggies for $2 more) for $12.

Pro tip: If you’re ordering carry-out, go for the housemade potato chips over French fries; Firstly, they're good. Secondly, they hold up much better on the ride home. They are also delicious with Pete's onion dip (you can add a pint of that for $5). 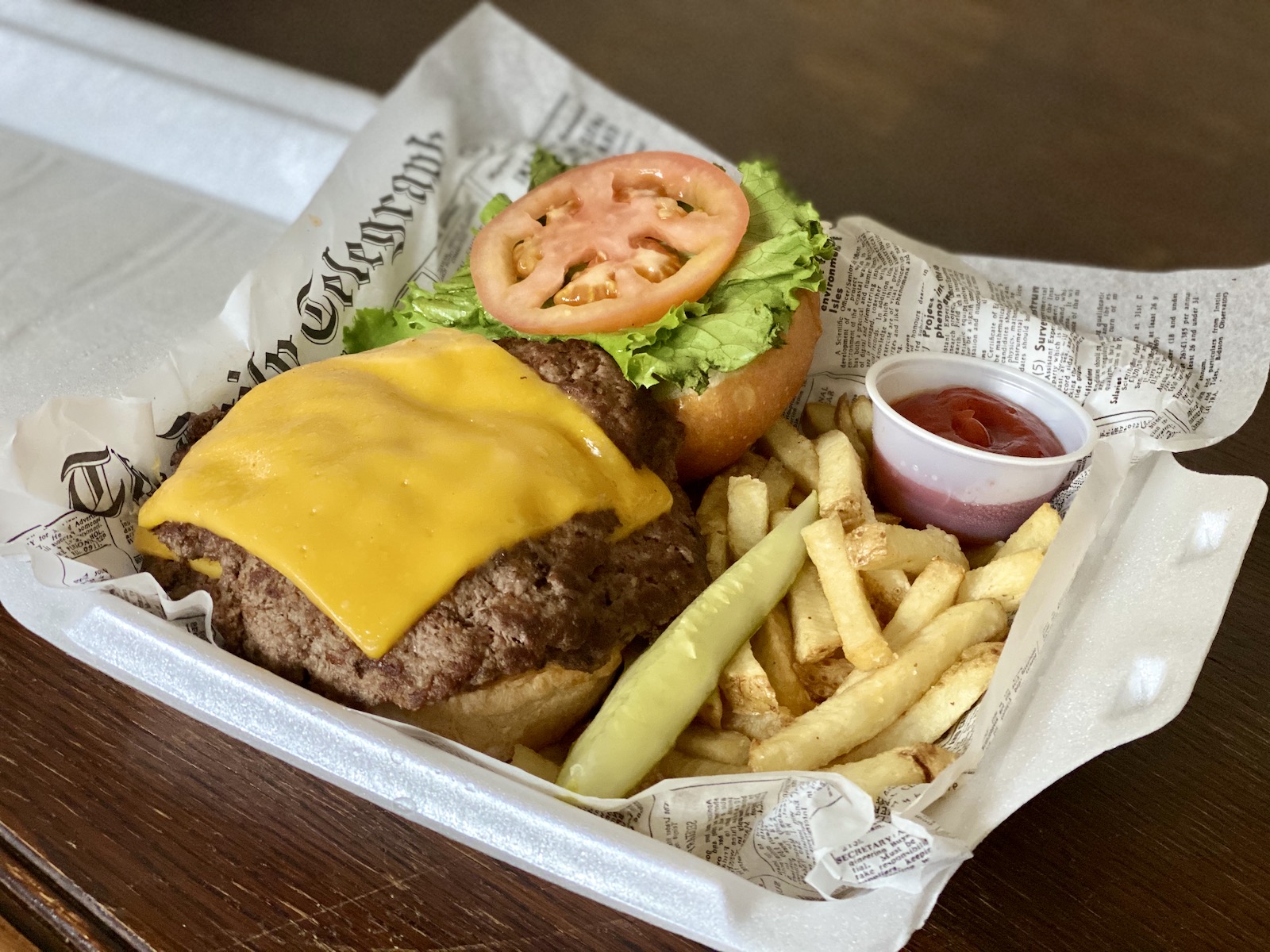 Overall the burger itself was smartly packaged, divided into a “hot side” and “cold side” to avoid steaming the bun. It wasn’t so great for the accompanying fries, which were pretty soggy by the time I got them home. But it made for a burger which unpacked well, producing a relatively attractive burger that stood tall and showed off two large sprawling beef patties, moderately melted cheese and a peek of lettuce and tomato beneath a lofty brioche bun.

The brioche buns at Pete’s are sturdier than some; but they still offered up a pleasantly sweet flavor and nice loft. They were also a nice match for the double burger, providing a good bun-to-meat ratio that didn’t overly favor either one. Unfortunately, it was missing one of the hallmarks of a well-prepared burger: a toasted bun. Neither of the cut sides of the bun showed any sign of toasting, a subtle detail in the preparation that makes a big difference in the texture, often the flavor and how well the bun holds up overall.

When it came to the patties, they were definitely smashed. The meat was smashed thin, giving it the irregular shape that’s expected from such a patty. It was also nicely browned on the exterior. What it didn’t have were the consistently thin, crisped (usually slightly salty) edges that make a smash burger such a distinctive delight.

For quality control purposes, I almost always dine with a companion (in some cases I’ll make multiple trips to a venue, eating the same burger more than once); both approaches allow me to get a feel for consistency, particularly with regard to preparation. In this case, I observed two burgers with similar qualities; but one had far more crisped eges than the other (the edges on mine were browned, but not crisped).

When it came to flavor, the patty was pleasantly beefy, with a nice clean flavor. It was tender, but it didn’t have that bit of greasiness that makes a burger feel indulgent. Similarly, it was seasoned minimally, an element that might have worked in its favor had the overall burger been built to accommodate that. However, in this particular case, it would have benefited from a slightly more aggressive approach to seasoning. Against the sweetness of the brioche, the burger meat didn’t shine quite as brightly as it could have.

Off the bat, I’m going to say that the sharp American cheese was a really nice choice. It supplied the needed salt and umami expected from a processed cheese (as well as superior meltability); but it also had the beautiful tang of cheddar, which lifted the burger up just ever so slightly and made it stand out from the crowd. The fried onions were also well prepared; they were soft and lightly browned with a pleasantly sweet flavor that meshed well with the meat and cheese.

On the vegetal side, the lettuce was fresh, more for show than function. But the tomato… well, it wasn’t the expected Roma variety (which did intrigue me when I read it on the menu). And, despite being at the end of local tomato season, it was sadly pale, with a watery unripe flavor.

But… what of the condiments? This burger wanted them. Whether a combination of ketchup and mustard or a house burger sauce that offered a sweet, salty tang, the burger needed that pop of moisture and flavor to bring it to the next level.

In my mind, it all comes down to balance. When a burger is designed, it should have everything it needs. It should be the burger creator’s ideal. That burger should taste good from the get-go because it was thoughtfully created to be so.

Where this burger fell short was in its overall composition. It wasn’t built as a complete package; and  – in  the end – that left it wanting.

At $12 (with a side), the Pete’s double is more than fairly priced, especially when you consider its generous portion of beef.

This burger looked beautiful, and with just a few tweaks, Pete’s Simple Double Smash Burger has the potential to be one for the books.

The kitchen at Pete’s Pub is open Monday through Friday from 11 a.m. to midnight and Saturday and Sunday from 8 a.m. to midnight. Carry-out is available (order online or call the restaurant for pick-up).