On the Burger Trail: The Bliss Burger at Route 76 Diner

When I visited the Route 76 Diner, a new 50s-era throwback restaurant located in the former Griddlers Cafe in Greenfield, I was very much looking forward to sinking my teeth into what I hoped would be a deliciously satisfying old school diner burger.

In this series, we’ll be hiking the burger trail to find the latest, greatest and most delicious burgers in Milwaukee. Click here for an explanation of the criteria used to rate each burger. Where have we been? Check out the complete catalog of burger reviews here

Earlier this year, Omar Hamden gutted the former Griddlers Cafe in Greenfield and created a 1950s vintage diner. The diner, which opened the first weekend in November, seats around 35 guests at both its old school counter as well as two- and four-top tables.

The decor is sufficiently distinct to offer a blast from the past. There's the classic black and white checkered flooring along with ruby red metallic diner chairs with silver striped backs. A collection of 45s and classic photos decorate the walls, which are painted bright red. And if that weren’t enough, an old school jukebox at the front of the restaurant pumps out hits from the '50s. 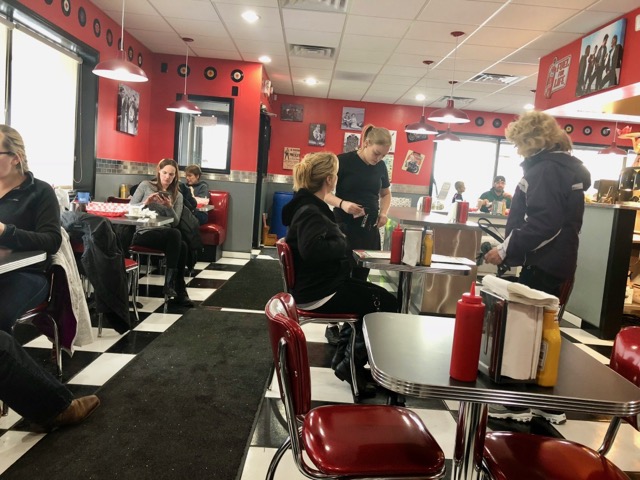 The diner serves up classic egg dishes, corned beef hash and chicken and waffles for breakfast and a menu of appetizers like chicken wings and jalapeno poppers along with sandwiches and burgers for lunch and dinner. Among the burgers is one that might be considered its signature. That's the Bliss Burger, which comes topped with a "jumbo onion ring and liquid gold on a toasted bun" and a side of crinkle cut fries ($8). And that's what I ordered.

I was hungry and definitely looking forward to sinking my teeth into what I hoped would be a deliciously satisfying old school diner burger. And heck, with a word like "bliss" in the name, my expectations were set pretty high.

Burgers are served in classic red baskets with matching checkered liners, which seems apropos. The burger itself was largely cloaked with cheese, but glimpses stood out darkly beneath the warm orange sauce in which three petite onion rings lingered.

The buns are standard, a more than appropriate choice for the throwback diner concept. They’re of average size and very soft, with the exception of the underside which came nicely toasted. All in all, the bun wasn’t exciting, but it held everything together and generally stayed out of the way.

Upon ordering, I was surprised to be asked how I wanted the burger done. I chose mid-rare, but in the back of my head, I wondered (doubtfully) how they’d manage to tackle such a feat with a thin diner-style burger. Although I hoped to be pleasantly surprised, the burger came out as I expected: distinctly not medium rare. It wasn’t well done (much thanks to the fact that it wasn't the super thin diner-style smash burger I expected) but it was definitely closer to medium well than medium rare. In my opinion, they’d be better off admitting that medium-rare simply isn’t possible than to push out a burger that will never meet the expectation.

As far as flavor was concerned, it was a bit of a challenge to get at the burger, which was buried under cheese sauce. But once I did, I found a uniformly round, tightly packed burger was minimally seasoned with salt and pepper. What should have been meaty instead tasted like iron, an element that seemed to be highlighted by the bitterness of the exterior char from the grill. Overall, the burger itself was relatively unremarkable on its own, and it needed the toppings to boost its flavor.

Unfortunately, I found the toppings (cheese sauce and onion rings) to be pretty average. The "Liquid Gold" cheese sauce was the equivalent of Cheez Whiz. In this case, that’s less of a judgment call and more of a description, since I’ve seen the gelatinous cheese used successfully in other applications. However, in this case, I just felt like it was a cheap substitute for something tastier. The onion rings added a bit of crispness on first bite, though as the cheese sauce soaked into their breading, they grew increasingly soggier.

Normally I’d say $8 was a more than fair price for a burger and fries. But I found myself wondering if I’d go back for this one. And the truth is, I probably wouldn’t.

Maybe it was a case of reality not meeting expectations. Nonetheless, in the end, there was little bliss to be found in the Bliss Burger.