On the Burger Trail: Sal's Pub & Grill in Menomonee Falls

This week's stop on the burger trail - which was recommended by OnMilwaukee reader Lillian Lakritz - took us to Menomonee Falls, where we visited Sal's Pub & Grill, a low-key bar and restaurant which offers up an expansive list of pub fare.

This week’s stop on the burger trail – which was recommended by OnMilwaukee reader Lillian Lakritz – took us to Menomonee Falls, where we visited Sal’s Pub & Grill.

If you judge it by looks alone, Sal’s is more a bar than a restaurant. Not quite divey but not exactly upscale, it’s the sort of place you envision is probably the equivalent of a Falls version of "Cheers."

The atmosphere was clean and attractive. There was a pleasant din at the bar, where regulars chatted with one another and the bartender. There were also televisions for watching the game and a back room where folks can engage in a game of pool. Menu boards on the walls offer up a fairly robust list of pub fare, including burgers, pizzas, sandwiches and options for Friday fish fry. 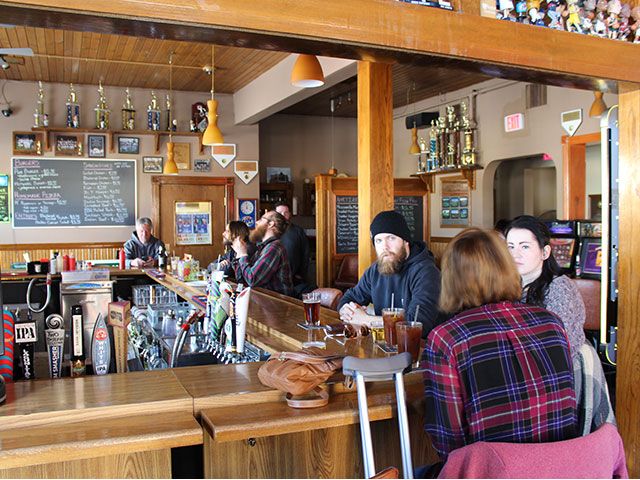 On our visit, I opted for the Pub Burger, which comprised a one-half pound Angus patty, cooked to order and topped with sauteed mushrooms, fried onions, Swiss cheese, lettuce and tomato for $8.95. I added fries for an additional $1.

The burger arrived in a basket alongside a generous serving of fries and a small cup of vinegar-based coleslaw. The burger’s top was laid to the side, revealing a thick, hand-shaped patty dappled with melted bits of shredded Swiss cheese that barely covered a sprinkling of fried onions.

The bun itself was a stately looking Kaiser-style roll with a soft pillowy interior and a slightly crisp exterior. At first glance, it seemed a good size and shape to accommodate the half-pound burger. Unfortunately, despite being toasted, the bun stood no chance against the juiciness of the burger, which dripped profusely with every bite. By the end of my meal, the top was flattened from gripping, and the lower bun was soggy and doughy (sad trombone).

Sal’s gets points for its burger, which came out cooked to a perfect medium-rare. It was loosely packed and very juicy with a fresh flavor and pleasantly beefy, irony flavor. The burger blend itself didn’t appear to be seasoned, but there was a hint of salt on the exterior, which gave it just enough flavor.

Interestingly, against the flavor of the juicy burger, its toppings were relatively bland. The mushroom flavor was overwhelmed by the beef, and there weren’t enough onions for them to play much of a role in each bite. Sadly, I found myself reaching for ketchup and mayonnaise to up the flavor quotient, a fact about which I was ultimately disappointed.

Sal’s burger is a hefty sandwich. And while it might need a few condiments to make it shine, it’s a fair deal at under $10.

In the end, if you’re looking for a juicy, juicy burger, the sort that drips down your arms when you eat it, you’ll find that at Sal’s.