On the Burger Trail: The Big KC Burger at Swingin' Door Exchange

The Big KC -- which we assume is named for Mr. Swan himself -- features a half-pound Black Angus burger topped with white cheddar cheese, grilled onions, shaved roast beef, bacon, pepper-jack cheese and mayonnaise on a sesame seed roll for $12.50.

And that’s part of the charm of this old-school "Saloon & Eatery," which still hearkens back to an era when stained glass windows and ornate wooden bars were the norm and hospitality was the name of the game. 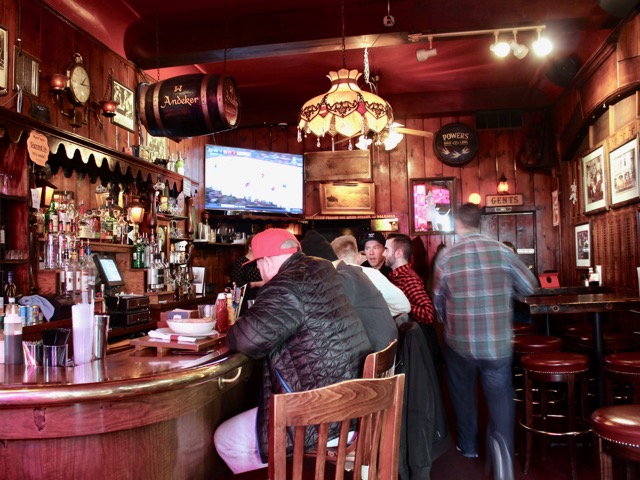 Although you can build your own burger at Swingin’ Door, that’s not really an option for me. After all, my job isn’t to create a great burger and write about it; it’s to let you know how successfully different venues are in creating burgers that are both mouth-wateringly delicious and worth their price tag. In that arena, Swinging Door has two creations: their patty melt and their Big KC Burger. And, although I love a good patty melt, alas ... this isn’t the patty melt trail.

I’ll admit, the KC isn’t a burger I probably would’ve ordered based on the menu description. Judge me as you will; but I was just "so-so" on the idea of topping a burger with roast beef (a good burger, after all, shouldn’t need any more beef flavor). But, the look of this burger alone made me reevaluate. From its lovely bun to its neatly criss-crossed bacon strips, it was a mighty nice looking burger. And I found myself looking forward to diving in.

That Sciortino’s roll is a good choice for this burger, which didn’t need to be embellished with anything more than a solid, yeasty cradle. Its texture was pleasantly soft, with a bit of chew -- an aspect which reminded me (if vaguely) of the old school hard rolls my grandparents used to bring home on Sundays after church.

Perfectly charred. Pleasantly salty. Tender. Meaty. It took me a bit to isolate the burger, which was nicely covered by melted cheese and a cloak of roast beef. But, those are all words I’d use to describe what lay beneath. It came to our table medium-rare, as ordered. And it was tasty enough to stand on its own: a very good thing, indeed, and one that boosted this burger’s score swiftly to the top.

Again, this was such a nice surprise. The roast beef, though probably gilding the lily, did add a meaty component to the burger which I quite enjoyed. The bacon was crisp, giving the burger a nice texture, and the flavor from the onions came through… though, interestingly enough, I had a hard time finding the onions themselves. It could have been that they were buried under the cheese, which was melted nicely and strategically placed to keep the other toppings under control.

Priced at $12.50, the Swingin’ Door burger is a fair deal. Not the cheapest, but also not the most I’ve paid for a burger (some of lesser quality). It’s hefty and filling. And it’s tasty to boot.

I’m giving this burger a nice big nod. I’d eat it again, and you probably should too. If you need to feel slightly more virtuous in your decision, order the spicy vermouth carrots (also good) on the side instead of fries.

On the Burger Trail: The Smoked Brisket Smashburger at Sweet Smoke BBQ

On the Burger Trail: The Crafthouse Cheeseburger at Central Standard

On the Burger Trail: The HotWax Burger at HotWax by Meat & Co.