Amid its Mediterranean-inspired offerings, Tre Rivali's lunch menu also offers two burgers. Among them is the beef burger, topped with fontina, bacon jam, herbed aioli and a sunny-side-up egg.

If you ever have the yen to spend an afternoon feeling urbane and spoiled, just take a walk through Milwaukee’s Historic Third Ward. You needn’t spend a penny to take in the bustle of the myriad shops or experience the spirit of this lively upscale neighborhood.

But you’d be remiss if you didn’t invest a few dollars in a meal at one of the area establishments. Among them is Tre Rivali, conveniently located in the center of the neighborhood at the Kimpton Journeyman. In the cooler months, it features a plush, cozy interior. And, in the summer, it offers well-appointed sidewalk patio dining. 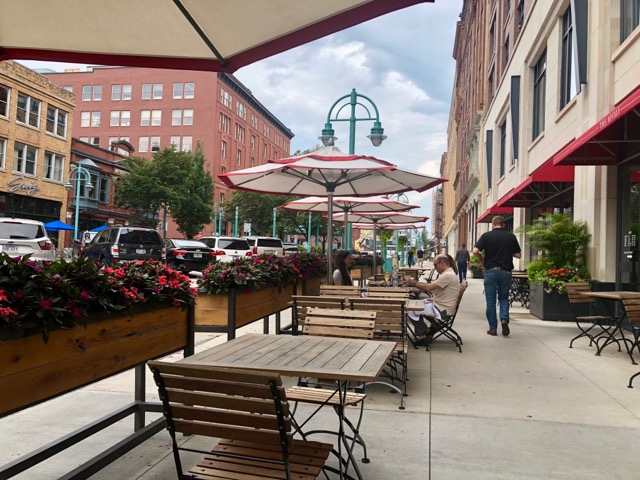 The restaurant’s Mediterranean-inspired dinner menu is a refreshing departure from the usual, featuring items from expertly charred octopus to housemade pastas and comforting entrees flecked with inspiration from Spain, Italy and the Middle East. Meanwhile, the lunch menu is similarly inspired, but far more casual. And on it you’ll find two burgers. A lamb burger is topped with an inspired blend of tomato jam, tahini yogurt sauce, cucumber and feta cheese.

Meanwhile, the Beef Burger features a half-pound patty (cooked to order) topped with fontina, bacon jam, pesto aioli and a sunny-side-up egg ($17). It's served with a choice of french fries, soup or salad.

Interestingly, it’s the perfectly prepared sunny-side-up egg that steals the show when it comes to this burger’s presentation. Its edges drape perfectly down the side of the burger, which is otherwise covered with a sheen of melted fontina cheese. The myriad vegetable add-ons are also prettily displayed on the side, ready to be added to the burger or eaten as-is. The artful ceramic plate on which it's all served up is gorgeous, but it's a mere backdrop for the food itself.

I’m not always a fan of pretzel rolls; they really need the right burger to make them shine. In this particular case, that’s exactly what happens. The bun’s alkaline-dipped crust shines in the presence of the other ingredients, and it also holds up really nicely to the juicy (and inevitably messy) burger.

As I’ve oft stated, quality beef that’s been treated and cooked well is the heart of any stellar burger. And – despite being upstaged visually by the egg – the beef patty is king of this burger. Not only was it prepared well and served up a solid mid-rare, it was well seasoned. Its shape belied hand-pattying, and its exterior was nicely caramelized.

As far as its flavor, this burger was truly beefy. It’s meatiness carried with it a delicious funkiness, almost as if it had been dry aged, though that wasn’t indicated in any way on the menu. And that meatiness was only complemented by deftly applied seasonings (notable moreso on its exterior than interior). Definitely a burger I’d tackle inside or outside its bun.

Similarly, the toppings stood out for a number of reasons. First, all were well executed. The bacon jam was sweet and slightly smoky, while the pesto aioli brought in herbal and vegetal elements along with a bit of fat and saltiness. That perfectly cooked egg offered up just enough yolk to enhance the richness of the meat, much as it would in the case of a well prepared tartare. The flavors were also impeccably balanced. Sweet mingled with savory, and there was plenty of umami to complement the meat’s beefiness.

The lettuce, tomato, pickles and onion on the side … well, they never made it to my burger. But they were fresh and delicious. I eagerly ate the tomatoes out of hand; they were filled with the flavor of the summer sunshine (obviously well sourced and not of the mundane food service variety). The same was true for the lettuce, which was crisp and green and the sliced red onion, which was crisp and sweet.

This is easily the priciest burger I’ve eaten thus far on the burger trail. But it’s tough to judge a burger that comes to the table with so much value in terms of fresh, well-flavored ingredients. The patty is skillfully prepared and the toppings are flavorful and balanced. And – in the end – I’m more than happy to pay for a burger that showcases care in sourcing, preparation and flavor.

The Tre Rivali burger is a worthy indulgence. Get one while you can still take a seat on the restaurant’s sidewalk patio; it tastes even better paired with fresh air and sunshine.