On the Burger Trail: The cheeseburger at Triskele's

Regulars rave about Triskele's housemade macaroni and cheese, the Tuesday night mussels specials and the $5 food specials on Thursday evenings. But the burgers also have a reputation, prompting us to give one a try.


Triskele’s is the sort of place that flies a bit underneath the radar. It’s tucked away on Maple and 3rd Streets in the residential area just southwest of the bustling Walker’s Point restaurant scene. 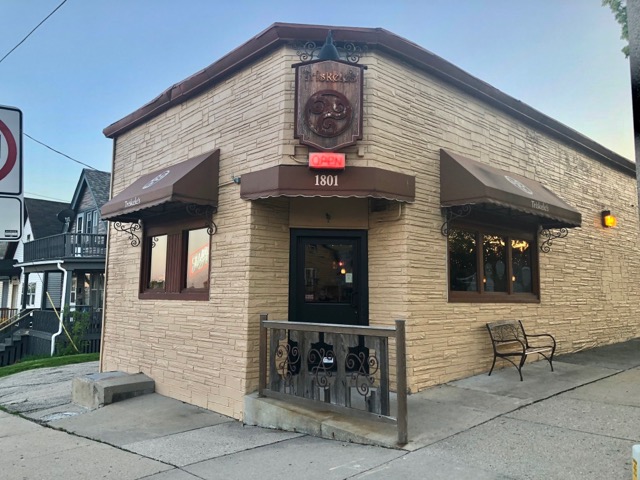 In fact, Triskele’s, which opened in late 2007, has been around longer than most of the restaurants on the 2nd Street strip. Inside, it’s a cozy understated spot with a dimly lit dining area and an open kitchen just behind the bar where customers can glimpse co-owner JoLinda Klopp, who made a name for herself cooking for years at the former River Lane Inn in Brown Deer, sautéing vegetables and cooking the evening’s specials.

Regulars rave about the housemade macaroni and cheese, the Tuesday night mussels specials and the $5 food specials on Thursday evenings. But I’ve also heard enough about the half-pound burger that I thought I should give it a try.

Triskele’s burger features a half-pound Black Angus patty with housemade pickles, Romaine lettuce on a toasted brioche bun. You can add aged cheddar, Swiss, goat cheese or gorgonzola for just 75 cents and your burger comes with a cup of soup, chili spiced fries or a side salad ($10.50 or $11.25 with cheese). Of course, if you’re the frugal type, you can get a burger for just $5 during happy hour, which takes place Tuesday through Saturday from 4 to 6 p.m.

The burger’s assembly was a bit disheveled, but it was attractive enough to get the attention of this hungry diner. The lettuce and pickles added a nice fresh look, and the goat cheese was visible and plentiful enough to offer flavor to every bite.

Brioche was a nice choice for this burger, which otherwise contained a mix of salty, sweet and tangy flavors. It was soft, glossy and nicely toasted, and, although the burger was slightly larger than the bun itself, there was enough bun to contain the filling and keep the burger manageable for eating out of hand.

The burger itself, which is more flat and less thick than some half-pounders, is hand-pattied, as evidenced by its slightly irregular shape. The burgers are cooked to order, though my request for mid-rare was met with a patty that was solidly medium. It wasn't as juicy as some; but it wasn't dry either. It it was beefy and well-seasoned, with just enough salt to provide a foil for the sweet brioche and accompanying pickles.

The burger’s toppings are basic, but I found them to be quite delicious and a bit different from those I’ve found elsewhere. The lettuce was crisp and fresh; it was also chopped, which meant it was well distributed on the burger and you got a bit of texture with each bite. The pickles were thick and crisp and flavored with a brine that’s more sweet than sour. I was surprised, since I expected them to be sour dill pickles; but I very much liked the flavor; it was a nice counterpoint to the saltiness of the burger. It also complemented the optional goat cheese, which was tangy and flavorful.

My dining companion ordered the burger with gorgonzola, which was also a nice choice. Altogether, the flavors were nice and balanced; maybe most importantly, the burger didn't need additional condiments for added flavor or moisture.

At just over $10, this might well be one of the most affordable half-pounders in the city. And if you order it at happy hour … well, you simply can’t beat that deal.

This simple satisfying burger doesn’t rely on any frills; but it’s a tasty value-driven find.