On the Burger Trail: The Cheez-It Burger at Uncle Wolfie's Breakfast Tavern

Love Cheez-Its? Ever had them on a burger?

There’s a fair amount of whimsy in the offerings at Uncle Wolfie’s, a tavern created expressly to bring people together over signature offerings like the BELTCH (bacon, egg, lettuce, tomato, and cheddar) and other amusingly named dishes like the “Wolfundito and “You CAN Make Friends with Salad.”

But, if there’s one thing Uncle Wolfiie’s has demonstrated over the past two years, it’s that there’s also substance (and a drive for continual improvement) behind the dishes they serve and the hospitality and welcoming vibe that’s served alongside.

It’s been about 18 months since I’ve reviewed one of their burgers; and even that burger (the hamburger with cheese) has since been revised to include the Tavern’s signature smash patties. So, when I saw the Cheez-It Burger on the menu as one of their quarterly sandwiches, it seemed like a good time to pay another official visit.

The Cheez-It Burger features two smash patties, honey-brined jalapenos, Cheez-Its, muenster, sharp cheddar, Cheez-It aioli, and bacon ($16). It’s served with a generous portion of house French fries; but, if you’d like, you can sub in tavern or sweet potatoes at no charge. You can also sub a side salad with ranch, white balsamic, pumpkin balsamic or creamy lemon tarragon dressing for +$3. You can also add a variety of additional toppings (and yes, even “put an egg on it) for a slight upcharge. 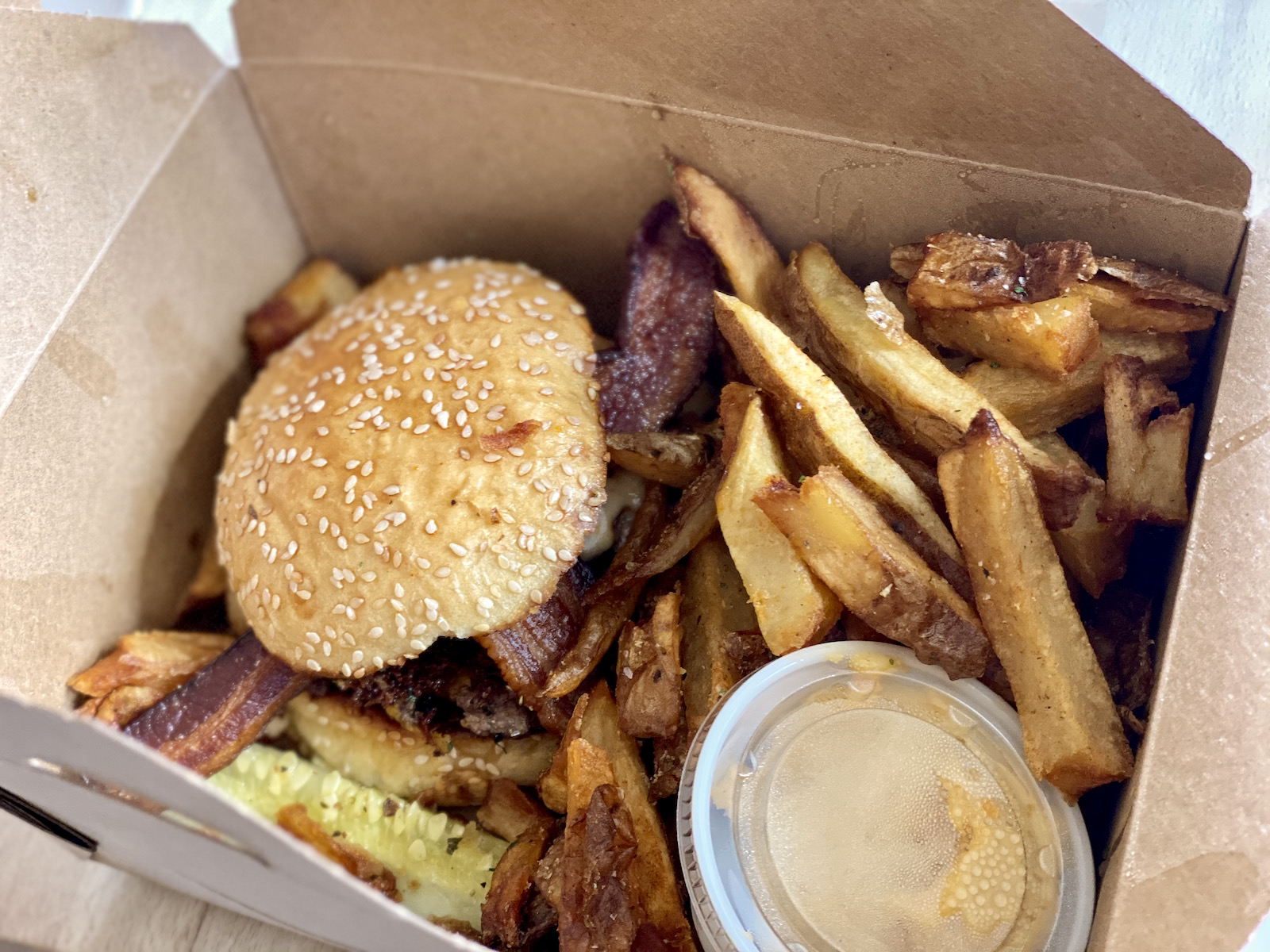 The burger and fries were packaged together in a waxed paper carry-out box that did accumulate some condensation (the fries took most of the impact from the added moisture). Remarkably, the burger itself sustained little harm. A few of the Cheez-Its escaped from beneath the bun (as shown); but the burger made a good showing with its sesame-studded bun, glossy browned patties, melty cheese and criss-crossed pieces of bacon (still glistening with fat).

The bun was light brown and amply soft. Its interior was impeccably toasted (golden on both the top and bottom, enough so that it had a subtle crunch). It was sliced in a fashion that made it slightly thinner on top (thus thicker on the bottom); but that worked to its advantage, allowing any juices to drip onto the lower half without destroying the bottom layer.

The two patties were definitely smashed, though maybe not as evenly as they could have been (some portions were thicker than others). That caused it to lose a bit of its smash patty appeal, enabling lovely crisp edges in some areas, but not in others. The patties were moderately beefy and seasoned, but they were not overly salty, leaving room for the bacon, cheese and Cheez-its to round out that element.

This burger hits plenty of solid notes with its balanced collection of toppings (which ended up being far less “out there” than I would have expected). There was a good deal to note, from the way the flavors played off of one another to the textures they created, all of which contribute to an enjoyable eating experience.

We'll start with the cheese. I’m always happy to see folks play with cheese combinations that work well together, as a duo of cheeses is often better than a single type on its own. In this case, the Muenster itself is creamy and soft, with a somewhat delicate flavor that tends to get lost on a burger. Sharp cheddar is stronger in flavor, but benefits from the Muenster’s creaminess.

The thick-cut bacon was cooked until well crisped (but not overdone), with flavor that was meaty, moderately salty and smokey. Because it was well prepared, it offered a nice crunch, some extra meatiness and that lovely salty smokiness any bacon lover appreciates on a burger.

Then there were the honey-brined jalapenos, which offered so much to the composition: a bit of sweetness, a slight pop of unexpected heat and just the right vegetal distraction from all that rich meat and cheese.

The Cheez-It aioli (which I’d ordered “on the side” to ensure it didn’t contribute to making the Cheez-its on the burger soggy) was somewhat thick and spreadable with both a flavor and texture that reminded me of processed cheese spread; but it was far less salty. It’s contribution? When spread on the top bun, it added a slight sauciness and a creamy mouth-feel while underscoring that classic Cheez-it flavor.

And the Cheez-Its? First off, they held up surprisingly well. Every single one was crisp and cheesy, even after transport. And, yes, there were just enough of them to lend that slightly greasy, cheesy flavor (and plenty of texture with their crackery crispness) to just about every bite of the burger. As brilliant as adding potato chips to a deli sandwich for crunch, the Cheez-Its here were more than a gimmick. They had a role to play. And that’s exactly how it should be.

The value of any burger lies in more than quality ingredients and execution (though both play a role); it’s also about the product as a whole. The Cheez-It wasn’t a perfect burger; had it not turned out to be as satisfactory as it was, I may have balked at its $16 price tag. But it was both playful and nicely balanced, offering up a spark of nostalgia (and a smile) on a cold, winter day during a pandemic. It was also served with a heaping pile of fries that could have easily fed two (the photo above showcases only about half of them). So, no complaints here.

If you are a fan of both Cheez-Its and bacon cheeseburgers, this creative take is likely to spark a bit of classic snack joy.