On the Burger Trail: The Big Wayne at Cedarburg's Wayne's Drive-In

Wayne's Drive-in turned 20 this year, but if you didn't know you'd be likely to guess it was much older. After all, it's got the look and feel of a restaurant built in the 1950s, and burgers with distinctive Wisconsin flair.


Wayne’s Drive-In turned 20 this year; but if you didn’t know that, you’d be likely to guess it was much older. After all, it’s got the look and feel of a restaurant built in the 1950s – from its classic exterior to its old-school interior, which comes complete with red, white and blue decor; black and white tile floors; counter seating and walls littered with vintage license plates and enamel signs. 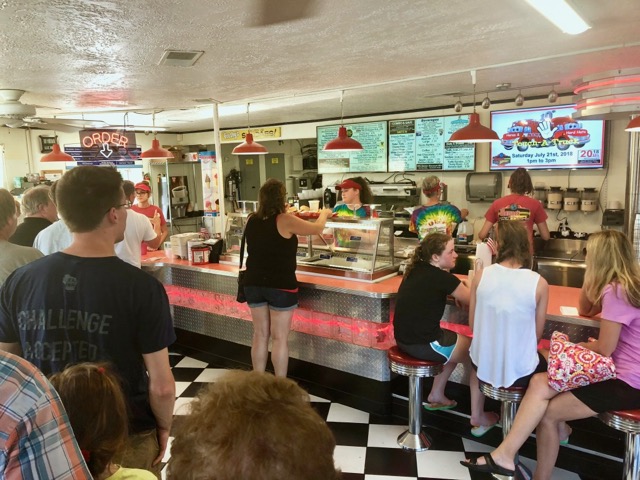 The 12-sided building was originally destined to be a Harley-Davidson dealership, but when the Cedarburg businessman who built it didn’t get rights to the franchise, Wayne Houpt purchased the property.

From there, it was converted into a 1950s-style drive-in, complete with a cupola and tower on top. In the early days (c.1998), there were even car-hops who delivered food to your car on skates. But that tradition has been since retired (sad trombone). 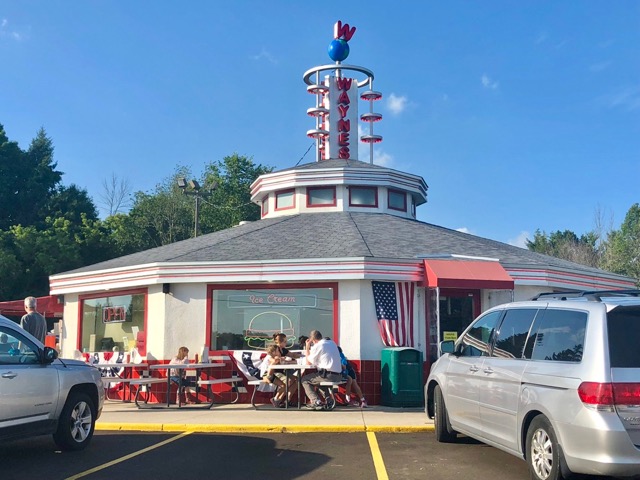 Today, you can pull in, order at the counter and grab a table inside (if there's room) or outside at a picnic table. On nearly any night all summer long, the restaurant is a popular spot to bring the family for char-grilled burgers, malts and sundaes. And on Thursdays the lot is packed with classic-car enthusiasts who motor out to the drive-in to show off their wheels.

On my latest trip to Wayne’s, I ordered up what could be considered their signature burger: The Big Wayne. It’s a half-pound double cheeseburger with double bacon, lettuce and tomato ($8.20). You can also get onions (raw or fried) for no additional charge. Add French fries or tater tots for an extra $3 or onion rings for $3.95.

The Big Wayne is a handsome burger that shows off its double-decker patties and melty cheese in a neat, layered stack. And despite the fact that it comes in a humble paper tray, it doesn’t need any tszujing to make it more drool-worthy.

Sheboygan-style hard rolls aren’t everyone’s jam when it comes to burgers, but at Wayne’s this style of bun is a nice choice. Not only do they give the burgers a distinctive Wisconsin style, but the buns are super fresh and nicely grilled. They have the crisp exterior you’d expect, and a bit of toothiness, but they’re soft enough that taking a bite isn’t a chore. They also hold up nicely to the burger and toppings, which is exactly what a bun should do. As an added bonus, gluten-free hard rolls are also available for an additional $1.

The burger patties – which are made from Black Angus Choice ground chuck steak – were nicely charred, enough so that they had beautifully ultra-crispy edges. They were adequately seasoned and beefy in flavor, with just enough moisture that they didn’t seem at all dry, despite being cooked well-done. I'm sure the generous pat of butter that accompanies them helped (another nice nod to the Wisconsin butter burger tradition). It offered the burger a touch more fat without making it a drippy disgusting mess.

As for the toppings, they were fair overall. There was plenty of cheese, and it was fairly well-melted (only the edges were a bit cool upon arrival). The leaf lettuce wasn’t particularly crisp, but it was fresh and beautifully green. The tomato was juicy and mild, and my fried onions (which were actually sauteed, potentially in butter) still had a bit of crispness to them. I missed the umami of a well-fried onion, but I did like the bit of texture they added.

The one ingredient I could have done without was the bacon, which was ultra-thin and round, much like the bacon you find at a number of fast food joints. It definitely added a salty component, and maybe a tinge of smoke, but it didn’t have the robust crispness and flavor that really makes bacon shine on a burger.

The burger doesn’t come with condiments. But, in the end, I did choose to add ketchup and mustard, mainly to give the burger the balance that a vinegary element (like pickles) often contributes.

At just over $8, this burger is a little on the spendy side, certainly more than most burgers of its ilk. Fortunately, the half-pounder was pretty darn satisfying, and little touches like the old-fashioned hard roll and pat of butter made it unique enough to warrant an extra buck or two.

Take a mini-road trip to Cedarburg for a bit of nostalgia and a burger that’s distinctly Wisconsin.

Wayne’s Drive-In is opens seasonally; catch them beginning the first Monday in April through the second Sunday before Thanksgiving. Hours are 11 a.m. to 9 p.m. during the summer and 11 a.m. to 8 p.m. in the fall.