Milwaukee as it could be. That's how artist John O'Neill approaches his unique, colorful, engaging and action-packed Milwaukee Envisioned series of drawings of the city, which mash up the past, present and potential future of the Brew City.

Milwaukee as it could be. That’s how artist John O’Neill approaches his unique, colorful, engaging and action-packed drawings of the city that form his Milwaukee Envisioned series.

What I love most about the drawings – in addition to the way O’Neill mashes up the past, present and potential future of the city – is the fact that they’re populated with a kind of density that looks more like New York, London or Beijing than Milwaukee. 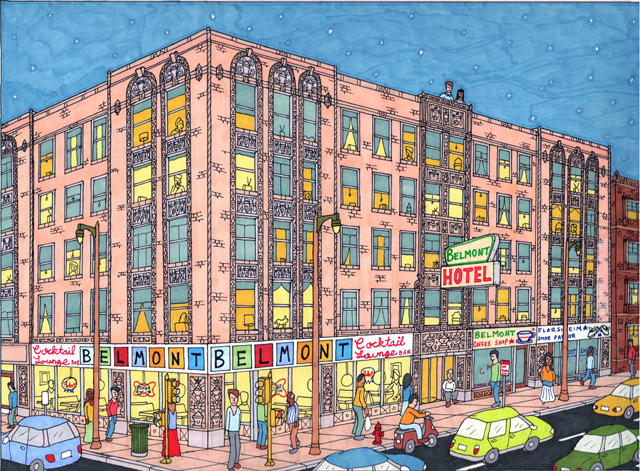 "I have drawn two major city series before – one themed off of Istanbul and the other off of Mexico City," says O’Neill, who studied urban planning. "That said, this Milwaukee one is the largest and longest-spanning that I have done. I think the initial drawing was based on a complaint I had about the massive highway trench that divides Downtown from Marquette and then I moved onto drawing City Hall and got positive feedback that motivated me to keep drawing them.

"I feel like a lot of people have gotten excited seeing the work of this place that is so familiar but with the infusion of my style and colors. I have drawn a lot of buildings based on images brought to me by the Milwaukee Historical Society. They really have an amazing collection of images of the city and I really enjoy seeing their daily postings on Facebook. Those have without a doubt influenced me and driven me to make more work. Even though I have now plotted an end to the project, I’ll then see a new photo posted on their page and think ‘wow I need to draw that, too.’"

O'Neill has done 43 8-by-10 Milwaukee drawings and plans to do about 10 more. He uses a pencil initially, on 9-by-12 Bristol paper, and then uses a fine point black pen. After erasing the pencil lines, he says he pens the exterior, adds details and colors with brush pens, "like it's a coloring book." In fact, O'Neill says, he's thinking of creating a coloring book of the works. 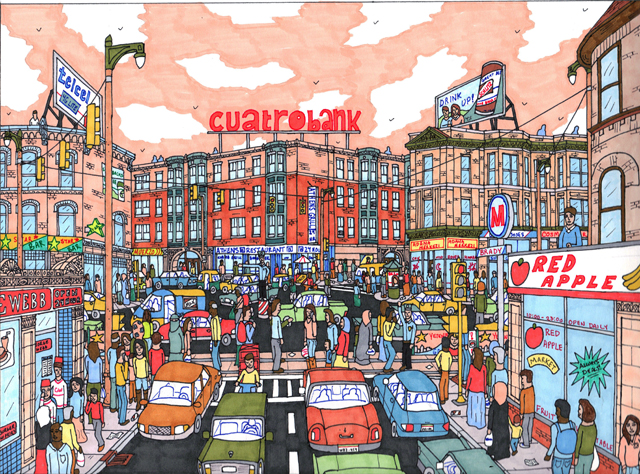 Some are tributes to the past – like his rendering of the Belmont Hotel or the old Detroit Street/Jackson School in the Third Ward – while others are explorations of what could be. Like an imagining of West Kilbourn Avenue with a tree-flanked promenade running down the middle. This one is one of those mashups, showing the long-departed Republican House hotel, in addition to current sights like the Hyatt Regency Milwaukee and that potential future: the trees. 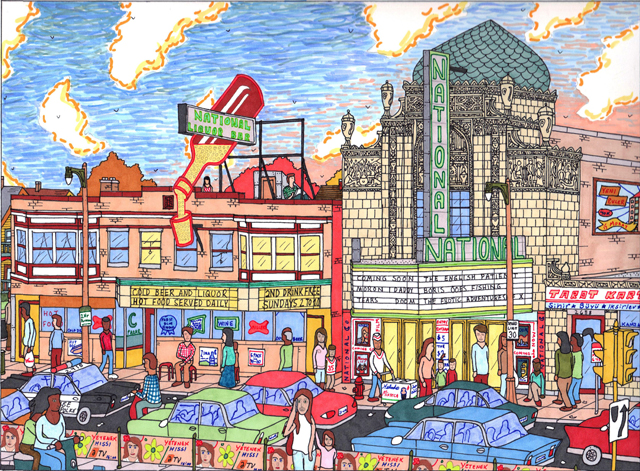 The National Avenue of the past.

"Buildings slant, people sell things on the street and they hang out on roofs. I have been able to travel a lot over the past two and a half years of living in Milwaukee and feel like I have been able to cherry pick a lot of my favorite things from world cities and put them into our own city."

O’Neill, who works as a development associate for a real estate company, understands the unmatched influence of architecture – good and bad – on the city’s landscape and his philosophy heavily informs these images.

"The depictions of buildings lost are not nostalgia for a lost period but restoring the best of our city’s architectural legacy with some of the great buildings we have lost with a new modern and worldly sensibility," he says. 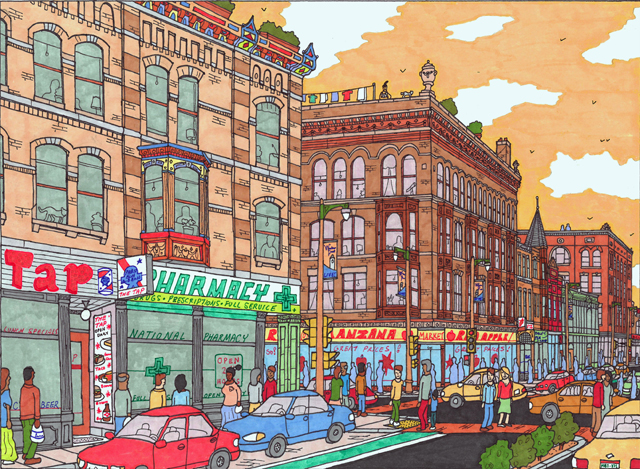 "The buildings depicted are all things that we once had and could have again were we to devote ourselves once again to great design and prioritize architecture and the common good over dollars and cents alone. I saw in Berlin them building their lost great buildings once again – I felt hugely inspired by that. I’m an opponent of the greed, the culture of disposability that have created so many of our indiscernible and awful places that drive people away – often literally. Architecture is one of our city’s assets and I wanted to enhance the present with all that we have lost."